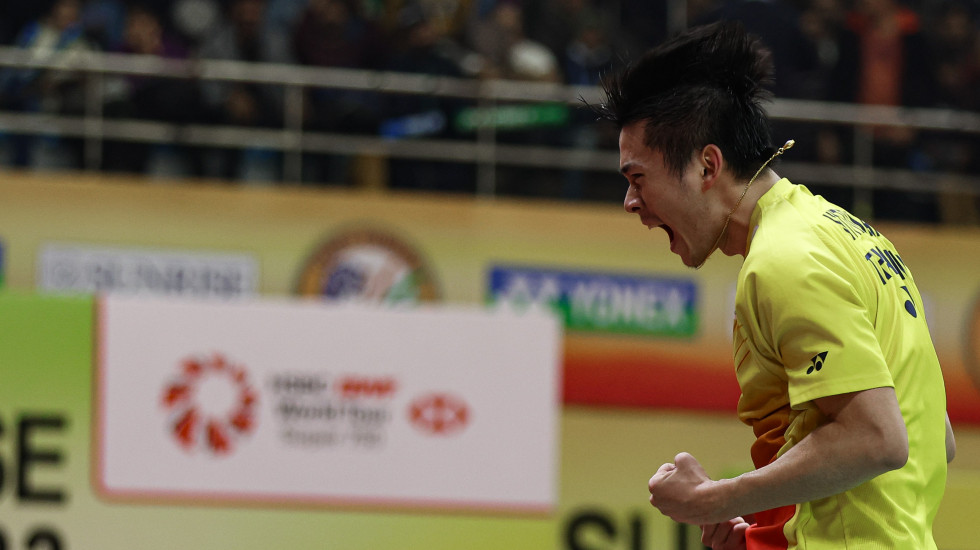 And so, after 13 straight wins in finals, Viktor Axelsen got to taste defeat. It came against Kunlavut Vitidsarn, who hadn’t taken a game off the Dane in six previous meetings. The David-Goliath story closed out the YONEX SUNRISE India Open 2023 on an unlikely, yet exciting note.

Going into the final, Vitidsarn had talked about every match against Axelsen being an opportunity to learn. Today he showed he’d learnt the lessons, and that he could put them to good use as well. The Thai turned in a finely calibrated performance, a steady, fast-paced counter-attacking masterpiece that wore down his bigger and harder-hitting opponent.

So tight did he keep the shuttle to starve his opponent of opportunities that the cracks in the Dane’s game widened midway through the third, allowing Vitidsarn the cushion he needed to wrap it up before it got close.

“It’s a big result for me, as I’d lost six times to him,” said Vitidsarn. “I had no pressure. I couldn’t outlast him in the rallies so I attacked a lot more. I tried not to think too much, and kept adapting as the match went on.”

Axelsen, whose last defeat in a final was to Lee Zii Jia at the All England in 2021, was gracious in defeat and complimented the winner.

“It’s only natural, and it’s good to lose sometimes. It makes you stay sharp and keeps you working hard and it motivates you. So adversity is only a good thing and it comes with the job. The last few times against him I came out winner, however today it was different and he deserved the win. I have to keep working hard and hopefully next time I can beat him.

“Overall it wasn’t my best day. I want to congratulate Vitidsarn for the win, he played a great game. My attack and my presence on court wasn’t the best and that’s something I have to do better next time.

“This is competitive badminton. Even though I’ve done well in the last many finals, you cannot expect that I keep winning and winning and winning – that’s not how it works. I try to do my best every time, but unfortunately today wasn’t my time, it was Kunlavut’s time.”

Somewhat in a similar vein was An Se Young’s defeat of world champion Akane Yamaguchi, who fell to her first defeat in a final since the Badminton Asia Championships last May. An Se Young had lost their last four matches, but today her defensive prowess proved too hard for Yamaguchi to breach, and the Japanese was a shadow of herself in the third game, falling 15-21 21-16 21-12.

In the men’s doubles final, Liang Wei Keng/Wang Chang improved their record over world champions Aaron Chia/Soh Wooi Yik to 3-0, rebounding from a dire situation in the third game when they trailed 7-12. The Chinese, winners of the Japan Open 2022 and runners-up in Malaysia last week, held their nerve in a tight finish, 14-21 21-19 21-18.