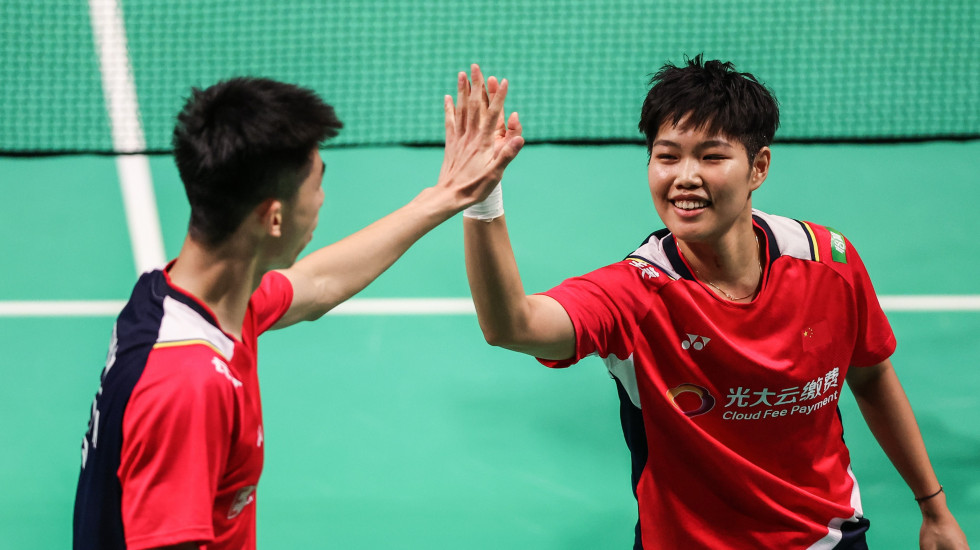 It was supposed to be a leapable hurdle for world No.1s Dechapol Puavaranukroh and Sapsiree Taerattanachai.

“It fills me with pride we were able to defeat such an accomplished pair in our first match together,” said Huang. “They were not familiar with our style so they couldn’t find the solutions they were looking for.”

With her Tokyo 2020 winning partner Wang Yi Lyu recovering from injury, Huang has been pairing Feng in training for the three weeks leading up to the European tournaments.

“We are still trying to figure out the best style for us but I feel comfortable on court with him. We got a big result but the best is still to come.”

“I was overcome by excitement. I played without pressure so I enjoyed the victory more,” he said of his celebration.

A visibly upset Taerattanachai promised to not let the result repeat itself at YONEX French Open 2022, where the world No.1s again face Huang and Feng.

Another top pair to bite the dust were Indonesian third seeds Mohammad Ahsan and Hendra Setiawan, who lost for the first time in six meetings with Lu Ching Yao/Yang Po Han.

Lu said accepting they have not been good enough in the five defeats helped with their focus in the 21-19 21-17 win.

“We thought ‘5-0 down, so what?’. We played freely and were able to concentrate,” he said.

Yang added: “This is the most tactic-focused we’ve been against them. Previously, we made good starts but lost our way as the matches went on. This time, we made sure not to rush the starts.”

Lu concluded: “They also made uncharacteristic mistakes. It all came together perfectly for us.”