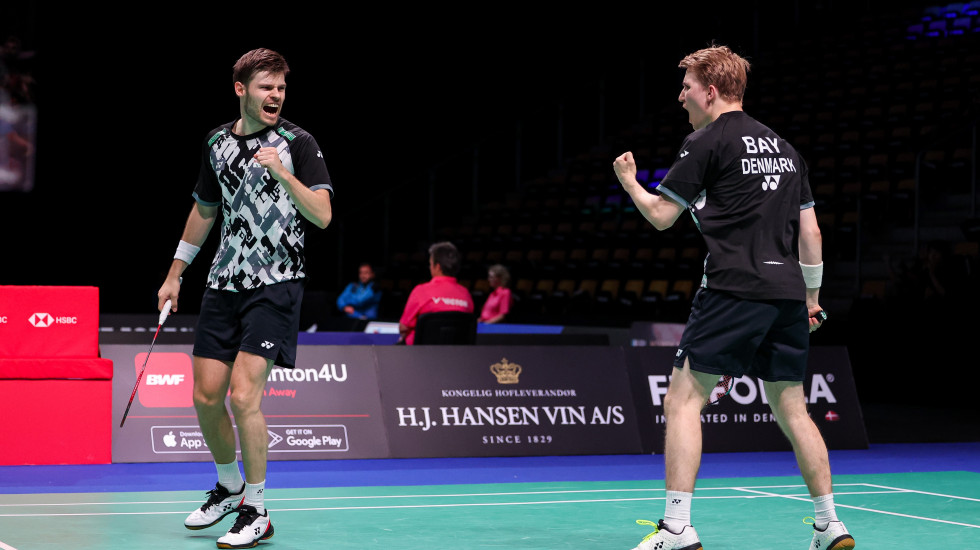 Mølhede and Bay celebrating their win.

Since the beginning of the year, Jeppe Bay and Lasse MØlhede have tried without success to defeat some of the world’s elite men’s pairs.

Having lost to the likes of Fajar Alfian/Muhammad Rian Ardianto, Olympic champions Lee Yang/Wang Chi-lin, Mohammad Ahsan/Hendra Setiawan and Satwiksairaj Rankireddy/Chirag Shetty, the world No.23 Danes finally struck it lucky in the Denmark Open 2022 opening round.

“Absolutely our biggest win so far,” exclaimed Mølhede, who turns 29 next week, post-match. “When you beat the world No.1 pair, it goes straight to the top of our achievements. Doing it on home soil as well, it’s amazing.

“Beating them didn’t cross our minds when we put our socks on this morning. We’ve played many world class pairs and went close a few times. It’s good we could get over the line.”

The 25-year-old Bay, who partnered Mølhede only in 2020, believes a result as massive as this could only be positive for the duo.

He said: “We’ve talked a lot about falling short against the top pairs in close games. Hopefully this is what we need to show ourselves that we can beat the world’s best players.

“We were cool under pressure and kept to the plan all the way. And we talked a lot during the rallies about sticking to our strategy, even if we were behind by three or four points.”

This is Hoki and Kobayashi’s second consecutive first round loss. They were also ousted in two games at their home tournament, Japan Open, in August by Leo Rolly Carnando and Daniel Marthin.

Kobayashi was brutal in self-assessment.

“Too many mistakes,” admitted the Japanese. “We didn’t play well or dictate the rallies. We must get back to the level that made us difficult to beat last year.”