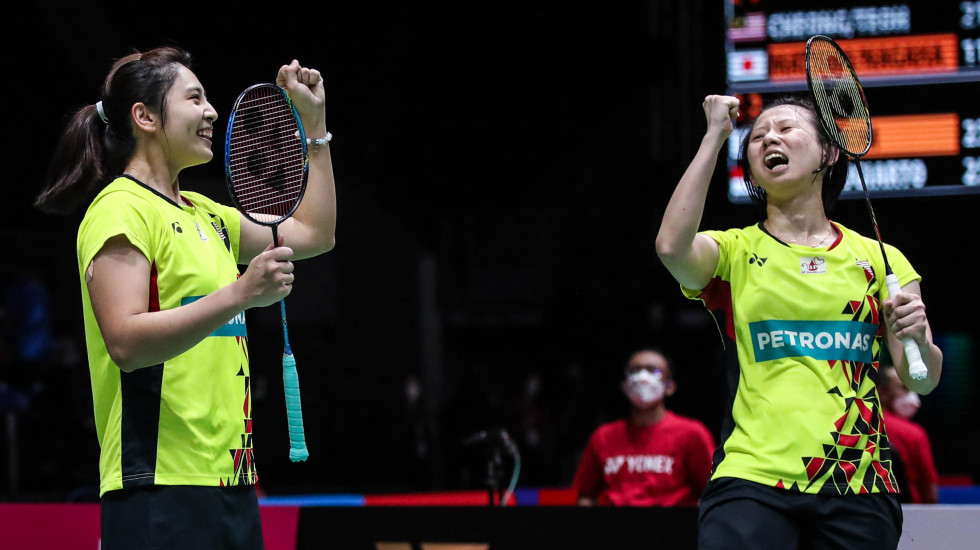 A mental switch helped Malaysia’s Anna Ching Yik Cheong and Teoh Mei Xing catapult to their second big win in two weeks as they made the quarterfinals of the PERODUA Malaysia Masters 2022.

Having lost to two-time world champions Mayu Matsumoto/Wakana Nagahara last week at the PETRONAS Malaysia Open after beating world No.3 Lee So Hee/Shin Seung Chan the previous day, the world No.37 duo resolved to not get affected by points that their opponents won.

“They didn’t play too differently from last time; we were not strong mentally last time when they won their points and got back into the game… this time, when they took one or two points, we didn’t break and focussed on getting back… it was a mental breakthrough and we are happy with that,” said Teoh Mei Xing.

“When we were closing in, my heart was beating fast, the whole thing was unbelievable. After that, when we won, it felt really, really good. We were quite comfortable throughout the match.”

Surprisingly, the world No.6 Japanese were under pressure throughout, troubled, as Matsumoto said later, by the left-right combination and their power. The only phase when they threatened to catch up was midway through the second, when they narrowed a six-point gap to nearly draw level, but the Malaysians shot ahead to close the match 21-11 21-15.

“It was on our minds that they’re two-time world champions. We’re very happy that we could perform well today,” said Anna Ching. “We thought about what went wrong the last time and worked on to see how far we could go against them again.”

It was a good day for the hosts in women’s doubles, with Pearly Tan/Thinaah Muralitharan joining their compatriots in the quarterfinals by beating world No.2 pair Yuki Fukushima/Sayaka Hirota.

“We always had the feeling we could match with them, but they sneaked a way at the end of each game,” said Tabeling. “That also happened in the first game. From the start of the second we hung in there, we didn’t give up, and then you could see them get uncomfortable and struggling with confidence.”

Although the Dutch lost in the first round of the Indonesia Open and the Indonesia Masters, their form was an indicator of better results.

“We only played only one bad match at the start of Indonesia,” said Piek. “Then we played Watanabe and Higashino, that was a very good match as well, we should’ve beaten them. We had a week practice in between with the (Malaysian) national team, so maybe that helped us well to get used to Asian power. What we did well was we could control the shuttle in the drift and in halls like this, when you get confident in the drift, your opponents get even more insecure. We took advantage of that.”