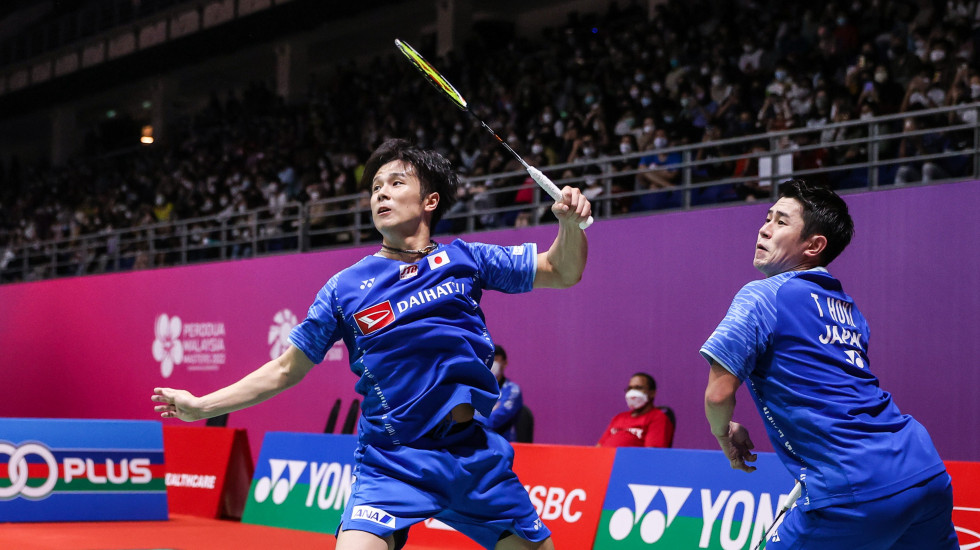 There were other contests that were as competitive: Kim Astrup/Anders Skaarup Rasmussen against Choi Sol Gyu/Kim Won Ho; Aaron Chia/Soh Wooi Yik versus Akira Koga/Taichi Saito, and Fajar Alfian/Muhammad Rian Ardianto against Goh Sze Fei/Nur Izzuddin – who just last Saturday were playing the semifinals of the Malaysia Open.

As expected, the clash between Liu/Ou and Hoki/Kobayashi went down the wire. The Chinese had two match points which the Japanese saved and then celebrated wildly after they pulled off the win at 21-14 22-24 22-20.

“Of course we knew they were tough opponents and had won the Indonesia Open. We thought the first round was like a final. But as we’d won the Malaysia Open on Sunday, there was little time to recover. So I was not really into the match, but Kobayashi tried to calm us down and was patient and that helped,” said Hoki.

“After Sunday’s final, it was difficult to reset our minds. We could turn it around after our opponents were leading, we felt very good about it and that’s why we were celebrating,” added his partner.

Alfian/Ardianto repeated their Malaysia Open result over Goh Sze Fei/Nur Izzuddin, but it was a harder battle this time, with the Indonesians having to stave off a game point.

Among the casualties on the opening day were All England champions Muhammad Shohibul Fikri/Bagas Maulana, beaten in three games by Malaysians Goh V Shem/Low Juan Shen.

“It was not an easy match to be honest but we could sense they were under pressure in the second game so we took advantage to force a decider,” said Goh V Shem. “They looked a bit unsettled at the start of the third game, almost hesitant in their shots and the crowd was behind us so we kept attacking and that combination was a treat. The fans helped a lot, they gave us confidence and kept us awake.”