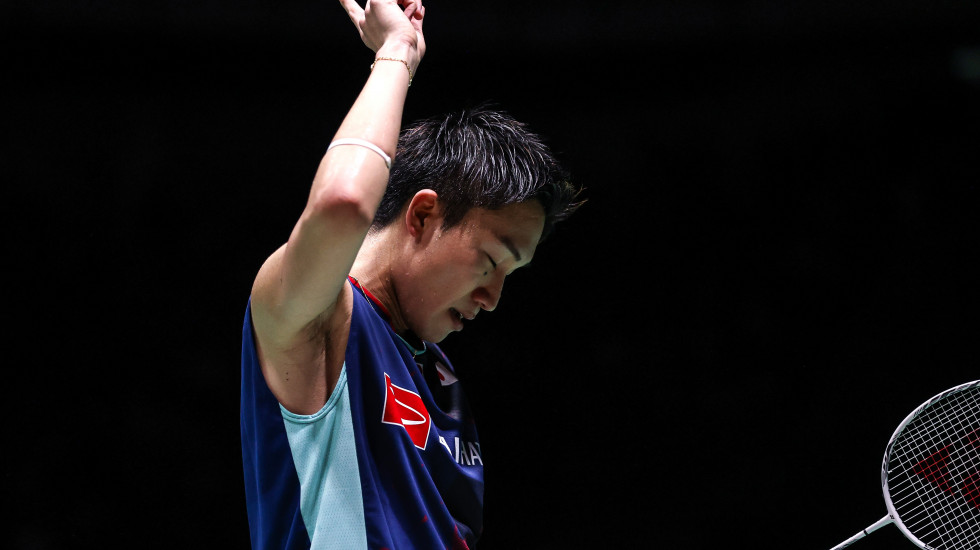 Two and a half years after a momentous event in Malaysia changed the trajectory of Kento Momota’s life and career, the Japanese world No.2 made his way into the PETRONAS Malaysia Open 2022 final.

It was relatively smooth passage, 21-11 21-12 over Kunlavut Vitidsarn, which was only the second completed match he has played all week.

Since his car accident following the Malaysia Masters win of January 2020, Momota has been through much tumult, but his comeback has seen him in two other finals, notably at the Indonesia Masters that he won in November 2021. Yet, the Malaysia Open carries a different significance for him, even suggesting that he was well in sight of finding the “answer” that he sought:

“I’m very happy to be back here after all the difficult times I’ve been through,” said Momota. “For tomorrow, I will try my best for the people supporting me when I was suffering. In today’s match, I had no confidence. I just tried not to make mistakes and just tried to put the shuttle back into my opponent’s court. I don’t really have confidence for tomorrow as well, I will just do my best for the people cheering for me.”

The accident is an inescapable part of his life and Momota recounted what it had done to him:

“I feel I lost everything. I went back to zero. What I established was all gone. Even though I loved badminton, I almost started disliking it. Now I’m in the final and it’s nice for me and I think I might be getting closer to the answer that I was looking for. I think I might be stepping up one level. My condition is the best in recent months. In the final it doesn’t matter who I face. I can’t be too relaxed, nor can I be too tense.”

Vitidsarn had had two long matches in the run-up to the semifinal and the effort told on him.

“My first match (against Zhao Jun Peng) was three games,” said Vitidsarn. “I was quite tired, and quite slow. Kento was controlling well and moving so well. I found it hard to control the shuttle. Still I’m quite happy because I played well in the first three matches.”

On Sunday Momota will face Viktor Axelsen, who made his fifth final this year — and his first at the Malaysia Open — beating Jonatan Christie 21-15 20-22 21-11.

Old demons returned to haunt Tai Tzu Ying as she buried herself under a pile of errors against Chen Yu Fei, falling to the Olympic champion 19-21 21-13 21-15.

Even by her standards, it was an unusually erratic display by the world No.2, who let the match slip after she led by a game and 12-5. Chen won the next 16 of 17 points to take the second game; in the third again Tai could not capitalise on her 9-3 lead.

“When I was leading today I didn’t control the shuttle well, I made a lot of mistakes,” Tai, who hurt herself with a dive in the third game, said. “Hopefully the next week I can recover well. I’m happy with the support I got from the crowd.”

Chen takes on Ratchanok Intanon, against whom she has a 15-2 record.

♦ Zheng Si Wei/Huang Ya Qiong are one win away from their fifth title in a row. The Olympic silver medallists outplayed Mathias Christiansen/Alexandra Boje and take on world champions Dechapol Puavaranukroh/Sapsiree Taerattanachai, against whom they hold a 9-2 record.