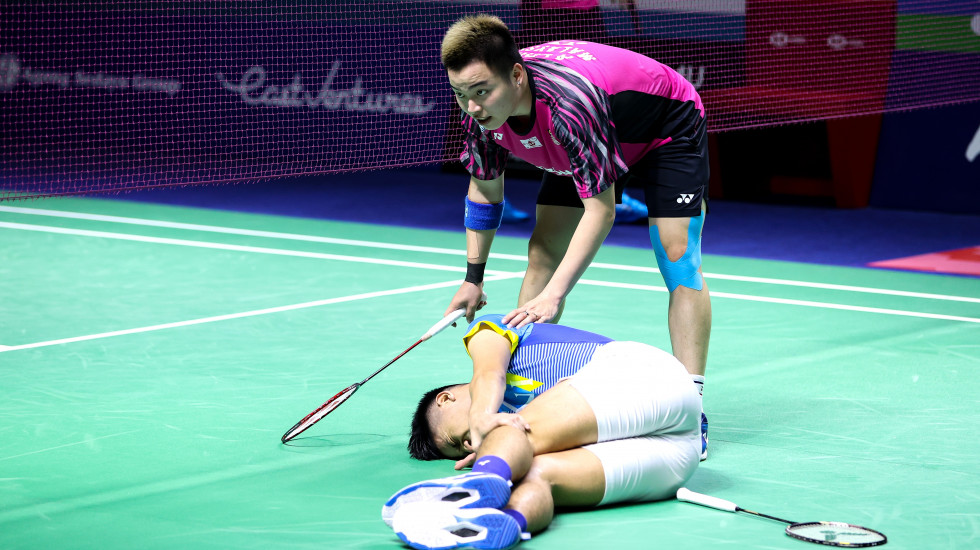 Unfortunate as Yeremia Erich Yoche Yacob Rambitan’s injury on match point was, today’s quarterfinal at the EAST VENTURES Indonesia Open 2022 saw an unusual sporting gesture. Aaron Chia and Soh Wooi Yik, fighting off two more match points against Rambitan and Pramudya Kusumawardana, refused to direct their attack on the immobile Rambitan. Soh, in fact, served twice to the stricken Rambitan but didn’t take advantage of the injury by flicking him.

“That’s not what we want to do,” said Aaron Chia, of the possibility of flick-serving Rambitan, who couldn’t move after injuring his left knee while the Indonesians were 20-17 up in the third game of their quarterfinal. “Although we want to win, we wouldn’t do something like that.”

Until the injury at 20-17, things had gone the way of Rambitan and Kusumawardana against Chia and Soh. At 20-17, defending against the Malaysians’ attack, Rambitan blocked Chia’s smash and moved forward, only to suddenly collapse clutching his left knee.

The doctor was called and Rambitan received treatment, but could barely stand for the remaining points.

Chia said they tried to not let the injury play on their minds.

“On the last few points we tried not to think of his injury, or whether he would retire; we had to keep calm and focus on our own game.

“Honestly, I think today they should’ve won. Unfortunately he got a knee injury, there’s nothing much to say. We felt the game was 99.99 per cent lost. I hope he recovers.”

Once the match was over, with the Malaysians winning 14-21 21-12 22-20, Chia and Soh crossed over to the Indonesians’ side and consoled Rambitan.