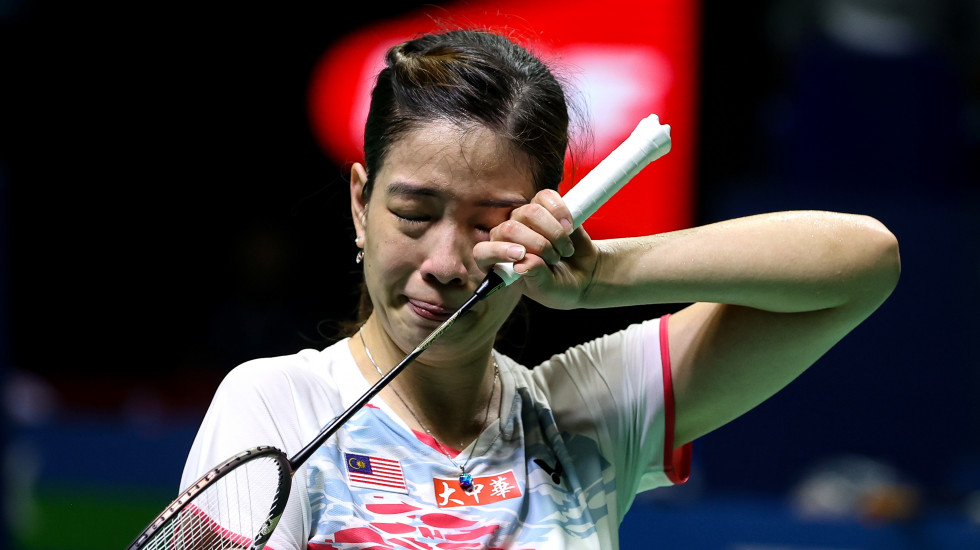 Shevon Lai is all tears after a gritty win.

Goh Soon Huat and Lai Shevon Jemie gritted their way to a first round upset over top seeds Dechapol Puavaranukroh/Sapsiree Taerattanachai, a physically and emotionally draining feat for the Malaysians given that Goh collapsed on the floor a few times as he was still feeling the effects of food poisoning last week.

The Malaysian duo, who are off-court partners as well, have a healthy 6-8 record against the world champions, but today’s win at the EAST VENTURES Indonesia Open 2022 came under difficult circumstances. Goh had had diarrhoea and vomiting last week, and could barely stand on court in between points towards the end of the match.

“The day after he vomited and had diarrhoea, he still had chills and fever, and then chills on and off. He recovered for one or two days and then it came back again. So his body wasn’t 100 per cent back. He started training only a day earlier,” Lai recalled, after the Malaysians had kept their nerve in a tense end game to win 21-18 7-21 22-20.

“Actually, it broke my heart a lot because I know how much it was hurting him. He was shivering throughout the third game. I felt so much pain and I wanted to help him so much, but in doubles it takes two to win. I was really worried for him. And he kept telling me that it’s okay, I want to continue, I want to finish the match. That’s Soon Huat. So I said, I will just support you all the way and you do what you can, I will try to cover as much as I can, within my abilities, and even more than I’ll push over my abilities to cover you. And we will finish this match together.”

The match, said Lai, was the most emotional she had played, for after last week’s loss at the Indonesia Masters, she’d heard comments accusing them of using the food poisoning as an excuse for the defeat.

Tearing up speaking of the tumult she felt, Lai said: “Honestly today, I wanted to prove something as it hit me quite hard. There were some people saying that we made an excuse of food poisoning when we lost, which wasn’t the case, because we have not made any excuse for losing the match in the Indonesian Masters. So… I was very proud of us finishing it without making any excuse, despite Soon Huat being in that condition. So actually, for me today, it’s like, I want to prove this point that we will not use this as an excuse. So I wanted this match so badly.”