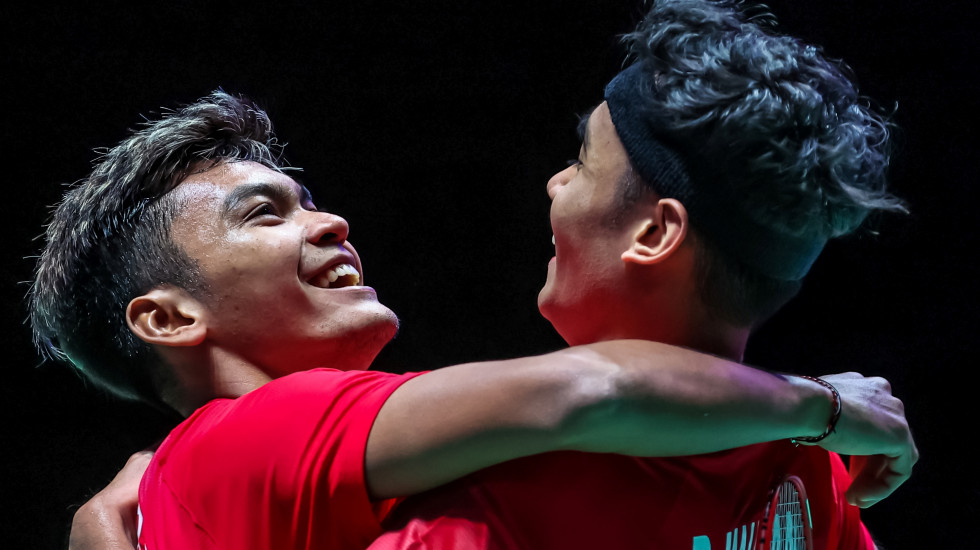 Fikri and Maulana at the All England.

Indonesia’s shot at having all four semifinalists in men’s doubles went awry in the last match, with China’s He Ji Ting/Tan Qiang recovering to beat Leo Rolly Carnando/Daniel Marthin in three games.

Until then it had all gone Indonesia’s way, with Marcus Fernaldi Gideon/Kevin Sanjaya Sukamuljo, Mohammad Ahsan/Hendra Setiawan and Muhammad Shohibul Fikri/Bagas Maulana taking their semifinal spots.

Fikri/Maulana’s was the most exciting of those quarterfinals, with the world No.28 duo edging world champions Takuro Hoki/Yugo Kobayashi 16-21 21-16 22-20 after saving three match points. The challengers shot ahead with five straight points from 17-20 down to make their first semifinal at an event of this level.

“We just kept fighting hard,” said Fikri. “Tomorrow we play the Minions. We practice together, so we know their strengths and weaknesses. We have mixed results during training. We have won some and lost some. We believe we can win.”

Gideon and Sukamuljo were all at sea against Satwiksairaj Rankireddy and Chirag Shetty, with the Indians set the take the opening game. Five game points in hand, the momentum slipped, with the Indians unlucky on a couple of points and the Minions picking up their own level.

The Indians rued their bad luck, and also their decision to push hard on game point instead of sticking to what had worked well for them all game.

“We wanted to close the game and we change our strategy, rather than defending first and creating the opportunity,” said Shetty. “That didn’t go well for us. Then we broke our strings on successive game points. You need a bit of luck to beat them.”