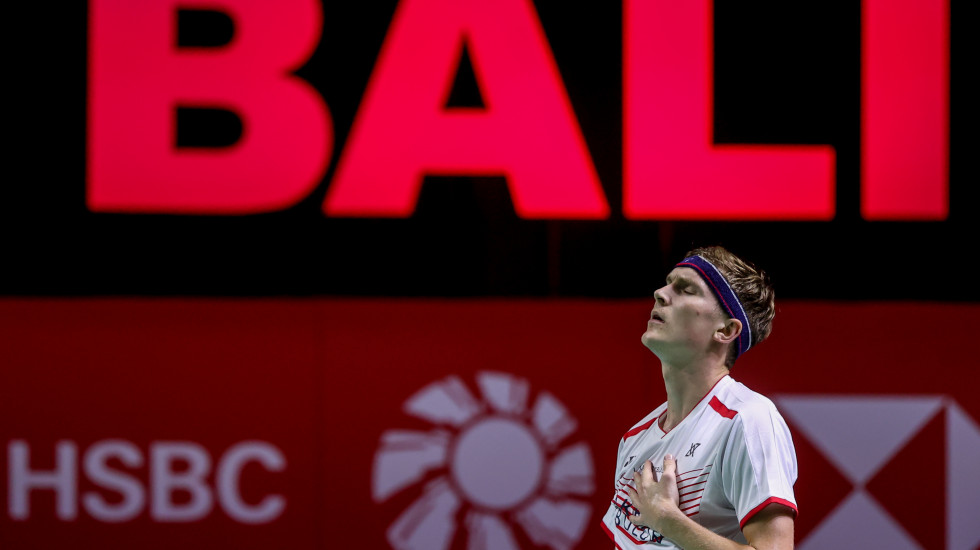 It’s fair to say that Viktor Axelsen has had a spectacular year.

Among the list of incredible accomplishments for the Dane is one unique achievement that has never been attained, and may never be surpassed.

By qualifying for the Indonesia Open 2021 title match, the Olympic champion became the first-ever player to qualify for five HSBC BWF World Tour Super 1000 finals in a calendar year and with four triumphs to boot, the 27-year-old now has the record that could be the envy of many.

“I couldn’t have dreamt of a better year,” Axelsen said upon realising the magnitude of his terrific year following his victory over Loh Kean Yew at the Bali International Convention Centre yesterday.

Having his family join him in Bali has certainly helped him relax between matches.

“To have (fiance) Natalia and (daughter) Vega here to celebrate and when I see Vega not caring if I won or lost, she’s always happy, that’s a big motivation.”

Axelsen kickstarted 2021 by scooping back-to-back Super 1000 titles in January – the YONEX Thailand Open and TOYOTA Thailand Open to close the pandemic-delayed HSBC BWF World Tour 2020 season. Displaying dominant form, he didn’t drop a game on his way to the title in Bangkok. The following week, he was defeated for the first time in 29 matches by compatriot Anders Antonsen in the HSBC BWF World Tour Finals.

The 2017 world champion later returned home from Tokyo with the desired Olympic gold and as only the second European man to do so.

“I was just more relieved than anything else. This was everything I had been working on for my whole career. I was just so relieved,” he said of his Olympic triumph.

An Open title on home turf finally arrived in October, fittingly in the city of his birth Odense, after a sensational and hotly-anticipated final against world No.1 Kento Momota at the VICTOR Denmark Open 2021, which had been upgraded to a Super 1000 event this year.

Then, the Indonesia Open to mark a very special place in the badminton history books. His final duel in Bali was against good friend and the fast-improving Loh, who Axelsen overcame in three games.

“I’m prouder than I usually am. I’m always proud of myself when I win big tournaments. It’s a big win and it took a lot of mental energy,” said Axelsen, whose solitary Super 1000 final defeat came in March to Malaysia’s Lee Zii Jia at the All England Open.

Axelsen is the No.2 seed at the HSBC World Tour Finals 2021 starting this Wednesday.

“I want to enjoy (now) and not think too much about badminton. I’m looking forward to the World Tour Finals. It’s a big mental challenge to set yourself up for another week. There will be tough matches, but that’s what I do, that’s my job.”