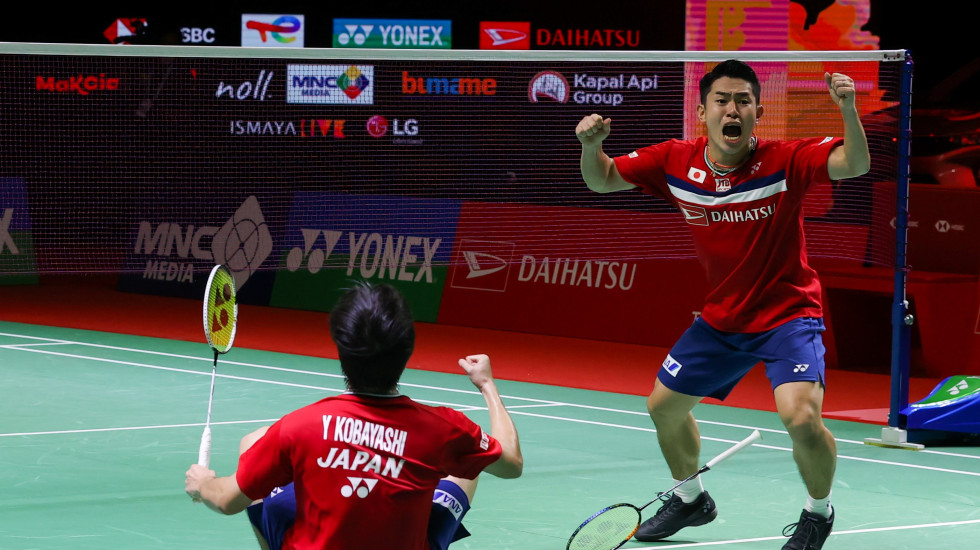 It was ‘gambatte’ for Team Japan as Takuro Hoki and Yugo Kobayashi collected their second HSBC BWF World Tour Super 750 title in as many months and cemented their first-ever win over top seeds Marcus Fernaldi Gideon/Kevin Sanjaya Sukamuljo. Nami Matsuyama/Chiharu Shida then made it a doubles double for Japan claiming their first title in two years.

“We are so happy to win. This a big victory for us,” said an elated Hoki. “To defeat the world No.1 ranked men’s doubles pair really builds on our confidence. We haven’t managed to do it before.”

Hoki/Kobayashi chose the perfect stage to pull off their biggest victory at the expense of the home favourites, as the duo stormed the opening game with attack after attack.

“There wasn’t a strategy, I felt like Marcus and Kevin were tiring out. The shuttles were slow too and we knew we needed to be on the attack. There were some long rallies and perhaps that was to our advantage.”

Under mounting pressure in the decider, the scores levelled with the pressure put back on the Japanese pair.

“At championship point, we were trying not to feel nervous or anything like that. We just wanted to do our best and ensure we played without pressure,” said Hoki.

“It’s important for us to maintain our confidence now and keep the momentum up for the rest of our time in Bali, but this is certainly up there with our biggest achievements.”

Kobayashi added: “We have a strong Indonesian pair in round one next week (Ahsan/Setiawan), but the most important thing is for us is to take this confident into the next tournament.”

Shida said post-match: “We are very happy. This was our goal from the start. We will continue to do our best these next tournaments to continue to get our ranking up.”

Matsuyama added: “We stayed patient today, more than our opponents, and we were able to get the win.”