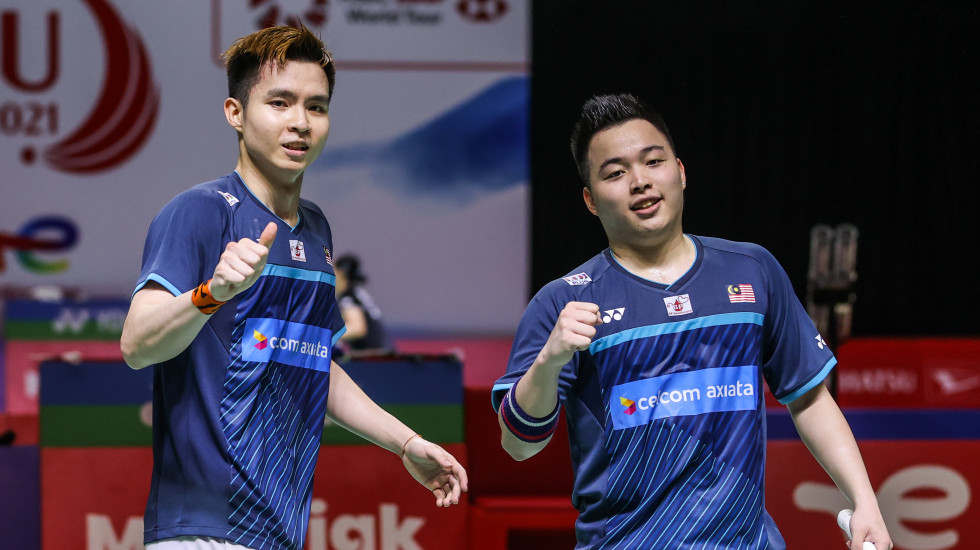 It was arguably their most front-footed display against Lee Yang/Wang Chi-lin and Aaron Chia and Soh Wooi Yik were duly rewarded with a first win in four meetings over the Olympic champions at the DAIHATSU Indonesia Masters 2021 today.

The victory marks a landmark win for the Olympic bronze medallists as their last few encounters against Lee/Wang had not gone Malaysia’s way.

Chia said the victory was a huge uplift to his own confidence.

“We know they are the Olympic gold medallists. We haven’t managed to beat them before. It’s a really good boost for us and also for our upcoming match.”

Maintaining high intensity throughout, the fearless Malaysians believed there was a key to unlocking the tricky pair from Chinese Taipei.

“We chose not to focus on winning,” revealed Soh.

“That’s the reason we have lost to them in the past, and in the semifinals of the YONEX French Open 2021 too. We had back then kept thinking that because we were leading, we were winning, but today we focused on the experience and it was good. It worked,” added the 23-year-old.

“We think the key was putting a lot of pressure on them and leading with that,” concurred 24-year-old Chia.

“We weren’t letting go of any points throughout the match and the shuttles were slow today, too. It felt similar to the shuttles in Finland and Denmark. We got used to it there but we need time to adjust here [in Bali].”

Opting to skip the HYLO Open 2021 to train in Germany, the pair are feeling the burn after a stretch of tournaments in Europe.

“It’s definitely been very tiring and my body is feeling a bit down. We chose to do some training in preparation for the tournaments in Bali.”

They face Takuro Hoki and Yugo Kobayashi in the semifinals after the Japanese pair eliminated Kim Astrup/Anders Skaarup Rasmussen.