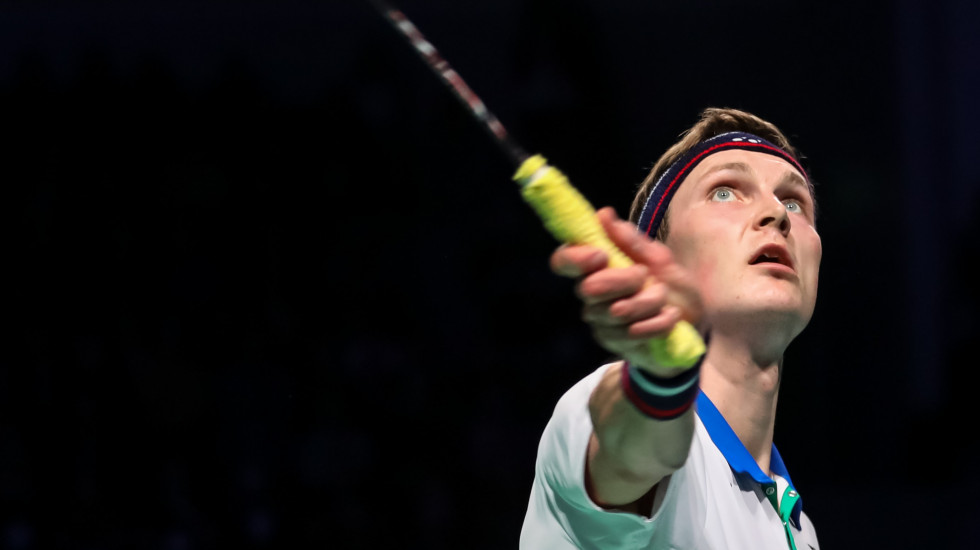 For an extended period on Sunday, the summit ascent of one of the most astonishing comebacks in badminton was in progress.

Kento Momota, 20 months after a car accident nearly derailed his badminton career, and having reproduced his form in fits and starts on his comeback, finally put it all together in an electric display over the first two games against home hero and Olympic champion Viktor Axelsen.

The Dane had mowed down one opponent after another this year with his bludgeoning smash and considerable all-round abilities, but Momota moved with a sixth sense and was always there, in the right place at the right time. Alternately he teased and caressed the shuttle, pinging it into the right spots at just the right pace, rarely giving the big-hitting Axelsen the openings he sought. It was precise, controlled badminton of high quality, each question asked inspiring an equal response from the other end.

With a game up and 17-14 in the second, Momota looked set to continue his reign over Axelsen, over whom he had a 14-1 record.

Oh no, not again, Axelsen thought.

At this point the match turned. Momota’s judgement on the lifts to his backhand corner went awry; the shuttle fell on the line a couple of times, and suddenly Axelsen was back in the match. With the second game in his bag, the Dane persisted with his high pace even as Momota wilted in physical intensity.

Axelsen’s dream year continued with the 20-22 21-18 21-12 result, his fifth title of the season also his first Denmark Open title in the city he grew up in.

“It feels really overwhelming,” Axelsen said. “It’s a combination of being really overwhelmed and really tired. It was a tough one in there today. Obviously Kento is a really strong opponent. It’s good to play him again, it’s been a long time. I’m happy I managed to win.

“The first game was tough physically and mentally. I felt I should have taken it. He played a solid defence and my attack was a bit easy to read. In the second game I was behind and to be honest I was feeling a little bit Oh no, not again… I was having a tough time finding the gaps. But then I started to relax and play at a high pace, and then it worked out and in the third game he struggled a bit physically.

“It was a crazy mental game, quite demanding. It goes up and down in a match like this when you play such a great player.”

Momota, having lost the match, sat in the seat courtside for a long time, staring into the distance. He had been so close to achieving something of great consequence; yet, the level of his play over the first two games was indicative of how far he has come.

“In the second game I felt there was a side wind, but it wasn’t there as much as I imagined, so I misjudged twice and that’s probably why I lost.

“Both of us put out all we had. Emotionally maybe I got pushed back a lot in the third game. It’s always exciting to play him because I get to develop a lot. These days I haven’t been playing very well, but now I feel I was able to free myself from something that was holding me back. So I think it has been a good switch for me.”

Yamaguchi’s final against Korea’s An Seyoung was every bit as enthralling as the men’s singles final that played out later. Yamaguchi’s grim determination in the face of a defensive masterclass from An Seyoung resulted in an epic battle. An Seyoung had match point in the second game before Yamaguchi prevailed; after a titanic struggle to 25-23 that the Japanese won, An Seyoung’s level dropped in the third as a muscle strain in the right thigh started playing up.

For Yamaguchi, it was her first Super 1000 title since the Indonesia Open 2019, and sweet revenge after a rout by her Korean rival at the Uber Cup ten days ago.

“Firstly, to win any game is really nice. Secondly, it’s been a while since I won a tournament so that that also feels nice. I’m very proud of myself that I was able to get the second game. I was able to respond to the cheering from the audience so if I could have given back a little bit with my performance, I’m proud about that too,” said Yamaguchi.

Click here for results of the VICTOR Denmark Open 2021