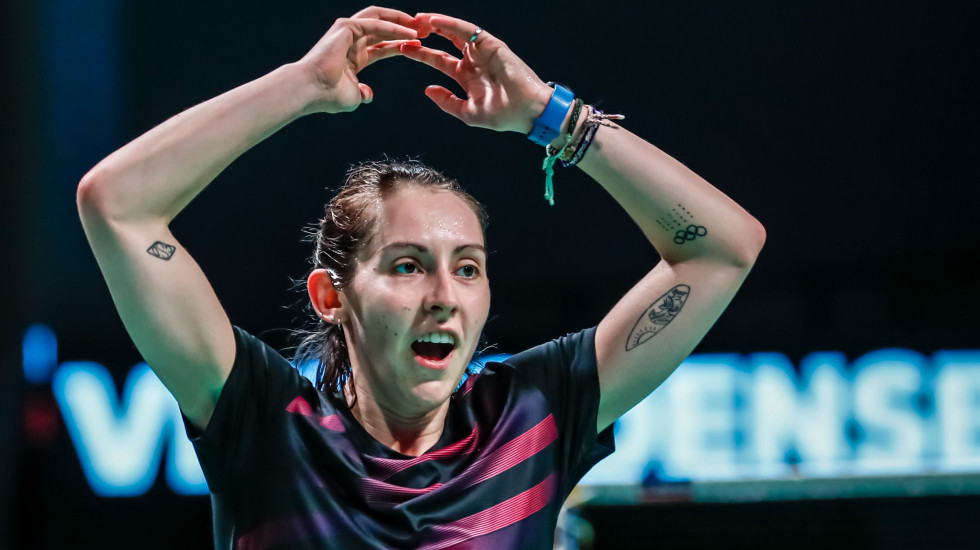 Kirsty Gilmour likes to reference a picture of two little mining men – “one is an inch away from striking gold, and the other one’s packed up and gone home.”

There is little doubt on who she equates with the more resilient miner, the one who does strike gold.

The analogy appears when she talks of how long it has taken her to break into a Super 1000 semifinal for the first time in a longish career.

“I know, if I just make a couple more smart decisions, if I tighten up a couple of shots, that I’m right there, and I think I’ve been right there. It takes all these years coming to these top tournaments, because I can’t necessarily get that level of sparring everybody has.”

Gilmour’s entry into the VICTOR Denmark Open semifinals — her first last-four place in an HSBC BWF World Tour Super 1000 event — came with a look of disbelief as she beat Clara Azurmendi, her second three-game win in two days.

After beating Kim Gaeun in a tense duel on Thursday, 26-24 in the third, it was a more comfortable finish for the Scot today, although she lost the second game after being 13-6 and 18-15 ahead.

She wrapped up the third game at 21-11, threw her racket away, and clutched her head in disbelief. She was in her first semifinal at an event of this level.

“I don’t think this happens often at this level tournament, (it’s always) the same eight to 10 names in the semifinals and quarterfinals. So yeah, I think I’m not gonna lie, it was very nervy for both of us out there.

“There were probably a little bit nerves (in the second game) but Clara is a very aggressive player as well, so absolutely fair play to her, she did step up a little bit and I also had to come up to meet that, so I got off to a good start in the third which I think was the most important thing and just kind of kept that gap from there. I didn’t have to do anything special, just keep doing what I was doing.”

Gilmour credited the resurgence in her form to the work put under coach Ingo Kindervater over the last couple of years. Victory at the SaarLorLux Open last November was validation that she was on the right path. After recovering from a stress fracture in December that took four months to heal, Gilmour made the semifinals of the European Championships in May this year.

“It feels pretty good. You know, we had the European Championships, fighting for bronze there. So, yeah, it’s nice to be able to, you know, step on court and not be worried about little injuries. Just to go on, play my game. Be fearless. And that’s really what I’m trying to do.”

It will be An Seyoung in the semifinals tomorrow, against whom she is 0-2.

“I’ve always loved playing An Seyoung and we’ve played a couple of times right before the whole Covid situation so it will be interesting to see how we match up this time, there were good games last time so at this point there’s nothing to lose. I don’t get the chance to be the true underdog very often but I’ll happily take up that position tomorrow.

“I think her movement is her absolute strength. She just looks like she’s gliding around the court. She makes it look effortless. But I’m going to speak with Ingo and new coach (Jan O) Jorgensen. And see what we can come up with. I’m going to go over my notes from last time, but it’s going to be a good match. I’m really looking forward to it.”