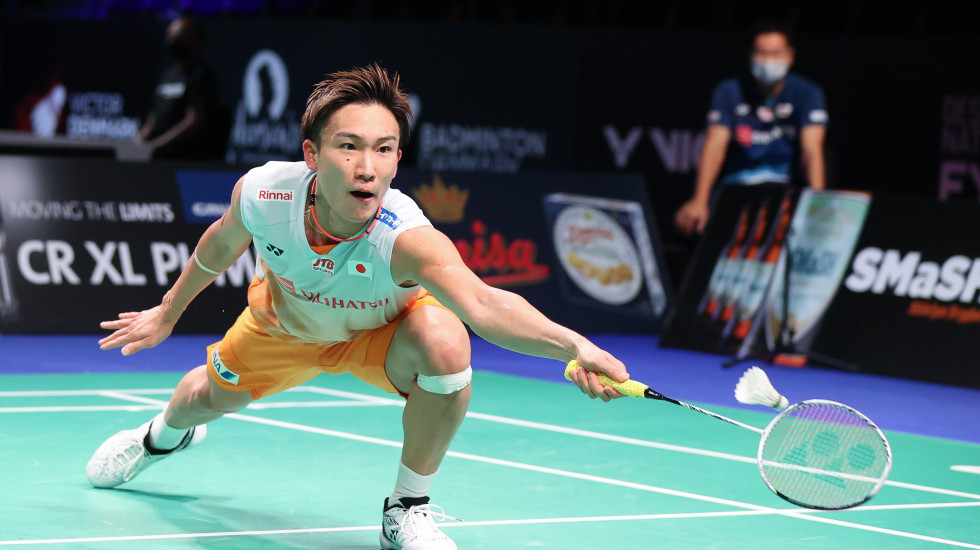 Kento Momota in action on the opening day of the Denmark Open.

The VICTOR Denmark Open 2021, the first HSBC BWF World Tour event since the Spain Masters in May, started in Odense today with the possibility of a Kento Momota versus Viktor Axelsen final clash on the cards.

Since they last met, in the final of the PERODUA Malaysia Masters in January 2020, their career paths took on vastly different trajectories. Axelsen won the All England that year, dominated the Asian Leg in January 2021, and won the Olympic gold. Momota was unlucky to be involved in a car accident, needed surgery for double vision, and had to skip the Asian Leg as he was infected with COVID-19. The Olympics was a low point for him as he crumbled under the weight of expectations. Since then he has had patches of good form in the two major team events – the Sudirman Cup and the Thomas Cup – but has been far from his consistent best.

If they should make the final, it will be interesting to see if Momota can continue his impressive record over Axelsen – it stands at 14-1 in his favour. In recent months Axelsen has been close to unbeatable, but can Momota make the breakthrough?

The top seed won his opening round against Frenchman Toma Junior Popov without much trouble, at 21-12 21-15, but there are other opponents who could trip him before he makes the final. Defending champion Anders Antonsen is in his half and is a likely semifinal opponent.

In a rematch of last year’s final, Antonsen started slowly against compatriot Rasmus Gemke, but was able to close out the match in straight games, 21-16 22-20.

Axelsen is seeded to run into All England champion Lee Zii Jia in the quarterfinals.

Among the prominent casualties on day one were Olympic silver medallists Chen Qing Chen/Jia Yi Fan, who retired in their match against Amalie Magelund/Freja Ravn, with the Danes leading 5-1.

Kunlavut Vitidsarn, who has enjoyed great form in recent weeks, was another casualty as he lost in straight games to Sameer Verma.

Olympic champions Greysia Polii/Apriyani Rahayu and Wang Yi Lyu/Huang Dong Ping made their way into the second round in contrasting styles. The Indonesians were taken to three games by Pearly Tan/Thinaah Muralitharan, while Wang/Huang brushed aside Robin Tabeling/Selena Piek 21-6 21-7.