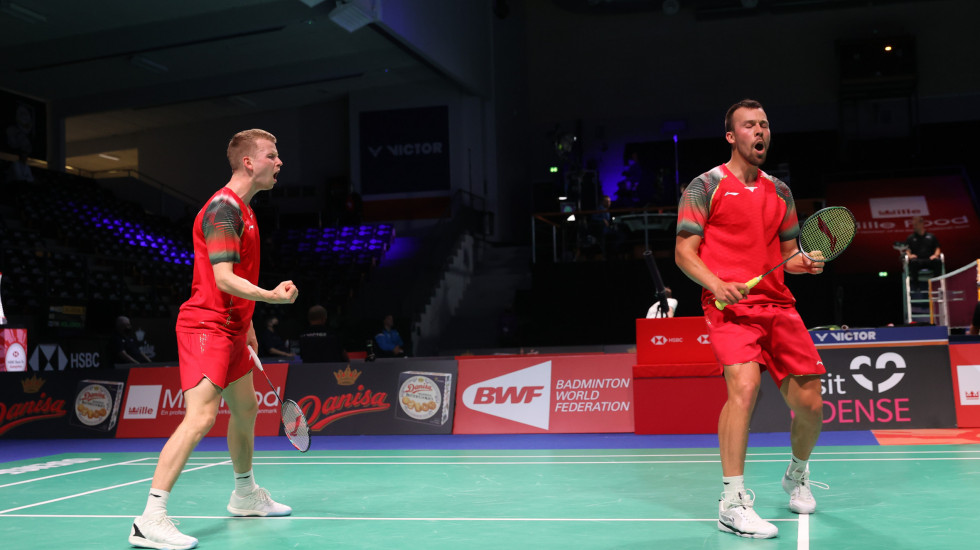 After securing their biggest crown at the YONEX Swiss Open 2021 since the Barcelona Spanish Masters last year, dynamic Danes Kim Astrup and Anders Skaarup Rasmussen are “feeling good” ahead of the YONEX All England Open 2021.

Last Sunday, the duo shook off the disappointments of the Asian Leg and emerged victorious in Basel, outgunning Germany’s Mark Lamsfuss/Marvin Seidel 21-16 21-11 in the final.

“It’s been a long time since we played five matches in a row and all the adrenaline and happiness throughout the week was something special,” said Rasmussen.

Astrup added: “It was an exciting, overwhelming and awesome week.”

Due to the tight COVID-19 restrictions in the Basel sports bubble, celebrations for the world No.13 pair were a little muted following their win.

“We got straight onto the bus to Zurich airport, got a swab test, took the flight home, had another swab test and went straight to bed. We celebrated a lot on court,” chuckled Rasmussen.

After a bumpy journey in Bangkok in January, where they could not clear the first round at both the YONEX Thailand Open and TOYOTA Thailand Open and as a result missed out on the HSBC BWF World Tour Finals, Astrup says the win in Switzerland “was definitely a step in the right direction”.

“We still have a lot of work to do against the very best in the world and when fighting for Olympic medals, but this is an important step,” he said.

“I’d say we are on form,” he said. “It maybe kind of unexpected to win the Swiss Open but after getting things going in the first round, we saw ways to keep getting better.”

Back in Denmark now, the pair are ramping up their preparations for 2021’s first Major in Birmingham next week, where they face compatriots Philip Illum Klindt and Mads ThØgersen in the opening round.

“They don’t play at the National Centre with us. We don’t know them that well but have an idea of how they play and what their skills are,” said Rasmussen.

Astrup added he was “looking forward to playing in the arena” once more.

“It’s an epic place with enormous history. It’s a place we always want to play well in, but never have, so that’s our goal. To play a couple of good matches at least.”

“If everyone saw our matches at Swiss Open, they’d know our level is really high, so once we get going we feel ‘unstoppable’,” said Rasmussen.