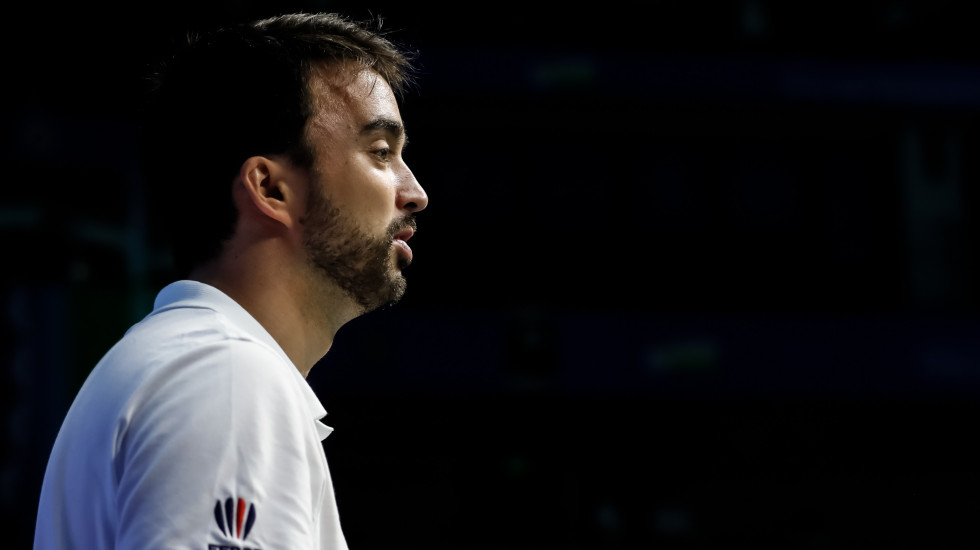 Baptiste Careme: Trying to Individualise as Much as Possible

French badminton has been in the news lately. The French won their first medal – a silver – at the European Mixed Team Championships, showcasing their strength across all five categories. The emergence of a clutch of young players – most prominently, Thom Gicquel and Delphine Delrue — heralds an exciting time for world badminton.

Baptiste Careme, former player and currently doubles coach with the French team, speaks about his approach in guiding his players to impressive performances.

Part 1 of a two-part interview:

Having competed as a player until quite recently, what has been your philosophy as coach?

When I first arrived – because I was a player – I thought that we were the ones to make the first mistake (in a rally). So my first call was to improve in that area, so we did a lot of consistency work on court.

Also, I was thinking that we needed to train more. There’s no more half-days off; we also trained sometimes during weekends. And my philosophy as a coach is that I’m not the kind of guy who says: ‘Badminton should be played like this’. I really think it can be different from one player to another – mentally, physically and technically also. So every time I have a session with a player, I tell him ‘This kind of shot, you can do it in various ways, so just try everything, and pick the technique that suits you the most.’

So of course it takes more time, but it helps the player think about how they want to play badminton, how they feel on court. When you look at the top 10, they’re so different. So everyone needs to try and find what’s the best for himself.

What was the initial experience of working with the players like?

I joined as coach two and a half years ago. It was a lot different for the players in the beginning, but after some time we got to know each other well and it’s working. Of course I’d prefer that it works for every player but I don’t think that’s possible in this world. At least it’s working well for Thom (Gicquel) and Delphine (Delrue) and others too. So everyone’s improving and I hope I’m doing a good job. As soon as I think I cannot give them anything more, I will stop. I don’t want them to waste time. A career in sport can be very short.

My main goal when I arrived was to be able to use all the different skills from the staff in place. They all have a lot of knowledge in different areas and we need to make sure that the environment is place to help them giving everything they have, and also the wish to learn even more. I knew when I arrived that I lacked a lot, especially knowledge in the physical area. That’s why I also needed them to take a big part in this project and help me the best they could, while I could learn at the same time.

What lessons from your time as a player did you carry into your job as coach?

When I stopped playing there was a half-day off on Wednesday afternoons and Friday afternoons, and weekends. So your last training was Friday morning and you’d have to wait for two and a half days, so I was thinking this is not possible. If you want to beat the Asians…. Of course we can’t train as much as the Asians. Some of them do three sessions a day. So we have to try to be more smart, but still train more than we used to. So we stopped these half-day offs and we’re adjusting to every player’s need.

Before, everyone was treated as one person, the approach was the same for everyone. When I was a player, at the end, I was 30 years old, and I was doing the same things that an 18-year-old was doing. So we needed to individualise as much as possible.

You spoke of the ‘Asian way’. In your approach, do you foresee the development of the ‘French way’, so to speak?

(Laughs) Maybe we are trying to. I think it’s hard for us to say that. I had an English coach before, and we had a Danish coach, and we had a French who was Bulgarian. We had a Chinese coach as well. I had the chance to live all these kinds of training, so I tried to pick everything I could from what was good in each of them and make a mix, and it gives you a lot of ideas as well to work with players. As for a French way, we are trying to figure out…

What have you observed about the Asian approach to doubles?

I haven’t visited a lot of Asian countries to see how they train. What I see now is that all the Asian countries are doing hard work on physical preparation. They’re trying to be a bit more Western. They’re using Western physical coaches and stuff like that. They’re really open-minded now. So it’s interesting. But we can do the same as well, taking good stuff from them and putting it into our daily work.

You spoke about getting your players to adapt.

I’m trying to individualise as much as possible. That’s why we need to talk a lot with the players and we need to know each other really well. I need to know how to speak with them, they need to know also what’s working with them, and tell me. In the beginning we were searching a little bit and sometimes I might say something they might not understand, so I need to adapt. After a while we get used to it. I put a lot of focus on the tactical part. I need them to understand what is the game they’re playing. Badminton is not only a game you enjoy playing, it’s a game you use your entire brain to seek the weaknesses of your opponents, and tactically there’s a lot to do.

Coming Up: ‘Thom and Delphine Can be the Best in the World’