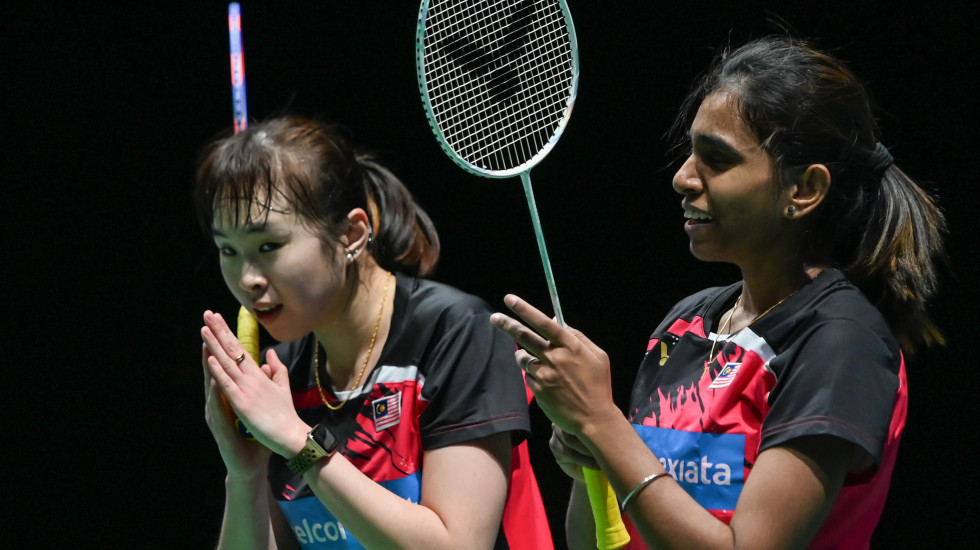 Pearly Tan and Thinaah Muralitharan won the biggest title of their career.

The young Malaysians, who had shown evidence of their potential during the Asian Leg in January, stunned third seeds Stefani Stoeva/Gabriela Stoeva 21-19 21-12 in 42 minutes in their first final of this level.

The Malaysians were the only non-Europeans to pick up a title on finals day.

Having twice fallen in Super 300 finals – at the US Open 2019 and the Barcelona Spain Masters 2020 – Gicquel and Delrue made no mistake this time, prevailing in a tight final over Denmark’s Mathias Christiansen/Alexandra Boje 21-19 21-19. The French duo fought off deficits in both games; they recovered from 16-19 in the first and from 4-11 in the second, to achieve their career’s biggest title.

The much-awaited women’s singles clash between Carolina Marin and Pusarla V Sindhu turned out to be an anti-climactic one, with Marin routing her Indian rival. Marin was too strong for Pusarla on the day, wrapping up the contest 21-12 21-5 in just 35 minutes.

In the men’s singles final, Viktor Axelsen cruised to his fifth title in six straight finals. The Dane took some time in figuring out his opponent Kunlavut Vitidsarn, who put up a feisty show in the early part of the match. The three-time world junior champion led 12-10 with patient play but Axelsen then piled on the pressure and Vitidsarn found it hard to keep up. The Thai did impress with his defence and steady game, but Axelsen quite easily returned his best attacking shots; Vitidsarn had few answers in the second game as he was blown away by the rampant Dane, 21-16 21-6.

Kim Astrup/Anders Skaarup Rasmussen shook off the disappointments of the last few months, capturing their biggest crown since the Barcelona Spain Masters in January 2020.