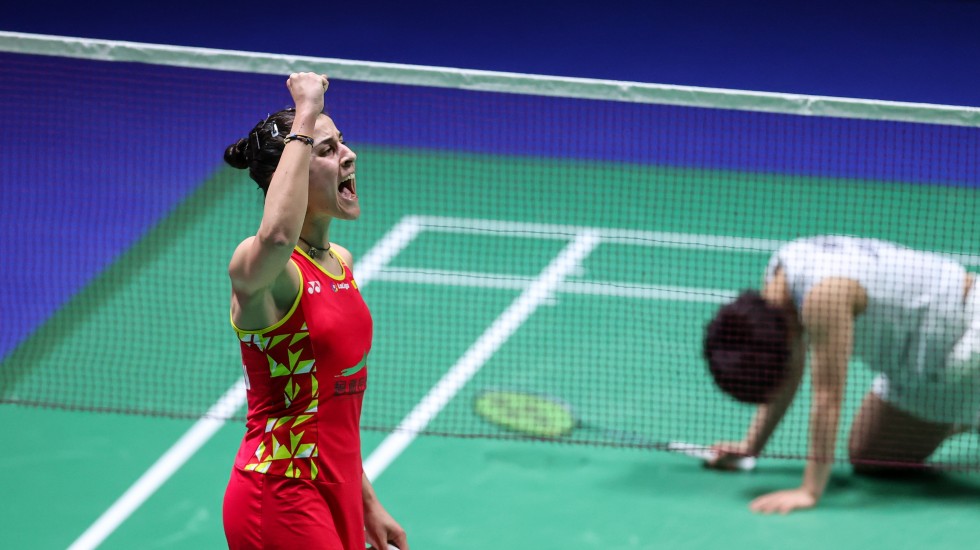 Until the last match of semifinals day at the YONEX All England got underway, Carolina Marin appeared destined to relive her victorious 2015 campaign.

Her second round had seen her dismiss the promising young Chinese, Wang Zhi Yi, in 36 minutes. A day later, she was expected to face a difficult challenge in the quarterfinals against Akane Yamaguchi, but the Japanese wilted in the face of the Spaniard’s speed and power.

Up ahead was Tai Tzu Ying.

Five years ago, Marin had brushed aside Tai Tzu Ying in the semifinals and Saina Nehwal in the final to clinch her biggest title since the 2014 World Championships.

There was the characteristic bustle about the champion this time too, the body language that the badminton world is used to – the fist pumps, the screams, the rushing between points.

Unlike previous times, however, her bustling body language hid the fact that she was going through tough personal times with her father in hospital.

Marin revealed that her father’s illness had affected her during the Barcelona Spain Masters – an event she was expected to win. The Spaniard had unexpectedly fallen in the final to Pornpawee Chochuwong in the run-up to the All England.

“I had a difficult problem, everyone was expecting to watch me win there. I wasn’t feeling really good, but I wanted to play,” Marin said, after her first round win at the All England. “Everyone just says that it’s going to be easy for me to win in Barcelona. But I said we have to go match by match; every opponent is tough and everyone wants to beat me.

“I’m not 100 per cent, I want to keep improving my game and keep focus on strategy. I have to get back, I have a personal situation. My dad is in hospital since a month, he’s really bad, and I have to go back to Spain.”

Going into the quarterfinal, Yamaguchi had a creditable 5-6 record against Marin. The Spaniard was however in her zone at Arena Birmingham this time, and indeed, appeared relaxed as the match progressed, grinning broadly even when she lost the odd point. Her domination had been comprehensive.

“I’m so happy with my performance today, I played so good, I was so focussed on what I had to do against her, from the beginning of the second game. I was enjoying it a lot. I was smiling when I won or when I lost a point. I want to keep going with this spirit,” Marin said; her momentum now apparently unstoppable.

However, Tai Tzu Ying in the semifinals this time turned out to be a different proposition. The two-time champion expertly controlled the rallies to leave Marin short of answers. Still, Marin’s ability to shut off a personal crisis to achieve a creditable semifinal finish at the All England deserves to be remembered.

Marin, to her credit, admitted she’d been outplayed and offered no excuses.

“I feel really disappointed about what happened… I couldn’t control the shuttle and I got frustrated until the end of the match. She was cleverer than me today and that’s why she won.”

The campaign over, it was time, she said, to return to family.

“I think I played some good games. Yesterday was really good and I was satisfied. But now we just have to get back to Spain. My priorities are to care about myself, and to take care of my dad.”