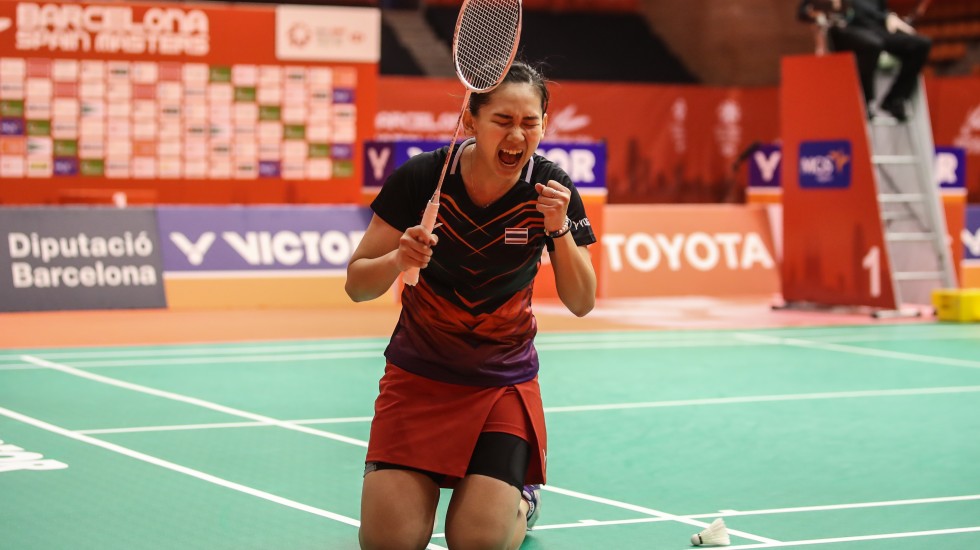 Chochuwong screaming in delight after winning her final.

It was supposed to be Carolina Marin’s first Barcelona Spain Masters 2020 title but Thailand’s young shuttler Pornpawee Chochuwong had other ideas.

The 22-year-old played spoiler to Marin’s dream of lifting the trophy in front of her adoring home fans, having missed the last two editions for different reasons.

Marin looked on course to do that at first, racing through the opening game 21-11.

World No.20 Chochuwong returned more determined to tear up the script in the second game, winning 21-16 to force an intense rubber, which she won 21-18 after being pushed hard by the defending Olympic champion.

It was the sixth seed’s first victory over Marin in six attempts and also her maiden BWF World Tour women’s singles title.

Women’s doubles top seeds Greysia Polii and Apriyani Rahayu followed that up with a 18-21 22-20 21-17 success over Bulgaria’s Stoeva sisters – Gabriela and Stefani – in a match that lasted 96 minutes.

Men’s singles top seed Viktor Axelsen, however, overcame 18-year-old Thai Kunlavut Vitidsarn 21-16 21-13 in a battle between two former world junior champions to retain the crown he won last year and give the European fans something to cheer about.

The world No.4 is already looking ahead to the challenges lying in wait.