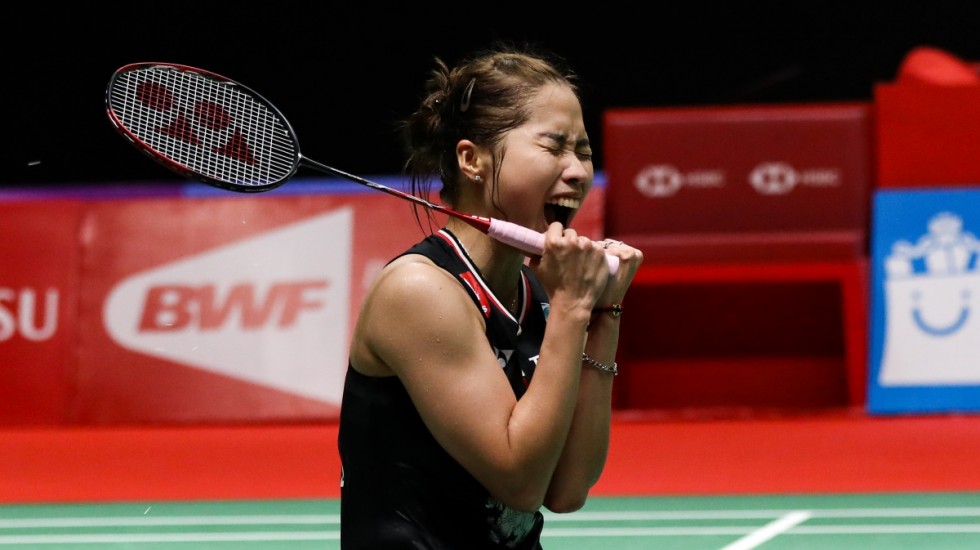 Ratchanok Intanon stopped Carolina Marin from completing a victorious comeback at the DAIHATSU Indonesia Masters 2020 a year after the Spaniard’s horrific injury, but not before the two produced an absorbing final.

Indonesia couldn’t have asked for a better finals day as they finished with three titles, with Anthony Sinisuka Ginting claiming the men’s singles beating defending champion Anders Antonsen, 17-21 21-15 21-9 for his first title since the Victor China Open in September 2018.

The match was an entertaining battle until the second game, after which Antonsen appeared to have difficulty in moving around. The Dane had defended well and was a picture of steadiness in the opening game, but as the match wore on he started to make more mistakes and the Indonesian was on target with his smashes. By the third game, Antonsen was barely able to smash, and Ginting rained smashes past him.

“He was very aggressive in the opening game, but then he got tired,” said Ginting. “I’m very happy as I lost in five finals last year.”

Marin’s determination in capturing the title had been evident all week, for it was here in last year’s final that she suffered an ACL injury that kept her out of the game for several months. The conclusion to the fairytale comeback wasn’t perhaps perfect, but Marin herself wasn’t too disappointed.

“I don’t know if I can feel happy or sad, or be frustrated with myself, because I could not win here, it was one of my goals when I had the injury last year when I talked to my coach,” the Spaniard said. “It’s okay, I just reached the final, I need to learn about that. I think Ratchanok played so well, she was cleverer than me in the net. But well, sometimes it happens, we have to analyse what happened today.”

Marin, true to character, pressured Intanon throughout with her pressing style. She won the second game by a mile, but Intanon gained vital leads displaying great touch at the net. The Thai sent the shuttle tumbling over the tape time and again, leaving Marin with little choice but to lift the shuttle and be vulnerable to the follow-up smash.

Intanon had a healthy 14-8 lead, but Marin was never out of the picture and stayed just a couple of points adrift. It was a day when the Thai could bank on her sublime touch, winning the last two points with her magical wristwork.

Marin could only nod in appreciation at how she’d been outplayed.

“I think she played clever than me today. I had to play a little bit long at the net, not play close, but today she had a good feeling. She took it so many times at the net and passed it back. I need to learn, I have to be clever against her, and also see the conditions. We are attacking players, both of us wanted to take the net. She was better than me today, but let’s see about next time.”

For her part, Intanon said she had tried to stay quick at the last stages.

“On my last changeover, I felt like there was wind behind her, so she would attack, and I couldn’t be slower than her, I had to run every ball down, and do my best, win or lose.

“Carolina Marin is very strong mentally, at important points she gets aggressive. I tried to be myself and tried to enjoy the game. Every player will have pressure, so I had to control myself.”