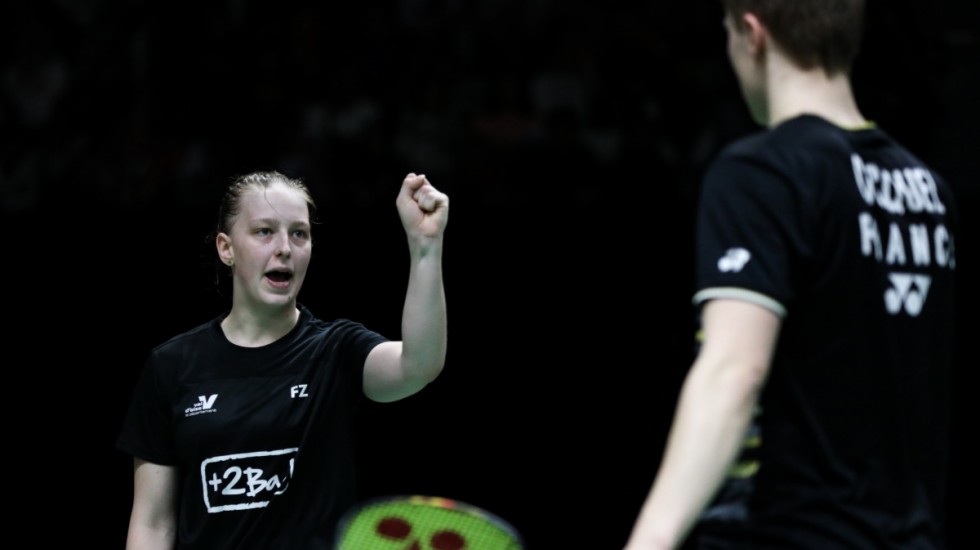 Thom Gicquel (right) and Delphine Delrue gave a good account of their abilities in their first big semifinal.

Thom Gicquel and Delphine Delrue’s memorable run at the DAIHATSU Indonesia Masters 2020 came to an end today in the semifinals at the hands of Wang Yi Lyu and Huang Dong Ping.

The French, who were in their first top-tier semifinal, were defeated in straight games, 21-19 21-16, but it had been a well-contested battle for the most part. They surprised the Chinese with their combativeness and tactics, and had Wang and Huang frequently shaking their heads in dismay, for the speedy Chinese were drawn into their game and couldn’t impose themselves like they usually do.

Gicquel and Delrue had talked of disallowing the Chinese the pace they relish, and through the opening game, they executed their tactics to perfection. It was all soft hands, crosscourt shots, and no lifts. Unable to get into rhythm, both Wang and Huang were left searching for answers.

Delrue had a superb day at the front, anticipating well, keeping a tight shot at the net, and killing the shuttle when the chance came.

The French stayed within touching distance in the first game. The difference boiled down to a few flick serves by Huang Dong Ping that they couldn’t read. With the game tightly poised at 19-18, Huang spotted a vacant corner and earned two game points.

The momentum shifted in the second, although there was one great rally midway through when the French absorbed everything the Chinese threw at them before Delrue fired the winning shot.

The Chinese responded to the tactics of the French by playing a more waiting game; the first few shots were played softer, and the attack turned on only when the opportunity arose. Slowly but surely, the tide turned, and with Gicquel and Delrue struggling to control their lifts, it was comfortable passage for Wang and Huang.

“This wasn’t our best match of the week, for sure,” said Gicquel. “We knew we had to play better than yesterday. It was a good match and they were better than us today.

“There was a lot of wind from one side, it was hard for us to lift, that was the key. It was hard to keep our tactics.”

“They put a lot of pressure on us at the net, so it was hard for us,” said Delrue. “It was amazing to win against two top 5 pairs this week. This was our first Super 500 semifinal, it was amazing, especially as it was in Indonesia.”

Wang and Huang looked unhappy with themselves as they recalled the match. “Our opponents didn’t quite well, their tactics and change in position were well executed. It was quite difficult but we managed to turn it around.”

It will be yet another mixed doubles final between the top two Chinese pairs, for in the other half, world champions Zheng Si Wei and Huang Ya Qiong comfortably repelled the challenge of Malaysia’s Tan Kian Meng/Lai Pei Jing, 21-15 21-15. The top seeds are in line for their third straight title, while Wang and Huang will hope to reverse the tide after losing both their previous finals to their compatriots.