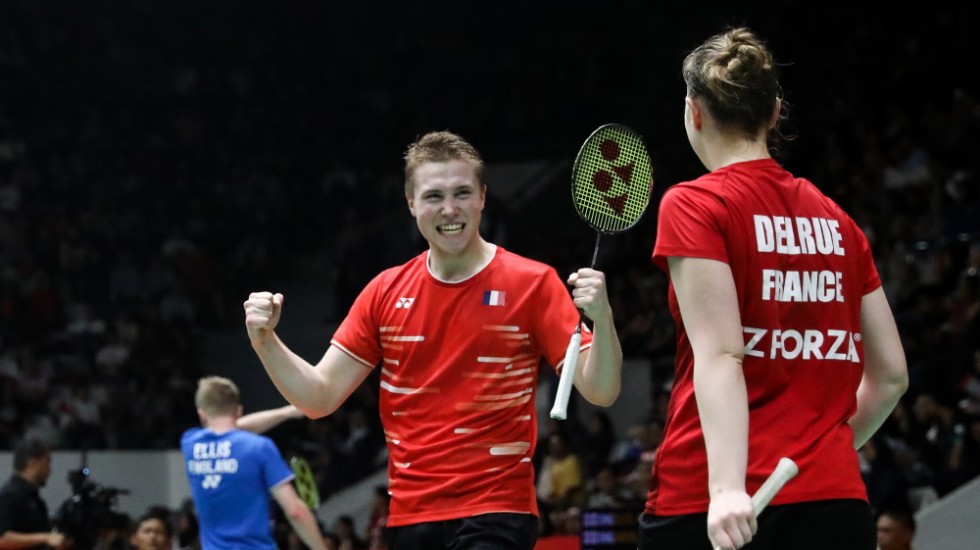 Thom Gicquel and Delphine Delrue caused their second upset in a row.

The 21-19 14-21 21-18 defeat of Jordan and Oktavianti came after the French pair beat Wang Chi-Lin/Cheng Chi Ya in the first round and fourth seeds Dechapol Puavaranukroh/Sapsiree Taerattanachai in the second.

Gicquel and Delrue proved those two results were no fluke and they held their own against the probing questions of the Indonesians. Delrue stood her ground admirably in the front against Oktavianti, while Gicquel posed problems for the Indonesians with his attack from the back. To the Indonesians’ discomfiture, Jordan had a forgettable day, finding the net too often with his smash and drives.

The third game was neck-and-neck, with the packed crowed backing every point by the Indonesians and groaning every time the French won one of their own. Thankfully for Gicquel and Delrue, Jordan sent a backhand drive crashing into the net at 18-all; Oktavianti, who had been steadier all through, lapsed on the last two points.

“It’s a great result for us,” said Gicquel. “The pressure was on them and we could feel it. We had nothing to lose. It’s an incredible feeling. To beat two top five pairs in a row, in front of this crowd, it’s crazy. There was a lot of pressure but we were able to keep the focus and enjoy it.

“We managed to bring them to our game, lot of blocks and midcourt, and played with our abilities. It was harder for them in front of their crowd. For both of us, to play in front of this crowd, it’s the best feeling.”

“I think we played our own game and tried to enjoy the arena and that’s why we could win,” said Delrue.