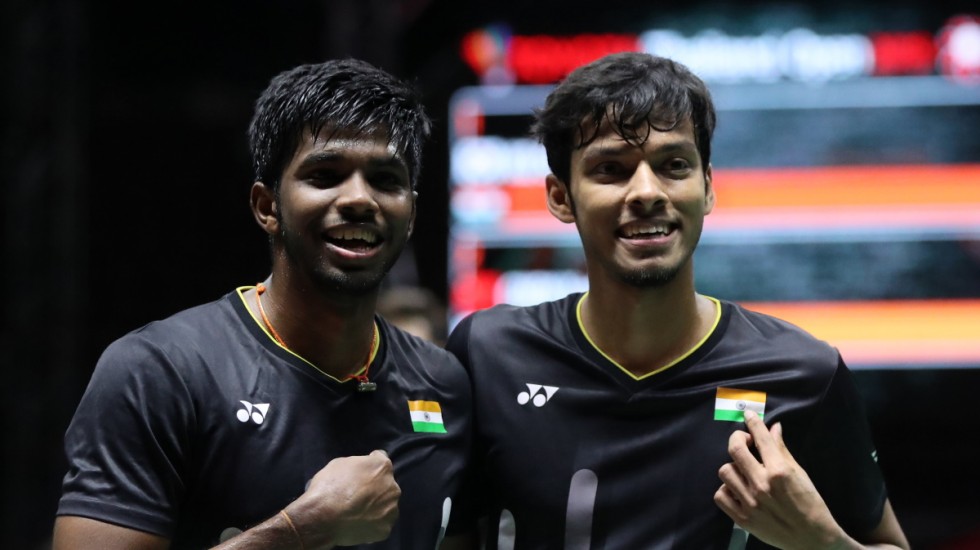 Satwik and Chirag at the Thailand Open, which they won.

They will be up against the wiles and blinding reflexes of Marcus Fernaldi Gideon and Kevin Sanjaya Sukamuljo in the semifinals of the Fuzhou China Open 2019 today, but Chirag Shetty and Satwiksairaj Rankireddy promised they wouldn’t be intimidated.

It was primarily Sukamuljo who they were concerned with, like many other pairs. The outrageous gifts of the ‘Minion’ at the net are part of badminton lore, and Shetty doesn’t want to be overwhelmed.

“Mainly we have to be a lot more patient and not get carried away by Kevin’s antics on court,” said Shetty.

“He catches the shuttle and we get under pressure, but even we can do that now. He will get two-three points but he will give away three-four points as well. So we don’t have to worry about that. If we control that, those emotions, we can beat them.”

Sukamuljo’s anticipation of the shuttle, and his flamboyant interceptions, have tended to rob opposing players of their self-belief. Shetty, who will be up against Sukamuljo at the net, sought to emphasise his own abilities at the front.

“His confidence does affect opponents. Because usually if I’m pushing hard, there’s hardly any pair in the world that can get it back faster than I’ve hit the shuttle. He just swings his racket and it comes back. So he might get that point and subsequently we give it away thinking he might get the next shuttle. He might make mistakes, but we tend to get a bit hesitant.”

The pairs have met seven times; each has gone the way of the Minions. Shetty and Rankireddy can however look back at a few close games, those that went 27-25 or 26-24 to the Minions, or even their last match – the French Open final – where they were level at 17-all in the first before losing their way.

“Hopefully, if we stick to our gameplan and defend well, we can beat them.”

The Indians can take heart from their performances this season. Yesterday they sent China’s best pair, Li Jun Hui and Liu Yu Chen – hurtling to their second successive defeat. The 21-19 21-15 result was achieved with clinical efficiency and cemented the Indians’ reputation as the fastest-rising pair in men’s doubles.

“We didn’t think we’d play this well because we didn’t have time to recover after the French Open,” said Rankireddy. “Our body is still in France, our body isn’t in China. But our physios are taking care of us.

“They (Li and Liu) are tall, and we are also tall, so we know how to play tall players. We are comfortable playing with them. We are more confident now and playing at 100 per cent. Our defence is pretty good; earlier, we used to panic.”

Having achieved in their short careers so far what no other Indian doubles pair has, Rankireddy and Shetty will now aim for the ultimate takedown. The Minions are favourites, but the Indians can throw a few curveballs of their own too.