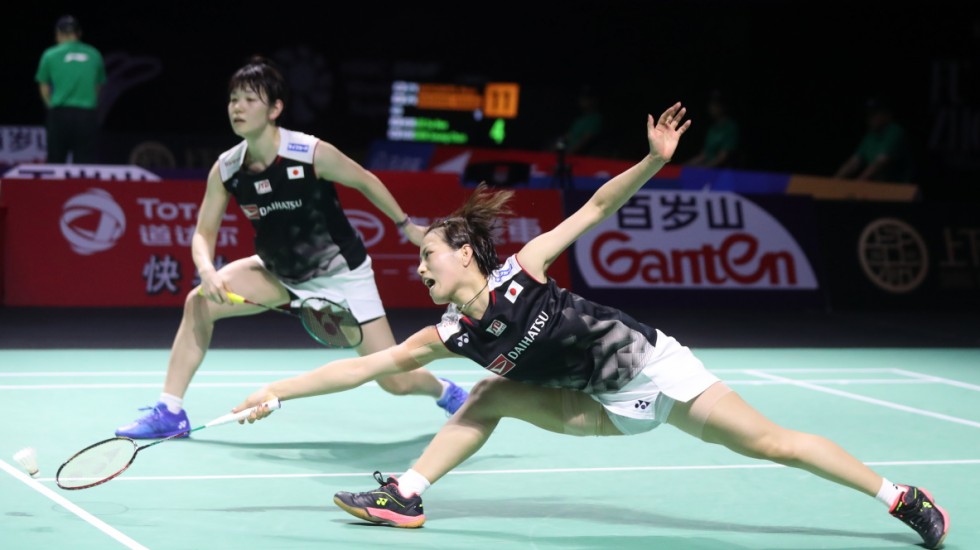 Fukushima and Hirota were pushed every inch of the way.

The rivalry between Yuki Fukushima/Sayaka Hirota and Chen Qing Chen/Jia Yi Fan produced its most enthralling match yet, with the Japanese prevailing in a 94-minute marathon to enter the final of the Fuzhou China Open 2019.

Full of intense rallies, the semifinal saw Fukushima and Hirota twice overcome deficits in the third game to hold off the All England champions, 15-21 21-15 22-20. The two pairs were tied at seven wins apiece before this match, with dominance alternating between the two.

The Japanese take on defending champions Lee So Hee and Shin Seung Chan in tomorrow’s final.

Proceedings on semifinals day followed the form book, with no surprises. Chen Yu Fei extended her title defence into the final day in one of the most exciting matches today. With her opponent Michelle Li seeking to enter her first top-tier final, it was an engaging contest, ending with both players driven to their limits.

Li, moving smoothly and exhibiting her classy range of strokes, was in control through the first game but repeatedly fell into error early in the second. Chen continued to play at a high pace, while Li struggled with her consistency. The Canadian did make a match of it, fighting tooth and nail at the end before the Chinese grabbed the final point.

In men’s doubles, Marcus Fernaldi Gideon and Kevin Sanjaya Sukamuljo’s fairytale season continued as they entered their seventh final this year. The Minions were given much to ponder by Satwiksairaj Rankireddy and Chirag Shetty, but held off the Indians 21-16 22-20.

Next up for them will be Takeshi Kamura/Keigo Sonoda, who stormed past Aaron Chia/Soh Wooi Yik 21-13 21-14.

Another of this season’s dominant players, Kento Momota, entered his 11th final of the year beating Denmark’s Rasmus Gemke. The Dane surprised the top seed with his attacking badminton and was up 18-12, but Momota clawed his way back patiently and then completed the kill at 21-19 21-8.

The mixed doubles final will see Zheng Si Wei/Huang Ya Qiong and Wang Yi Lyu/Huang Dong Ping face off in an all-China battle.

“He (Sukamuljo) keeps spinning his shots, both on the serves and the returns, and that makes it very tough to play. We were forced into making the same mistakes. Our gameplan was good but we weren’t consistent in our quality of strokes.” – Satwiksairaj Rankireddy