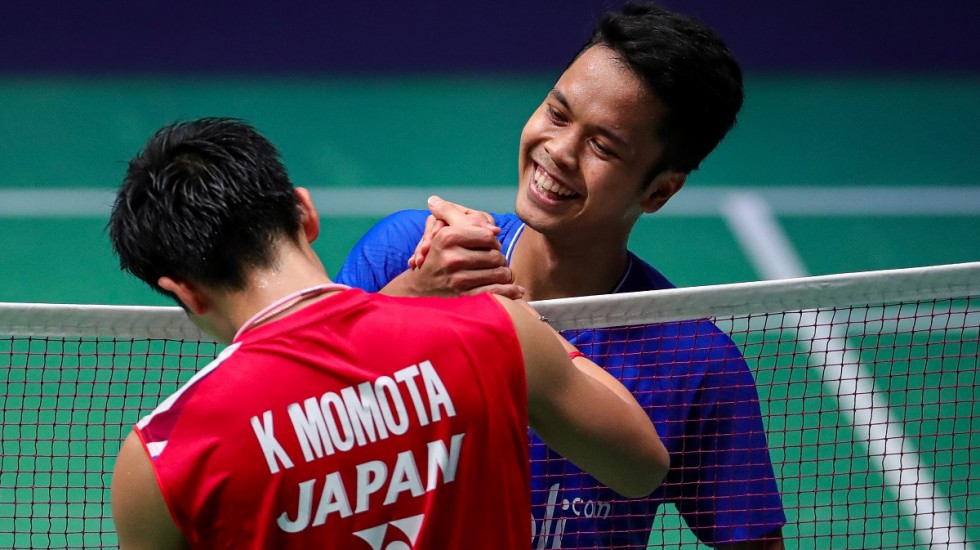 Kento Momota’s incredible 28-match winning streak came to an end at the YONEX French Open 2019, going down in two games at the hands of Indonesia’s Anthony Sinisuka Ginting.

There was a sense of inevitability that this was going to be the match where his run ended.

The world No.1 was coming off two gruelling matches against Wang Tzu Wei and Hans-Kristian Solberg Vittinghus – each lasting well over 70 minutes and requiring supreme efforts to claw his way back after dropping the opener.

Momota himself indicated following his DANISA Denmark Open 2019 win on Sunday that it was becoming harder to maintain his level. “It’s really difficult to keep winning in this very tight schedule,” he said.

The fact today he was up against the one opponent that tends to give him more trouble than any other player was also telling. Last year Ginting was the only men’s singles player to defeat the Japanese star on more than one occasion.

And with the hall playing considerably slower in Paris than compared to last week, you could sense that if the Indonesian could extend the points beyond a minute, the match would be at his mercy.

So it proved with Ginting racing through the first 21-10 and then maintaining his form to hold off Momota’s brave challenge 21-19 in the second.

“I was really tired for today and could not get the speed of the match. I’m disappointed to lose but I gave 100 percent and I’m happy with my effort,” said Momota post-match.

At 17-all in the second, Momota sensed his chance to level the contest. He was beginning to turn the tide and had found it easier to kill the shuttle against an in-form Ginting. However, with it all to play for, one small error cost him dearly.

“I played the point at 17-17 as I wanted to. I thought if I could win that I could win the game. But I missed a crucial shot into the net and that was the end of it.

“I don’t care too much for the record or the meaning of the loss. I learned a lot today and will be back stronger,” he said.

For Ginting, there was a feeling of sheer delight.

“Of course, I’m really happy. I was able to play well today.

“Not only did I win but I carried out the strategy that I wanted to. I planned for it and it’s great that I was able to make it happen.

“Every player wants to win every match, especially when it’s Momota. I now hope Jonatan [Christie] can win over [Anders] Antonsen so maybe we can have an all-Indonesian final,” he said.

Ginting got his wish with sixth seed, Jonatan Christie, defeating Denmark’s Antonsen 17-21 21-19 21-16 in an 81-minute thriller. Christie said following his win: “I was very disappointed in the opening game. Antonsen played well but I made many mistakes.

“I decided to attack more in the second game and that worked for me.

“This is an important win as I need to increase my ranking. I reached the quarterfinals here last year so to get to the semifinals or maybe even the final is great for me.”