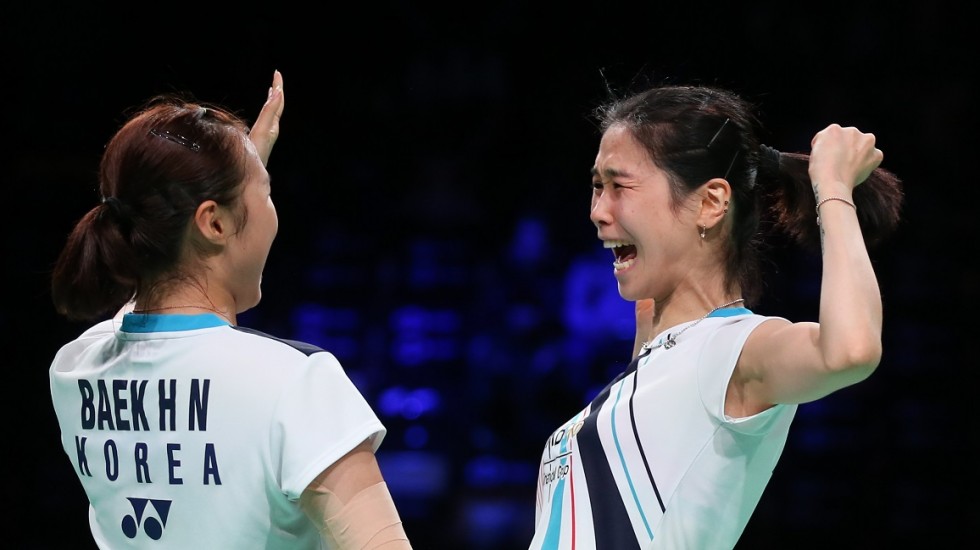 First HSBC BWF World Tour title for Baek and Jung as a pair.

The match was interrupted by two false fire alarms, one of which led to an evacuation of the arena and a delay to the match by 10 minutes.

Baek, playing in clearly the biggest match of her fledgling career, struggled early and the Chinese duo of Chen Qing Chen and Jia Yi Fan took the first 21-9.

Jung, a Rio 2016 Olympic bronze medallist, assumed control from then on and was a noticeable calming influence on her junior partner.

At 5-10 and 10-15 down in the second, they were staring down the barrel of a straight-games loss but Jung raised the intensity and took Baek along for the ride as they won 11 out of the next 15 points to storm back into it.

They carried that ascendency into the third only for a series of bizarre circumstances to unfold. With the score at 7-6, an alarm went off and fans, players, officials, and staff were instructed to evacuate the building.

It was later revealed that it was caused by a popcorn machine positioned in the wrong area with no ventilation.

On resumption of play some 10 minutes later, it was Baek who stepped up her game. Together with Jung, they continued to challenge All England and China Open champions.

From 15-15 apiece they won five straight rallies to give them a host of match points. Remarkably, as Baek was about to serve for the title, the alarm went off again causing groans around the arena.

However, this was promptly called off and the Koreans held their nerve to seal a memorable victory. Jung said afterward: “I’m really happy. Every time I come to Denmark I play well. Now I have two titles here.

“The alarms were a little disturbing of course. But both teams had to deal with it, not just us.

“Following the first alarm though we had time to focus on our play and that was a little helpful.”

Tai Back on Top in Denmark

Not since the Singapore Open in April had Tai tasted success and like on that occasion it was a comfortable victory over Okuhara – 21-19 21-15 the score back then.

The quick conditions were to her liking as she was aggressive from the mid and frontcourt. Okuhara had little answers with her defence, unable to cope with the intensity.

“It has been a journey to get here. All the women’s singles players are very good at the moment and everyone has been improving,” said Tai.

“Every match counts, every title counts and I’m looking forward to continuing this form.

“My condition sometimes changes so I can’t always control my effort and give the same performance, but I just have to keep doing my best.”

It is Okuhara’s fifth runner-up result of 2019. She reflected on her struggles to get over the line this year.

“Tai was very quick with an aggressive attack so I couldn’t defend. Yesterday, I was able to defend well against such aggression but her speedy movement was very tricky today and I couldn’t cope with it,” she said.

“I have been training with an image inside of me of how to win. I had the feeling that I could do it this time. But it was not meant to be. I just have to try again next time,” she said.