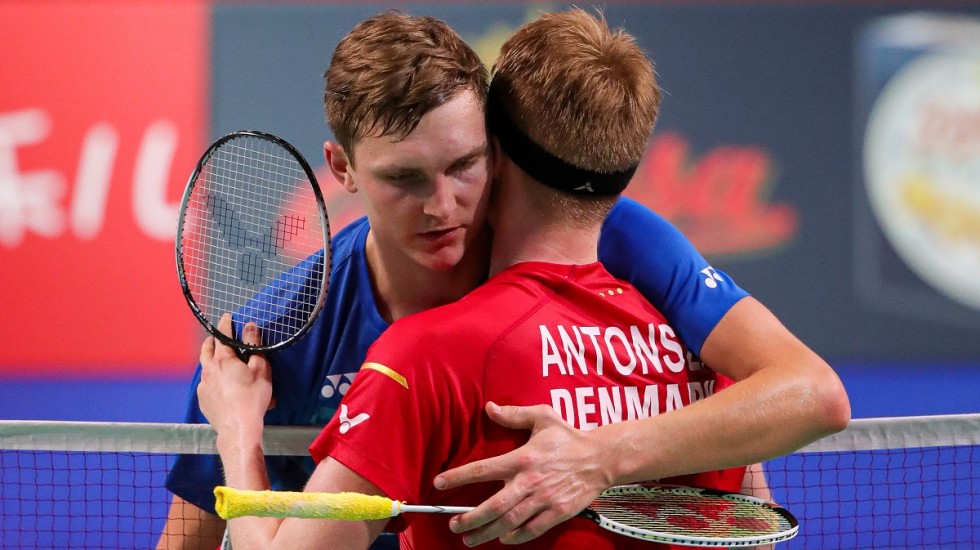 Axelsen came out the better in the clash of the giant Danes.

It was billed as one of the most important matches in recent Danish badminton history. While it wasn’t totally one-sided, Viktor Axelsen certainly came out the better against fourth seed Anders Antonsen.

Two great Danes 🇩🇰 in a great Danish quarterfinal face off.
How epic is this match-up? Which Dane are you backing? 🏸

Playing your friend and teammate must not be easy. Not least in front of a packed home stadium in Odense. It seems to change how you play. Sub-consciously there’s a different mindset. More nerves, more expectations, more uncertainty.

That was perhaps the case for Antonsen in this much-hyped quarterfinal against Odense local Axelsen. Axelsen had been in that position before, many times at the DANISA Denmark Open, and on the Olympic stage. But for Antonsen, the occasion seemed a little overawing.

Although starting the better of the two, Antonsen struggled to grasp any advantage that was presented to him. A string of poor decisions on close line calls gave Axelsen easy points – all of which the 22-year-old Antonsen could have got to.

At the same time, credit must go to Axelsen for his precision and control of the shuttle. He was switched on and used the crowd to his advantage to get the big result. His shots kept finding the line and Antonsen had no answer. The match ended 24-22 21-12.

Axelsen said post-match: “It has been a tough month, tough year for me.

“I’m really happy to not only win but come out playing at this level. I’m really pleased and proud of that and I’m looking forward to another big match tomorrow here at my home tournament.

“The atmosphere is amazing so I want to thank all the fans for coming out. You could hear all the fans cheering. Some for Anders, some for me. It was an amazing experience and one of the biggest experiences for me in my career,” he said.

A disappointed Antonsen was left to rue the result. “It was not the best feeling to lose the first game. I started out well and had a good lead but from there he played great and I didn’t manage to close the first game,” he said.

“I have a feeling that things might have ended differently if I had got that one. Credit to him though for picking up from there.

“With the line calls, maybe I was hoping a little bit too much to get some easy points. But he was playing really close to the lines so credit to him.

“Yes, there was a lot of tension going into a match like this. It was a big occasion and the whole of Denmark was watching. It was fun but of course, I’m a little disappointed I didn’t get the win.”