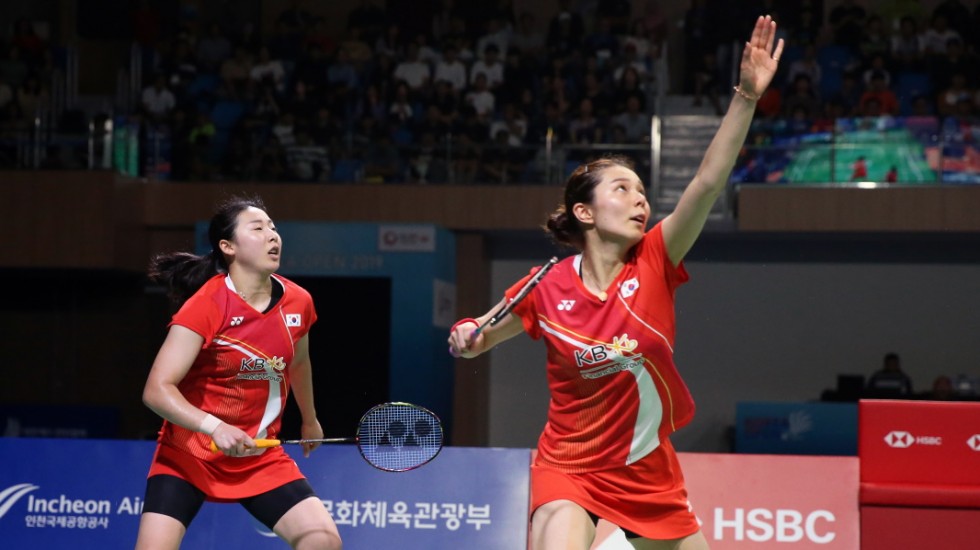 Kim So Yeong and Kong Hee Yong prevailed in a match of fluctuating fortunes to win the Korea Open 2019, outwitting compatriots Lee So Hee and Shin Seung Chan 13-21 21-19 21-17 in the women’s doubles final.

The title was their fourth this year from six finals and won them bragging rights over their higher-ranked teammates.

It required tenacity from the eighth seeds as they trailed all the way in the second game after losing the first. Having overhauled their compatriots late to force a decider, fortunes reversed in the third, and it was Lee and Shin who pulled themselves level at 17-all from a deficit of 7-13.

Sensing blood and closing in for the kill, their eagerness let them down. Shin blew a straightforward kill and Lee overhit a smash on the next shot, destroying their momentum, and giving Kim and Kong enough of a cushion to make it safely home.

“The Korea Open is the biggest tournament held in Korea so we are so glad to win the title here,” said Kim So Yeong. “This may be our fourth title this year but the word ‘champion’ never gets old.  It still makes us so happy to hear it.

“The first game really didn’t turn out the way we’d envisioned it.  We were also losing in the second game, I think because we were being greedy for points so I told Hee Yong we should relax and rethink things and I made a little change to my serve and I think that threw off Seung Chan.”

The Indonesians took their time to get going against Japan’s Takeshi Kamura and Keigo Sonoda, but once they hit their stride, they were a storm that the Japanese couldn’t fend off. Alfian was a brilliant presence at the net, creating the most awkward angles for his opponents, while most of Ardianto’s hammer blows from the deep went unanswered. The Japanese, used to putting up far better defensive displays, just couldn’t get a look-in today. The Indonesians ran away with the match, 21-16 21-17.

“This title is very meaningful for us, because we haven’t stood on the championship podium for a long time,” Fajar said.

“We have to stay focused. The target is to qualify for the World Tour Finals in Guangzhou,” added his partner. Hopefully we will not be satisfied because after this there are still many tournaments we have to go through. After this match, we are not champions anymore, we have to start all over again.”