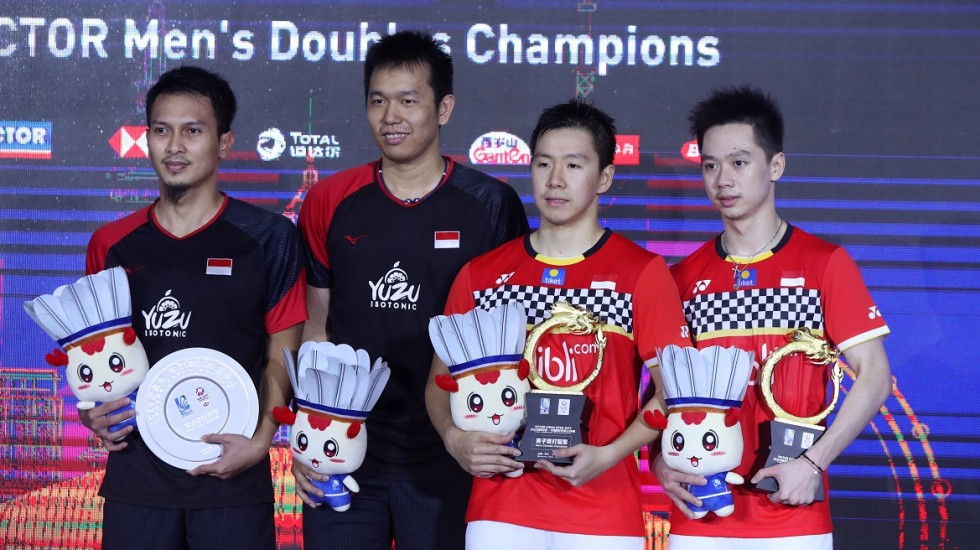 A familiar site in men's doubles this year, but can the 'Daddies' finally get a win over the 'Minions'?

It’s interesting to gain an insight into the mindset of athletes as they ready themselves to take to the court. Equally fascinating is the somewhat phobia-like phenomenon that affects certain players or pairs when they lineup against a particular opponent.

The landscape in men’s doubles is such at the moment that each of the top five ranked duos has a number of foibles against one foe or another. And it’s intriguing to observe the attitude that each partnership takes into a contest knowing they either struggle against or dominate a rival.

In the last eight head-to-head clashes against their countrymen, world No.1s Marcus Fernaldi Gideon and Kevin Sanjaya Sukamuljo have not taken a step wrong against Mohammad Ahsan and Hendra Setiawan.

This year alone they have won final matches against Ahsan and Setiawan at the Indonesia Masters, Indonesia Open, Japan Open and now the recently-concluded China Open in Changzhou. Their winning streak extends back to February 2018.

In fact, Ahsan and Setiawan have not recorded a victory against their teammates since splitting up post-Rio 2016. Yesterday’s effort was the closest they had got in their last four attempts, going down 21-18 17-21 21-15 in 42 minutes. Before that, they had all been straight-games defeats.

But for all their success, the ‘Minions’ too have their weaknesses. Twice now they have struggled considerably against Choi Solgyu and Seo Seung Jae of Korea. They were knocked out in the second round of the World Championships in Basel last month and some would argue they were very lucky not to have experienced the same fate in Changzhou last Thursday.

Those blips on the radar plus other losses at the All England and Malaysia Opens have read for a mixed season by their lofty standards. Still, two Super 1000 victories in a year is no mean feat.

When quizzed on how they feel when they lineup against certain teams, Gideon said: “Sometimes we play well, sometimes we don’t. And the style of play [between pairings] is different. Some we like playing against and others [we don’t].”

Conversely, Ahsan and Setiawan have had little trouble this year against other notable rivals in Li Jun Hui/Liu Yu Chen of China and both Japanese pairs. They are sitting on winning records against all three in 2019. Li and Liu, in particular, seem at odds as to how to break down the ‘Daddies’.

Despite Ahsan at times looking as though he is playing on one leg – an ongoing injury that continues to hamper him – the ‘Daddies’ have enjoyed a renaissance of such winning the All England and the World Championships.

The fact it’s their third title of each – both recorded well into their mid-30s – adds extra weight.

So, what do they have to do to get over the final hurdle and get a win against Gideon and Sukamuljo?

“Keep trying and trying again,” said Ahsan. “We understand them well. We train together all the time. They know us well. But they are the best. They are so much faster.”

It’s hardly a voice of confidence.

Gideon and Sukamuljo approach the season-ending HSBC BWF World Tour Finals as the team to beat. For them, it’s just about controlling what’s within their reach.

“We are focused on every tournament we enter. There’s still so much to achieve.”

Both the ‘Minions’ and the ‘Daddies’ are in action this week at the Korea Open 2019.