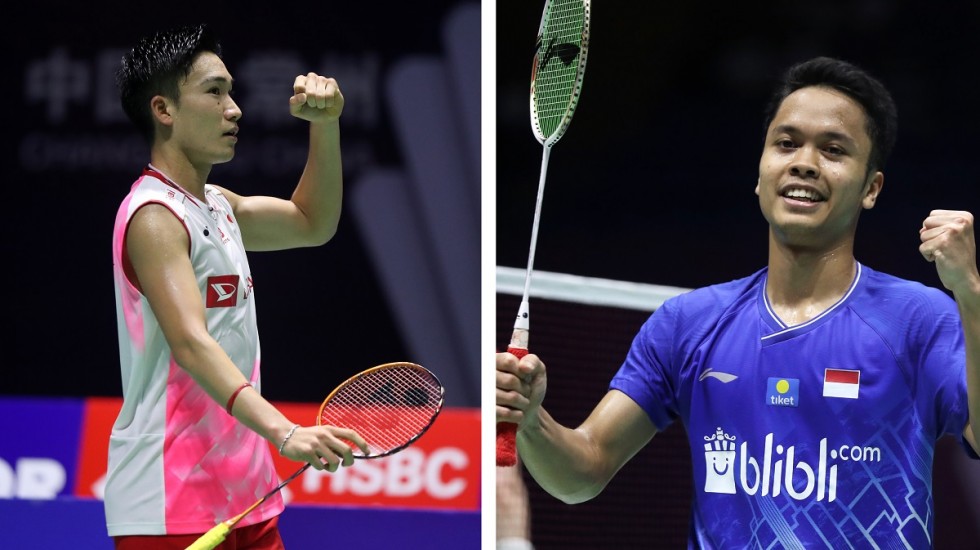 Momota and Ginting set to do battle in Changzhou again.

For a second consecutive year, Kento Momota will fight it out against Anthony Ginting in the men’s singles final at the VICTOR China Open 2019.

Both got through tough semifinals in a session where the draft was a considerable factor.

World champion Kento Momota and four-time China Open winner Chen Long played out an instant classic over 87 minutes in their semifinal in Changzhou on Saturday evening.

It was a near-vintage Chen Long as he moved fluidly at the front of the court and caused constant issues for Momota. At 15-12 up in the decider, it looked like the upset was on the cards, but Momota drew on all his guile to render Chen’s challenge mute.

Both wrestled with the hall’s draft for most of the match, struggling to control the shuttle in the way they intended. It paved the way for an intriguing battle of cat and mouse at the net.

Ultimately though, it was Chen’s series of errors at 15-12 up in the third that was to his demise. His control left him temporarily and caused a lapse in concentration. Momota, like the true champion he is, seized the initiative and took the next six points from 15-16 down to win the match.

Momota said afterward: “Chen Long is a good defensive player and very good in the air, so I had doubts about winning mid-way through the match.

“There was immense pressure because I knew I could not make any unforced errors.”

Rio 2016 Olympic champion Chen looked to be in peak physical condition today – agile, strong and in control. One of the few occasions he has presented in that manner in 2019.

It’s indeed been a busy year for Chen with him and his wife, former player Wang Shixian, welcoming their first son. Yesterday, Chen hinted it had been difficult to balance both badminton and family.

“My performance lately has been average. I can’t say I don’t want to compete. Family and badminton are both important, but for now competition is my first priority,” he said.

Today, Chen felt he just let his focus slip at the wrong time.

“The one thing he did do better than me today was that he was more focused. For example, when he made a few errors due to the windy conditions, it didn’t affect him. But for me, my errors affected my mental game,” he said.

For Momota, it’s another week, another final. He now takes on Indonesia’s Anthony Ginting in tomorrow’s decider as he eyes his seventh title of the year.

“I’m happy to have won today. I hope to continue my fine form and improve my game,” he said.

At this rate, he is the clear heir-apparent to claim Chen’s Olympic crown.

Ginting has made his life tough this week with four straight three-game matches. It seems to be his style though, as he has been able to play the drafty conditions the better and win the crucial points when it matters.

The world No.9 said he was hoping to for a repeat dose tomorrow.

“I’m really thankful to have made the final for the second time,” he said. “Tomorrow will be very tough. I still have to improve and stay focused.

“In the first game, Antonsen played very aggressively. I learned from that and tried to limit his attacking opportunities and that forced him into making errors.”