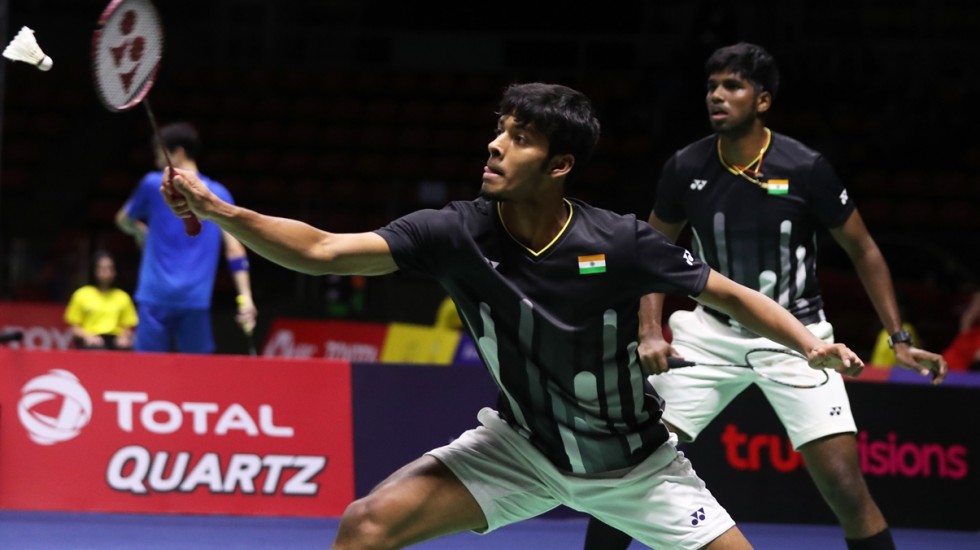 Shetty and Rankireddy rely on calm and confidence to get them through each match.

Lee Zii Jia is the last Malaysian standing, having booked his seat in the semifinals after taking out Shesar Hiren Rhustavito, 11-21 21-14 21-13. Rhustativo’s loss means that Indonesia will no longer be represented at the TOYOTA Thailand Open 2019.

“This is my first semifinal this year so I’ll have to deal with the pressure of that. It’s a pretty even but tough playing field and I think we’re all tired.

“I have to say I’m more comfortable playing against Chou [Tien Chen] because I’ve played him before and understand his game, but I plan to play as I always do whoever I meet next,” said Lee.

India’s men’s doubles Satwiksairaj Rankireddy/Chirag Shetty believe that their calm and confident approach once again worked in their favour as they overcame Korea’s Choi Solgyu/Seo Seung Jae’s with a 21-17 17-21 21-19 win.

Losing the second game meant having to dig deep to step things up but Rankireddy was not deterred by either court conditions or his wellbeing. “I felt the shuttle coming at us much quicker in the second and my shoulder has been giving me some trouble so I was told not to smash too much,” he said.

Having only made it to the quarterfinals of Super 500 events this year, Shetty added: “We feel good going into the semifinals. I think we’ve been playing pretty well these last few days and on a good day, I believe we can beat anyone.”

Indonesia’s Greysia Polii/Apriyani Rahayu were shown the exit by Korea’s Chang Ye Na/Kim Hye Rin in a match that had spectators on the edge of their seats.

Winning with a 21-9 score in the first game, the Indonesians led comfortably in the second to 20-18 but faltered, allowing the Koreans to catch up to deuce and win 23-21.

Ironically, the third game ended in a similar manner as Polii and Rahayu again led to 17-11 but Chang and Kim had by then recognised the Indonesian’s eagerness to finish quickly and they took control, winning 21-19.

Chang said: “We fell behind because we rushed it a bit but then we could see that they were trying to be too cautious and that’s when we calmed down and realised we could get ahead.”

Thai sweetheart Pornpawee Chochuwong earned a standing ovation from her fans when she defeated Cheung Ngan Yi of Hong Kong China, 21-15 15-21 21-12, to set up a semifinal against teammate Ratchanok Intanon.

Seo Seung Jae will also miss out on the mixed doubles as he and partner Chae Yujung succumbed to second seeds, China’s Wang Yi Liu and Huang Dong Ping, 21-19 21-14.

Reigning Thailand Open men’s singles champion Kanta Tsuneyama will get another shot at the title after his 21-18 21-12 win over 2017 champion India’s Sai Praneeth B.