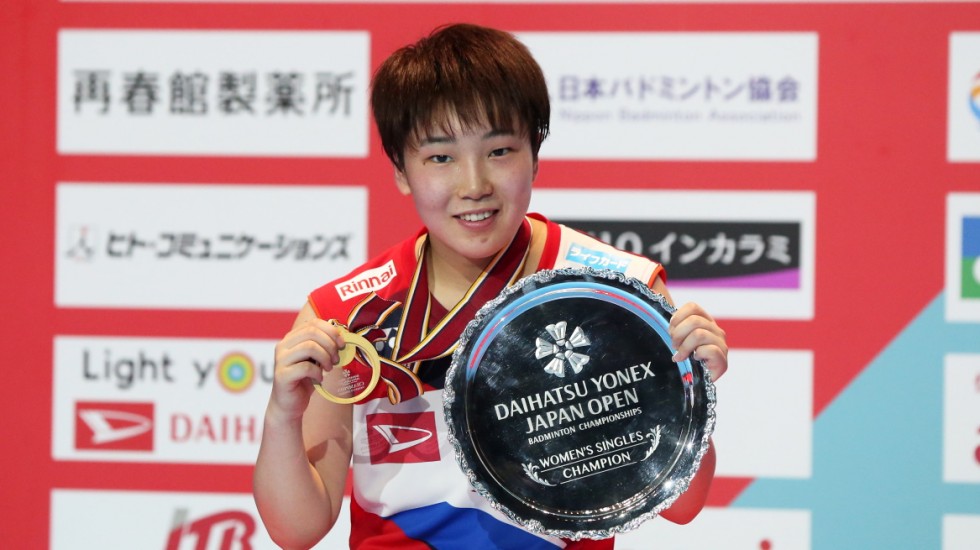 Akane Yamaguchi celebrated her imminent ascension to world No.1 status with her second top-tier World Tour title in two weeks, recapturing the DAIHATSU YONEX Japan Open 2019 that she won six years ago.

Yamaguchi, soon to be confirmed No.1, had too many weapons for compatriot Nozomi Okuhara; the 21-13 21-15 result reversing the verdict of the 2015 final.

And with Kento Momota defending his men’s singles title, it was a day that showcased Japan’s singles supremacy. That would be a good omen for Japanese fans, for the Japan Open is the Test Event for Tokyo 2020.

Okuhara has had the better of Yamaguchi in career meetings, leading 11-7 – including two Japan Open victories. But Yamaguchi has been on a roll, and it was this version that Okuhara was up against today – a tad sharper and more forceful than she has had to contend with in recent times.

Following her semifinal win yesterday, Yamaguchi had talked about Okuhara’s strengths in the rallying game. Today she stood up well to the challenge, unafraid to take on Okuhara on her own terms. Yamaguchi was unhesistant in staying the course while exchanging deep clears; but she also mixed it up with attacking shots, maintaining pinpoint precision. The quality of her retrievals even when she was in trouble was what eventually got to Okuhara, who was unable to create many openings at the net either.

It was a match full of intense rallies, but Yamaguchi gradually pulled ahead; she had made fewer errors than Okuhara, and the judiciousness of her shot-making was close to perfect.

“I was worried I wouldn’t be able to win the long rallies, but I was patient, and whenever there was a chance to make a decisive shot, I was able to make the sharp shots,” said Yamaguchi.

“I wish I could’ve played this well in the Sudirman Cup final. The loss in the final made me learn and helped me improve.”

There was a breezy quality to Kento Momota’s victory over Indonesia’s Jonatan Christie. Nothing that Christie did troubled him; Momota comfortably returned his hardest smashes and eased the shuttle into spots that Christie scampered towards but couldn’t quite reach.

Christie was expected to leverage his explosive game, but in fact it was Momota who surprised the Indonesians with sudden bursts, leaving Christie at a loss for ideas as he went down 21-16 21-13.

“Everyone has studied my game, and sometimes even when I play well, things don’t work out. That’s the difficulty I faced this year. I wasn’t in form, and that made me nervous, coming into the Japan Open. Winning under these conditions is something different from last year. After my loss in Indonesia, I came with the mindset to win in Japan. I haven’t done well at other tournaments, but I was determined not to lose here at my home event,” said the champion, after winning his fifth title of the year.