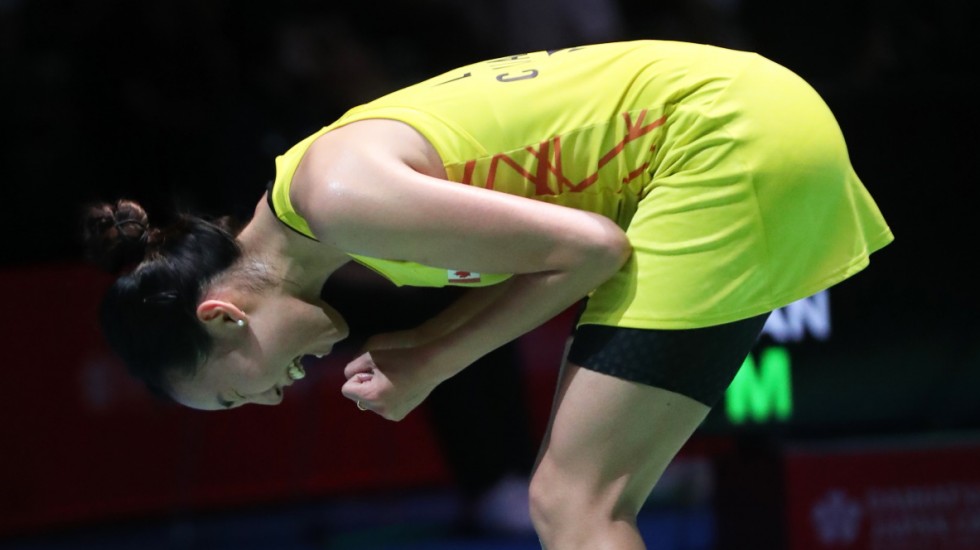 Michelle Li celebrates one of the biggest wins of her career.

Michelle Li revelled in the joy of reaching her first top-tier event semifinal, saying her upset of world No.1 Tai Tzu Ying today “was up there” with her best performances.

“It’s up there, it’s about the same,” Li said, comparing her result today to beating then-World Champion Carolina Marin at the Sudirman Cup in 2015.

“This is my first Super 750 semifinals – it means a lot. I’ve always made the quarters and kind of got stuck. This time I was able to make the semifinals, I’m really happy, it’s a big step for me. I haven’t been in a (top-tier) semifinal before. I can see improvement in my game and have to continue on that. This win will help with my confidence.”

It was a close affair. Tai recovered from a first game loss and eased ahead in the second and third. With a 14-11 lead it looked like the Taiwanese was about to deny her opponent yet again.

Li though stayed stubborn, keeping the rallies going and finding winners through her sharp clips and smashes. Still, when she blew a smash wide for Tai to go match point up at 20-19, she appeared to be on shaky ground. To her credit, she put it behind, equalised with a tight net shot, before converting her first match point after a great rally, in which she athletically countered all of Tai’s wristy trickery: 21-15 15-21 22-20.

Talking of her performance today, Li said the quality of her shots had been better than in their past encounters.

“A lot of the time I used to struggle finding the baseline, it makes my opponent’s offence a lot harder. Today I made sure my shots went to the back and make my opponent move the full court, it makes it easier for me.

“I performed well in the beginning and she took a while to get used to my shots. I’ve been practising the quality of my shots, and today I was able to put a lot of pressure on her and I think she wasn’t expecting that, and that caused a lot of unforced errors in her game and I kind of made sure I worked for each rally.

“It was about staying focused and making sure I played every rally. In the past a lot of my shots gave her the advantage and that made her shots harder to get.”

This is Li’s fourth tournament in a row – and considering that she doesn’t have a travelling physio with her, acknowledged that it was testament to her physical ability. There are more tournaments coming up, in two different continents.

“I have the Pan Am Games coming up, and then the World Championships. It’s a lot of travelling. That I have played four tournaments in a row shows that physically I have been able to keep up.”