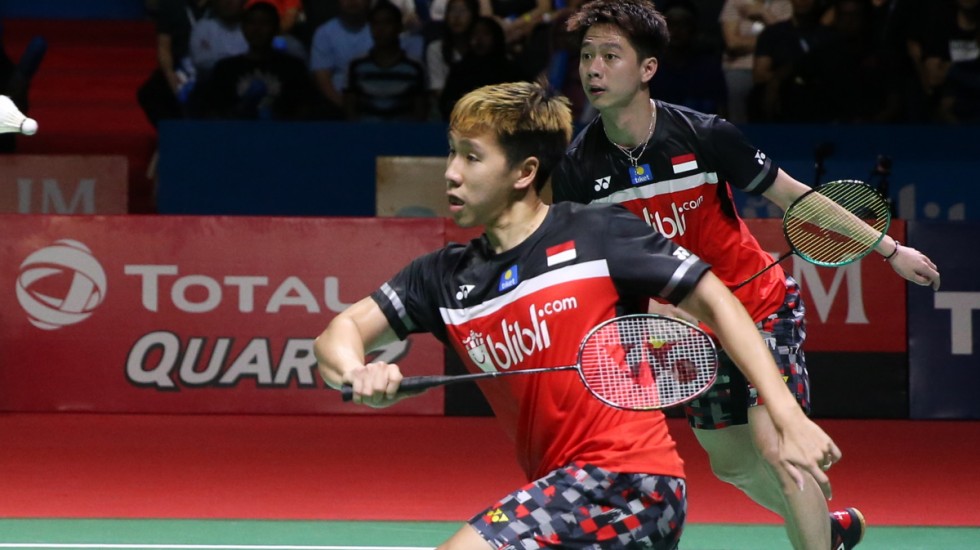 Marcus Fernaldi Gideon (left) and Kevin Sanjaya Sukamuljo were on top of their game today.

It will be the ‘Daddies’ versus the ‘Minions’ at the BLIBLI Indonesia Open 2019 tomorrow – the first time since 2005 that the event is seeing an all-Indonesian men’s doubles final.

Back in 2005, one of the Daddies – Hendra Setiawan – had partnered Markis Kido to victory over Candra Wijaya and Sigit Budiarto. Tomorrow he will once relive an all-Indonesian final, albeit with a different partner and against different opponents.

The contrast between the two semifinal victories couldn’t have been starker. The Minions – Marcus Fernaldi Gideon and Kevin Sanjaya Sukamuljo – were electric on court as they destroyed Li Jun Hui and Liu Yuchen 21-9 21-13 – making barely a mistake in the process.

In contrast, Ahsan and Setiawan nearly made a hash of their semifinal against Japan’s Takuro Hoki/Yugo Kobayashi. The Japanese, bustling with confidence, had established their early dominance with the Indonesians unable to penetrate their defence and making numerous errors up front.

Ahsan and Setiawan did well to recover, falling back on their skills in the drive game to manoeuvre their opponents off position. A lovely caress at the net by Setiawan gave the Indonesians three game points. He blew one by serving into the net – something that would haunt them in the decider.

Ahsan and Setiawan had found their touch, and with a 12-8 lead, had the breathing space they needed. But, much the same way as in their quarterfinal, the Daddies turned raggedy; Setiawan had a horrendous time while serving, sending many of his serves into the net; Ahsan was just as profligate, blowing several winners to the collective groan of the crowd.

“We didn’t serve well and there’s nothing I can say about that,” said Setiawan. “The situation on the court wasn’t good. Luckily, we could overcome that that; there was a lot of pressure and a lot of responsibility.”

“Our opponents played well and didn’t let us off. They pressed in the first game and we had to change the playing pattern; we had to take the initiative and not wait like we did earlier,” added Ahsan.