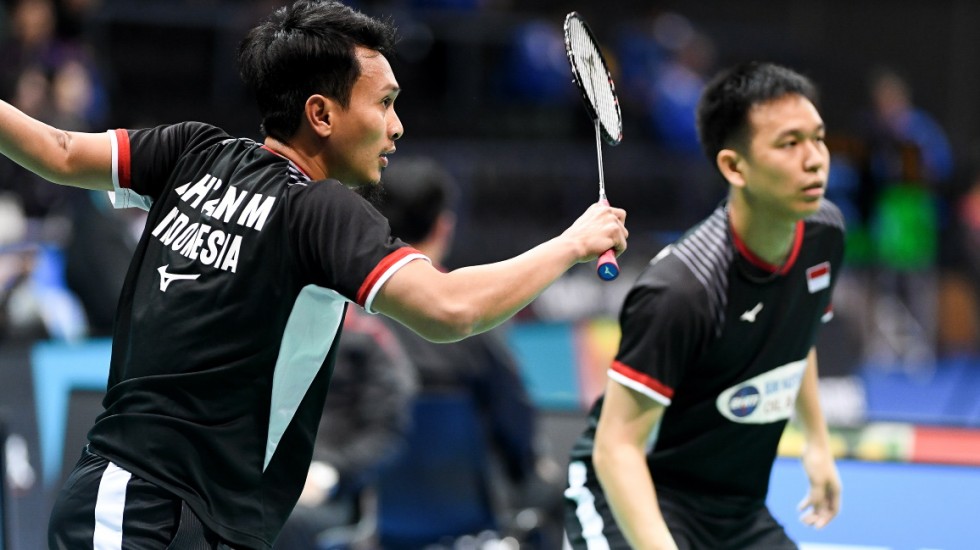 Having fallen to their third straight defeat this year to Mohammad Ahsan and Hendra Setiawan, Mark Lamsfuss and Marvin Seidel were deep in thought at how the No.4 seeds had eluded their grasp yet again.

At their last encounter in Switzerland, the Germans had taken a game off the Indonesians. Yesterday they did well to erase an 8-14 deficit, but Ahsan and Setiawan – called ‘Daddies’ by their fans – again drew upon their considerable range of skills to close it out 21-16 21-17.

“Hendra especially is very good at the net, he’s reading the game well,” said Seidel. “Even when you make the net cord he’s right there and putting it back with high quality. That’s where we struggle a lot, especially when there are good shots we cannot recover from them, but they can, and that’s why it’s three-four points in the end.”

The pressure the Indonesians apply at the outset of every rally is hard to counter, said Lamsfuss: “They’re very good at the serve situations, so sometimes it’s for us the key, and they’re better and we cannot get positives out of it. They’re (also) better in the drive situations, that’s why they’ve now beaten us thrice in a row.

“They’re cool and calm and patient. It’s tough to beat them. We were close in the Swiss Open, but in the end, they always step up.”

The Germans had pulled level with the help of some risk-taking, but the Indonesians quickly wised up.

“I think we did a good few shots there (in the second game), some points there where we took some risks and it worked out. But it doesn’t work always. In the end, I made a few quick steps and they read it a little bit better than before and they made the points. And they have a lot more experience.”

Despite the loss, the Germans are looking forward to the TOTAL BWF World Championships 2019 next month as Basel is just a few hours’ drive away and they are familiar with the conditions.

“The travel will be lesser and that could be an advantage. We know a lot of people there and hopefully they will cheer for us and hopefully there will be a lot of spectators. I’m looking forward and happy to play in Basel,” said Lamsfuss.

“It’s a great arena,” added Seidel. “I love playing there, it fits my style very well, we’re looking forward to it. The Swiss Open is always a great tournament, it’s close by, we only need to drive three hours. We will have family and friends coming to watch us.”

With a new coach – former Chinese Taipei international Chen Wen Hsing having signed up for the role a few months back – Seidel is optimistic about their chances.

“Our new coach has a lot of new inputs. Unfortunately we didn’t have a lot of time to train with her because we are at tournaments all the time, but I think she can give us a lot of great tips and we can try to improve.”