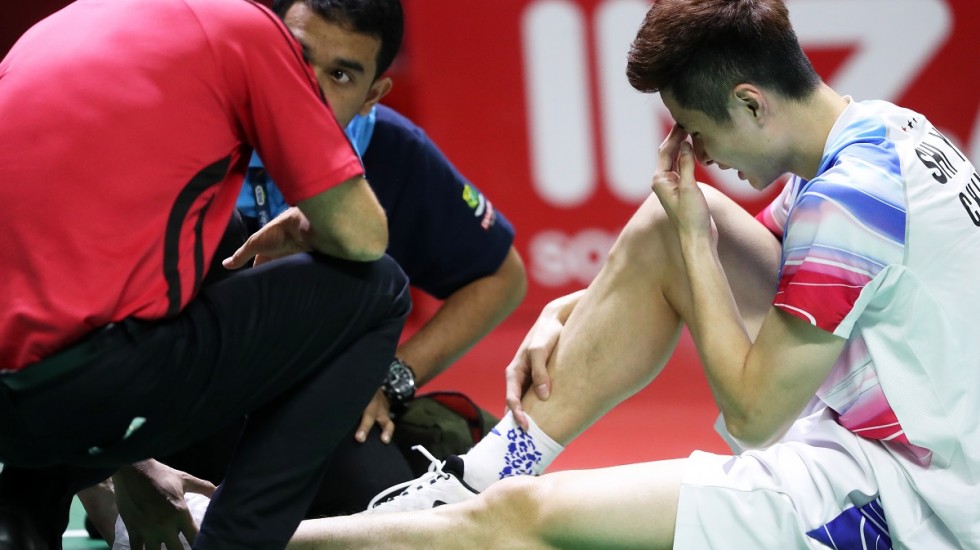 A heartbroken Shi Yu Qi is attended to by the medic and match referee.

The form men’s singles player of the moment Shi Yu Qi has suffered a horrible ankle injury on Day 3 for the BLIBLI Indonesia Open 2019.

Playing his round of 16 encounter against Denmark’s Anders Antonsen on Thursday afternoon, the world No. 2 and tournament second seed rolled heavily on his left ankle as he was approaching the net in just the 14th point of the match.

Shi immediately fell to the ground in agonising pain. The medic was subsequently called to the court and when the 23-year-old finally removed his shoe, the swelling around the left foot was there for all to see.

An unfortunate turn of events for Shi Yu Qi 🇨🇳 as he is forced to pull out in the first game against Anders Antonsen 🇩🇰https://t.co/Hltm3xVRfv #HSBCBWFbadminton #HSBCRaceToGuangzhou #BlibliIndonesiaOpen2019 pic.twitter.com/TuNHzl7NhF

He was forced to retire with the score at 6-7 after just 12 minutes of play and was taken to hospital with a reported severe ankle twist.

The serious nature of the injury now threatens to derail his immediate plans for the TOTAL BWF World Championships 2019 in Basel, Switzerland, in which he was considered by many to be tournament favourite, as well as his ongoing quest to qualify for the Tokyo 2020 Olympic Games.

Within 24 hours he withdrew from the DAIHATSU YONEX Japan Open 2019. On first observation, it seems his place in the draw for Basel is definitely under threat.

Chinese team officials declined to comment further on the incident.

Antonsen said afterwards: “We started out playing well and then he twisted his ankle. It didn’t look good.

“It was really swollen. I feel really sorry for him, to be honest. He’s a phenomenal player and I can only wish him a really speedy recovery. I’m sure he will be back even stronger.”