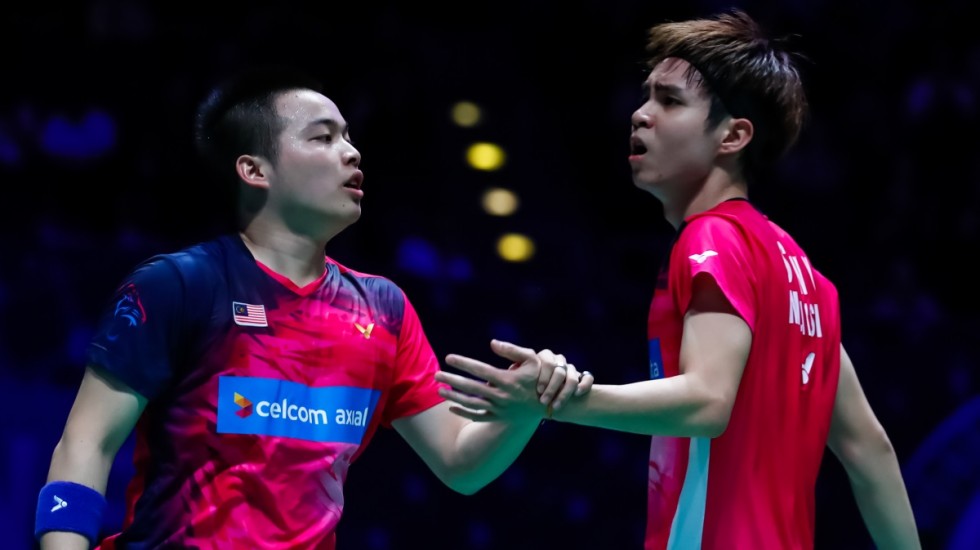 With their stunning run into the Yonex All England final, Aaron Chia and Soh Wooi Yik authored the most sensational story of the championships.

When the tournament began, few would have anticipated that the young Malaysians would be capable of having a tilt at the title.

But Chia and Soh played with fearless abandon and quelled one tough challenge after another. The first to fall were Chinese Taipei’s Lu Ching Yao/Yang Po Han; the next, Denmark’s Kim Astrup/Anders Skaarup Rasmussen.

Former world champions Liu Cheng/Zhang Nan – conquerors of title favourites Marcus Fernaldi Gideon/Kevin Sanjaya Sukamuljo – would have been the favourites against the less-experienced Malaysians, but Chia and Soh showed fine temperament to come through in three games.

The semifinal, against Indonesia’s Muhammad Rian Ardianto/Fajar Alfian – was possibly the match of the tournament. Chia and Soh overcame a first game whipping and kept their heads in a tense end game to clinch the riveting match.

“We met a few world-class combinations along the way to the final, starting from the first round… it taught us how to control our emotions on a big stage like the All England and motivated us to become better,” Soh told the local press on their arrival back home.

The most striking aspect of that victory was the Malaysians’ ability to play high-quality shots  even when the match teetered on the brink – a feature that was also seen in the final against the vast experience of Mohammad Ahsan and Hendra Setiawan.

They had their opponents reeling in the first game before Ahsan and Setiawan were able to impose their terms on the match, eventually winning in three games. But Chia and Soh’s feisty approach – both in defence and attack – had won them new fans, and they will be watched over the next few months.

In any case, it has been a rapid ascent so far for the two youngsters – Soh is 21, Chia 22 – who were with different partners until late 2017. The first hint of their potential came at the World Championships last year, where they made the quarterfinals against eventual champions Li Junhui/Liu Yuchen. A final (SaarLorLux Open) and four quarterfinals (twice in Korea, one each in Chinese Taipei and Vietnam) concluded a promising year.

This season has started well, with a semifinal in Malaysia and a quarterfinal in Germany, before their rollicking week at the All England.

The duo know, however, that their path will get harder from now on.

“Overall, we are happy with our achievement at the All England, but our coach tells us that this is just the beginning and that our main challenge starts in May (in the qualifiers for the 2020 Tokyo Olympics),” Chia said.

“We still have a long road to go… we need to continue working hard in training to raise our performance as well as think long-term in our bid to become the best.”