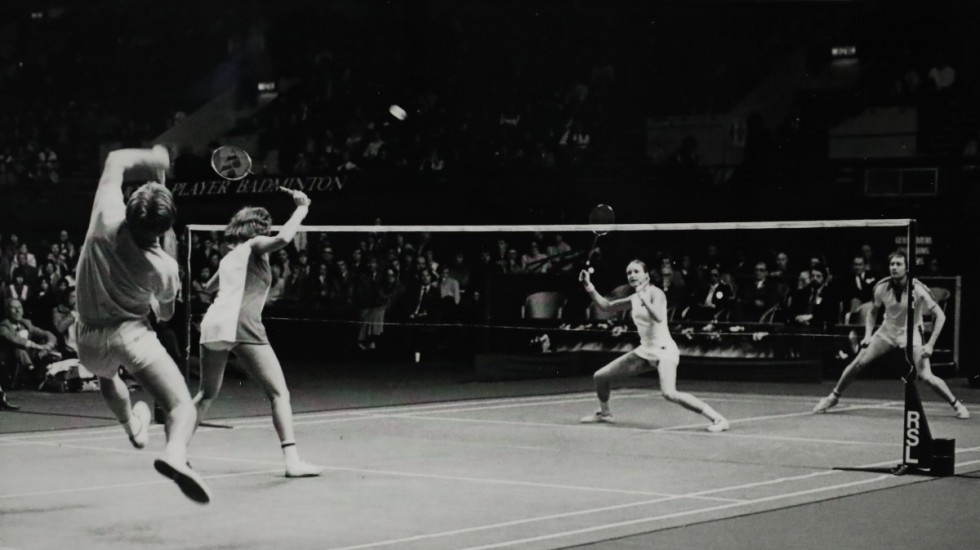 The All England: The Post-War Years

This is the second part of a two-part series on the 121 years of the All England. Read part 1 here.

With the event attracting international players, the 12,000-seater Harringay Arena was chosen for the 1940 All England. But the War put paid to the staging of the event, until it was revived in 1947. Harringay Arena did not last long as the venue, and during 1950-1956 the event was moved to Empress Hall. Building repairs in 1957 forced a shift to Wembley Arena, which was to become synonymous with the All England until the event finally shifted to Birmingham in 1994 following a successful staging of the World Championships the previous year.

The complexion of the game changed dramatically after the War. Denmark – where badminton wasn’t disrupted due to the War unlike in England – dominated the first two editions on resumption. USA — with players like Dave Freeman, Judy Devlin and Margaret Varner, and Malaya – boasting names such as Wong Peng Soon, Ooi Teik Hock, Ong Poh Lim and Eddy and David Choong – were in the spotlight for varying periods of time. Freeman won the All England in his only appearance in 1949, but his compatriot Judy Devlin (Hashman) became one of the game’s legends, dominating the women’s game from the mid-fifties right through the sixties, capturing 17 titles in all.

These players were the flag-bearers of badminton in their countries. USA would win the first three Uber Cup titles, while Malaya (now Malaysia) swept the first three editions of the Thomas Cup.

USA’s dominance of the women’s game was challenged by Japan, who captured five of the six Uber Cup crowns from 1966. This generation of players also made an impact at the All England, with players like Hiroe Yuki, Etsuko Takenaka, Noriko Takagi and others figuring among the winners in singles and doubles from the late 1960s onwards to the late 1970s.

Following a prolonged period of dominance in the 1950s by Malaysia’s Wong Peng Soon and Eddy Choong in men’s singles, the baton passed to Denmark’s Erland Kops, who won seven titles between 1958 and 1967 before his record was broken by his successor, Rudy Hartono.

Hartono and his compatriots like Tjun Tjun/Johan Wahjudi and Christian Hadinata/Ade Chandra cemented Indonesia’s reputation in badminton. Among the notable achievements of the 1970s was Gillian Gilks’ triple crown in 1976 that has not since been emulated.

The 1980s saw the entry of China and Korea into international competition. While Korea’s successes were mainly in doubles, China excelled in all five categories. Beginning with Zhang Ailing (women’s singles), Lin Ying and Wu Dixi (women’s doubles) in 1982, the Chinese consistently produced champions, throwing up a succession of big names, right until the present.

Players like Morten Frost in men’s singles and Susi Susanti in women’s singles, with four titles each, were among the prominent names to challenge Chinese domination.

Indeed, in the 36 years since they began participating at the All England, there have been only four years – 1986, 1993, 1994 and 1995 – when China have not returned with at least one title. Among their landmark achievements was Gao Ling/Huang Sui’s record of six straight women’s doubles crowns between 2001 and 2006.

But it has become increasingly difficult even for China. With the re-emergence of Japan, and a clutch of new powers such as India, Chinese Taipei and Thailand, the landscape in badminton at the All England looks very different from a decade ago – when China swept the board with five titles. In the 121st year of the All England, the venerable tournament continues to reflect contemporary times.