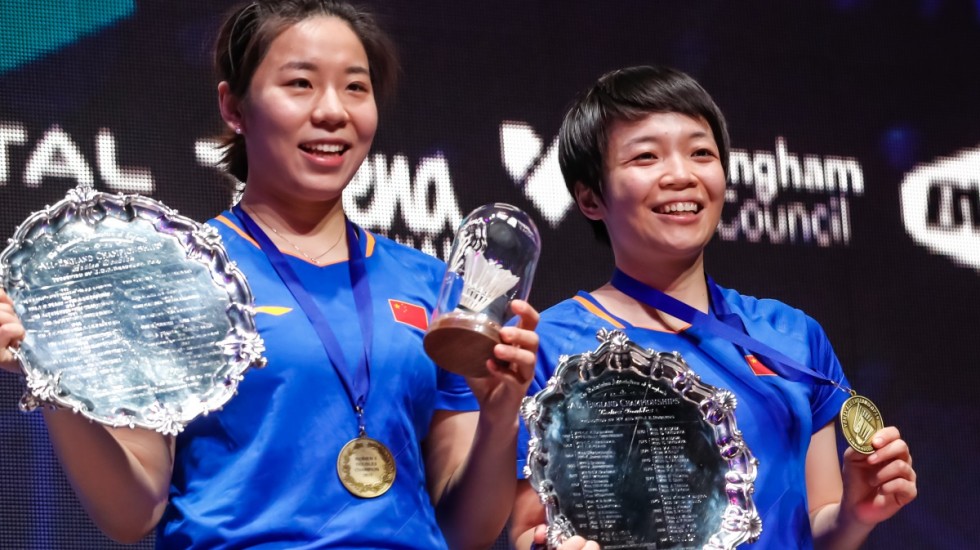 Chen Qingchen and Jia Yifan broke Japan’s domination of the HSBC BWF World Tour, capturing their first Tour title in over a year at the YONEX All England Open Badminton Championships 2019 today.

The powerful attacking game of the Chinese put paid to the hopes of world champions Mayu Matsumoto/Wakana Nagahara, with Chen and Jia easing home 18-21 22-20 21-11.

Not since the All England last year – when Denmark’s Christinna Pedersen and Kamilla Rytter Juhl triumphed – have a non-Japanese pair won a major Tour title in women’s doubles. This Chen and Jia did with an exhibition of relentless attacking badminton.

The outcome looked different at the end of the opening game, with Matsumoto and Nagahara settling in to play the long rallies characteristic of the Japanese. They had the clear edge at 18-16 in the second, but the Chinese continued to pour on the attacking pressure until gaps were found in the fortress.

With the second game in the bag the Chinese continued to ride the momentum, gaining in confidence as the Japanese’s usually strong defence unravelled. The third game was all China’s, with Chen and Jia running riot and blowing holes at the other end with their heavy smashes.

“Once they got into rhythm they carried on in the third game. Their game was very powerful and we tried to contain them but could not,” said Matsutomo.

“Amazing,” said Jia Yifan. “We didn’t expect to go this far. We had a lot of challenges on Wednesday and Thursday. We stuck to every point and never gave up. We were also lucky on a few points. We were lucky we got the key points.”