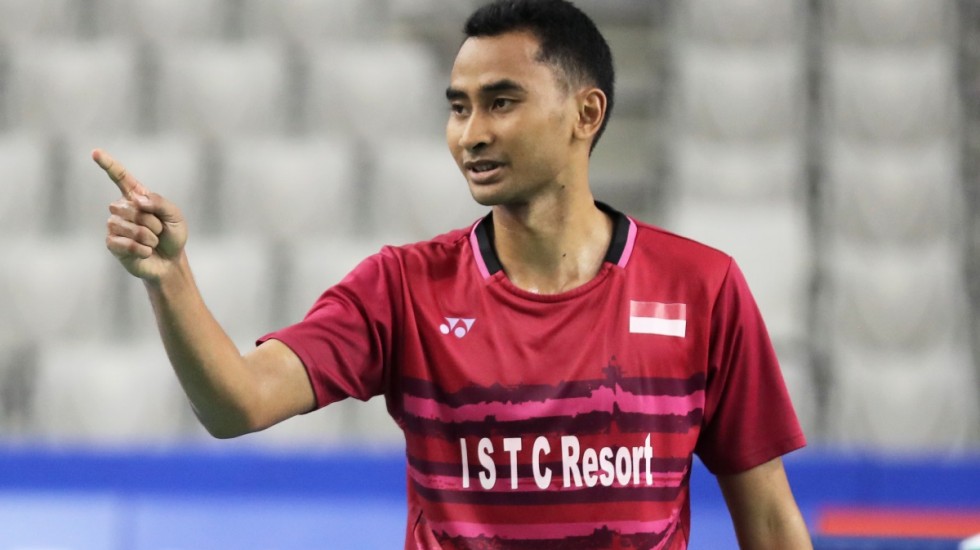 Sugiarto, 30, nine years senior to Christie, used his experience to thwart the recent Asian Games champion in straight games, 21-13 22-20, providing a twist to the narrative of recent months which has been dominated by the emergence of a new generation of champions. Sugiarto will face Chinese Taipei’s Chou Tien Chen in tomorrow’s final.

The soft-spoken Sugiarto (featured image) acknowledged he’d made a point by making the final: 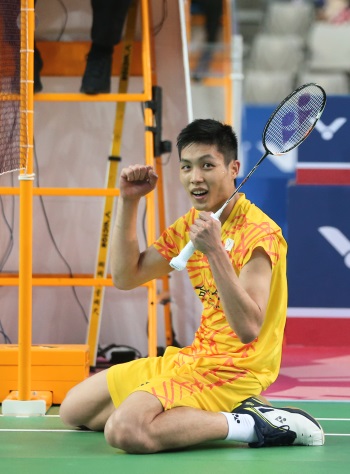 “I’m happy I beat the Asian Games champion – I couldn’t represent Indonesia at the Games, but at least now I can try to win this title for Indonesia. We know each other well. Obviously I won because of my experience, but more than beating him, I’m happy that Indonesia is in the final.”

Chou did well to keep his head despite losing a fair lead in the second game – at 18-all it could’ve gone either way, but once Chou had it wrapped up, Nishimoto suffered a crisis as his opponent strung up a 9-0 lead in the third.

“The conditions were difficult, so we had to focus,” said Chou. “It was a really hard game. I pushed hard on every point. I’m happy with the way I’ve played. It’s been tough with several tournaments this season. My coach in high school was Indonesian, so I have no particular problems playing Indonesians. They are quite skilful, so I will need to focus for tomorrow.”

Japan have two titles in the bag and will vie for a third. Apart from Men’s Singles, the only other category to evade them was Mixed Doubles, which will see Denmark’s Mathias Christiansen/Christinna Pedersen take on Chinese young guns He Jiting/Du Yue. 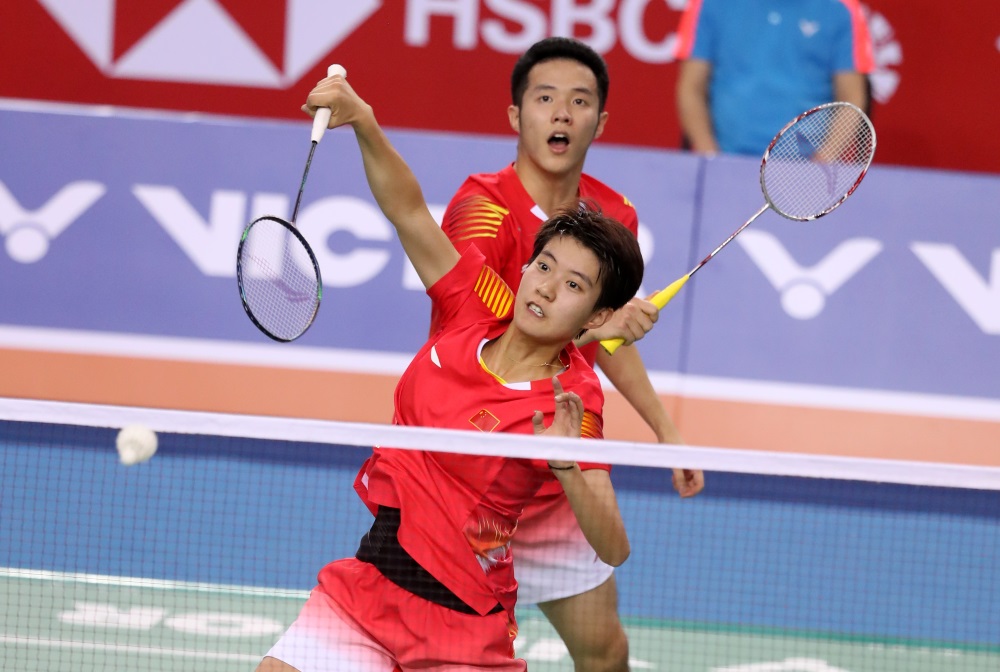 After losing a tight first game, the Danes readjusted technically, with Pedersen being instructed by coach Kenneth Jonassen to hold herself back, mentally, for the deceptive flicks from the net.

“I had a feeling in the beginning that I was a bit too close at the net, and they were a bit too tricky for me, showing they wanted to play short and then pushing it,” said Pedersen. “So we talked about, of course, to be ready at the net, but still be aware that they could push it. That small thing from Kenneth helped me a lot, I felt much more comfortable playing at the net from then on. I was holding back, particularly in my mind. You couldn’t see it from where I stood, but in my mind I was covering it a bit away from the net.

“The match was difficult as expected. They did a good job from the start. I was struggling with my rhythm, but we fought back and we’re proud of this victory. It would be a dream to get one more title. I’m happy that we are in one more final. We haven’t been playing a year together, and we’re already in a final, I’m proud of that.” 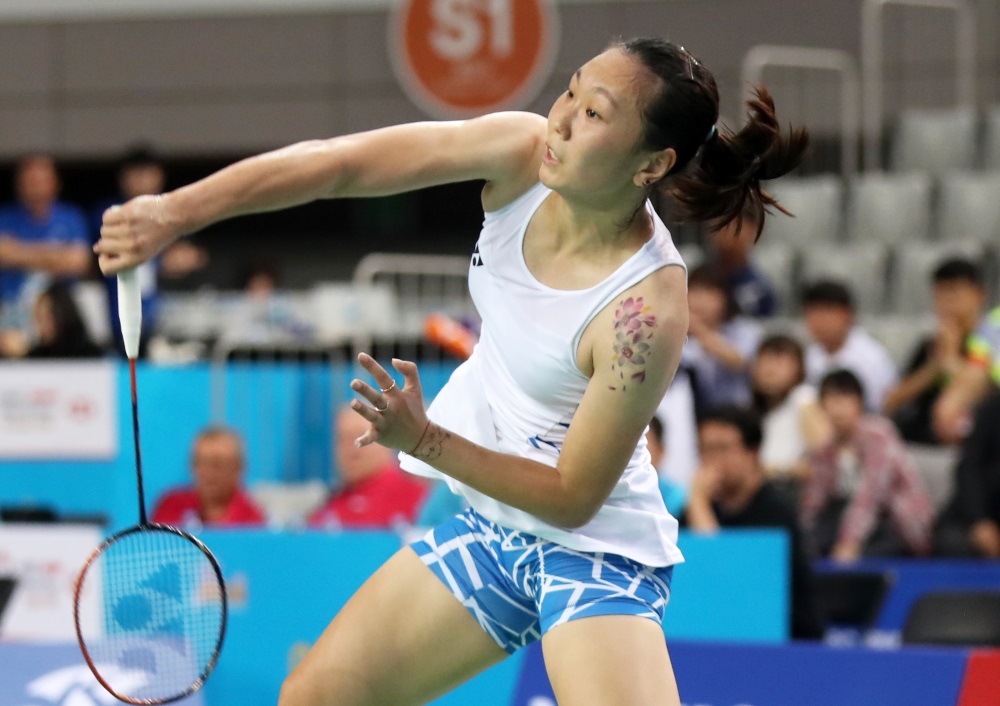 USA’s Beiwen Zhang hadn’t beaten Sung Ji Hyun in three previous matches, but their last encounter had been over a year ago.

In the time since, Zhang’s fortunes have seen an upward swing, while Sung hasn’t had much to cheer about.

Today’s clash reflected that reality, as Zhang made the play and Sung was forced into a reactive mode. The USA player, true to style, played a steady, un-extravagant game, hurrying Sung in the rallies and looking comfortable although the points were close in both games. Zhang had enough fuel in the tank to surge at the end of both games to close it out 21-18 21-19. 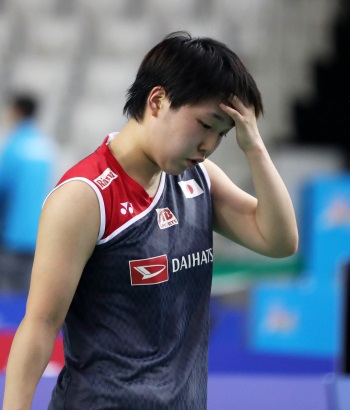 “I wanted to relax and enjoy the match,” Zhang said, after making her third final of the year. “I hadn’t beaten her before, so there was no pressure on me. Maybe she was nervous as she was playing at home. I didn’t think too much even when I was trailing. As I don’t have a coach, I had to be steady and strong mentally. I didn’t have a lot of strategies. She is skilful, so I had to stay focussed.

“I didn’t expect to come so far. I’m just trying to enjoy every match. It was windy in there and I couldn’t control the shuttle, so I had to keep attacking.”

Speaking of her final tomorrow, Zhang said she anticipated a long match.

“I will prepare to run a lot, that’s the hardest part against the Japanese. I will give everything as it’s the last game. I will tape my feet, because I think I will get blisters.”

Sung, a two-time champion in Korea, was upset she couldn’t treat her fans to a final appearance: “I feel so sorry that I didn’t show the performance I wanted to with so many fans here on the weekend.  Still, I have to get ready to bounce back. I was playing in front of my home crowd and the opportunity to make the final came around and I wasn’t able to grab it so it’s really disappointing.”

Okuhara made her second final in three weeks after coming from behind against compatriot Akane Yamaguchi.

Yamaguchi had an uncharacteristic meltdown when she was leading 13-9 in the third; she was able to get just one out of the next 13 points and Okuhara jogged away to victory at 16-21 21-17 21-14. 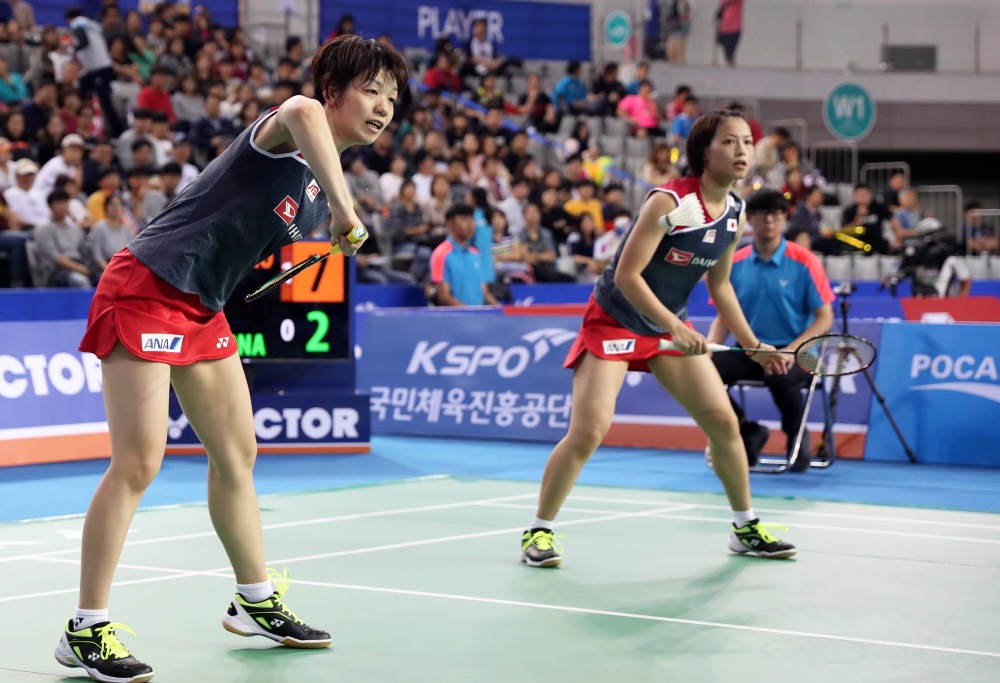 Takuro Hoki and Yugo Kobayashi stopped Korea’s Choi Solgyu/Seo Seung Jae 21-11 21-14 in the day’s opening match; they were joined in the final by Hiroyuki Endo/Yuta Watanabe who were just as comfortable in dispelling surprise semi-finalists Chooi Kah Ming/Low Juan Shen of Malaysia.

Women’s Doubles No.1 pair Yuki Fukushima/Sayaka Hirota will go for their fifth title of the year when they take on last week’s China Open champions Misaki Matsutomo and Ayaka Takahashi.