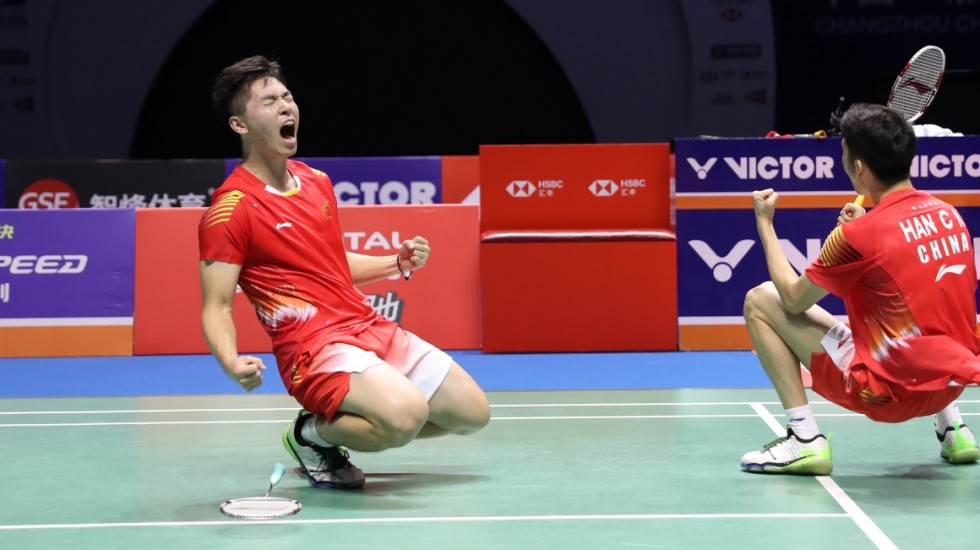 The upcoming Men’s Doubles pair (featured image) staged a giant-killing act, ambushing top seeds Marcus Fernaldi Gideon and Kevin Sanjaya Sukamuljo (Indonesia) 21-19 11-21 21-17 to get to within one win of a Men’s Doubles title victory that nobody would have foreseen.

It was a great day for China overall as they made sure of the Mixed Doubles title and ensured contenders in three other categories.

The Men’s Singles, though, evaded their grasp with World champion Kento Momota progressing smoothly to his season’s seventh final, where he faces Indonesia’s Anthony Ginting.

Ginting had come through an 85-minute quarter-final against Chen Long, and his semi-final opponent 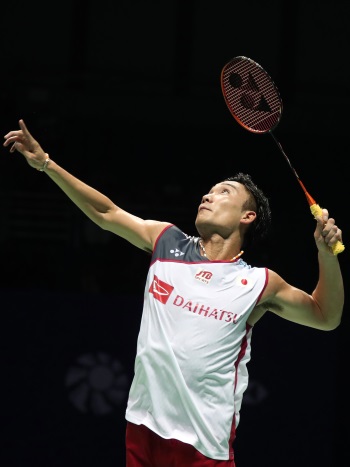 Chou Tien Chen (Chinese Taipei) might have expected that to work in his favour. There were early signs of fatigue, as Ginting appeared to move on heavy feet, and Chou ran up a 15-4 lead before taking the game at 12.

But Ginting’s stubbornness has been a feature of his game; the Indonesian actually started moving better as the match progressed, and with his fleetness of foot, started to apply pressure on the fifth seed. He held a narrow advantage in the second game before Chou fell off the pace in the third, and Ginting coasted from 10-8 to 19-10, effectively burying Chou’s hopes.

“The drift today was just like yesterday,” said Ginting. “I tried to lift the shuttle but it was going out by a huge margin in the first game. In the second, he was playing with the wind, so I got confident. I started controlling the shuttle better as the match went on. I kept it flat and tried to push him around. I felt a bit of tiredness from yesterday’s match, but I kept my focus. Every player faces these situations and they will get tired as the tournament progresses.”

Kento Momota produced another masterclass in taming Shi Yuqi to reach his seventh final this year. The Japanese has won all but one of his previous finals.

It was a performance that was near-perfect – so little did Momota give away that Shi faltered even on routine shots. The Chinese was blown away in the first as he frequently scrambled to retrieve the slow drop off the jump that Momota sent his way, and struggled to handle the tight net shots that died off the tape. It was 7-0 for Momota even before Shi could gather his wits, and the game went by in a blur as the Japanese’s control of the shuttle, and the sudden shifts of pace, kept him in a reactive mode. 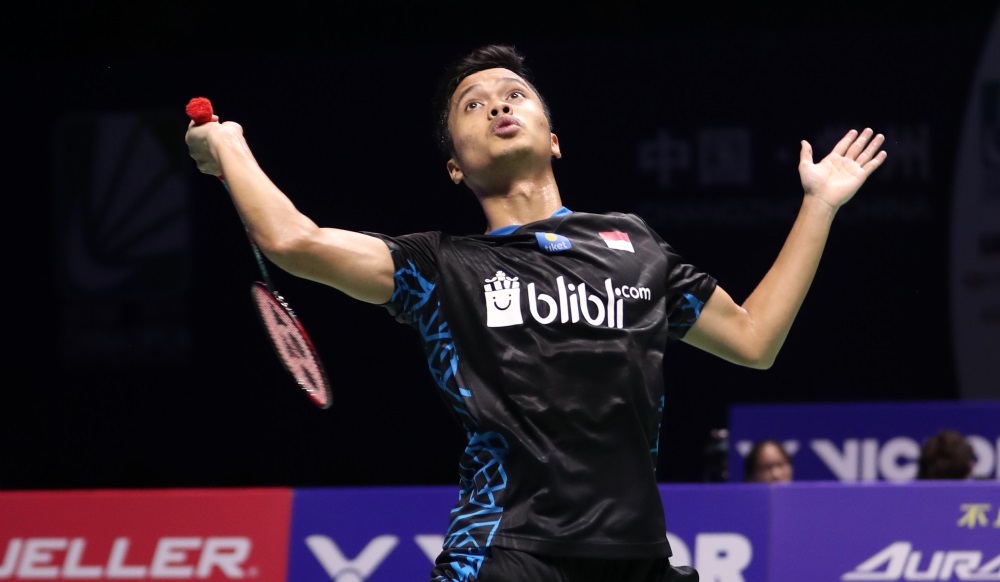 With the change in sides, the tempo shifted. Shi was able to string together some good sequences and even enjoyed a brief lead of 13-11. That wasn’t enough to dent Momota’s rhythm. The slow drop disappeared and in its stead came rasping smashes that punched holes in Shi’s defence, and the match slipped away quickly, 21-10 21-17.

“I was fast coming in to the net and I attacked as much as possible,” said Momota. “I lost to Anthony Ginting at the Asian Games and would like to challenge myself to play my best tomorrow. Last time he attacked a lot and I panicked. I feel a bit tired now, but I will play hard in the final.” 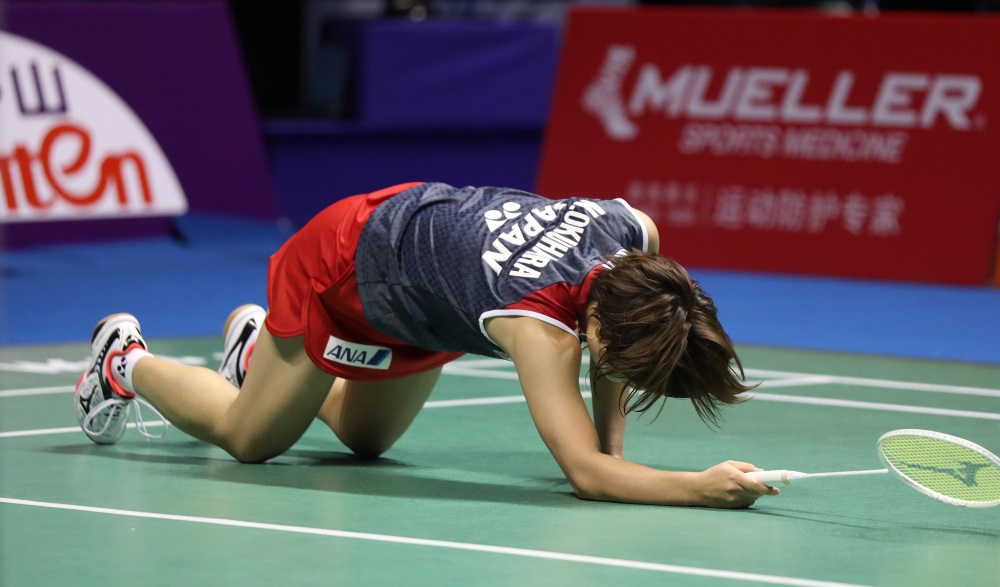 A defining image of the semi-final between Carolina Marin and Nozomi Okuhara will be that of the indefatigable retriever Okuhara lying helpless on the court, not once, but several times with Marin always finding the vacant spot beyond the diving Japanese. Such was the speed and ferocity of Marin’s attack that Okuhara’s defence lay in shreds long before the final point went Marin’s way, 15-21 21-12 21-13.

If Momota had been all craft, Marin’s performance, especially in her dominance of any shuttle in the air, exuded a menace that Okuhara could never shake off. In the air and at the net, Marin hustled Okuhara out of position and fired winner after winner.

Standing in Marin’s way for a third straight title will be Chen Yufei, who reached her third major final with an efficient performance over Japan’s Akane Yamaguchi, 21-14 15-21 21-14. Chen never let her grip on the proceedings falter, and her consistency wore down Yamaguchi, who made some uncharacteristic errors towards the end.

“I played more decisively in the match, both against and with the wind,” said Chen Yufei. “I was quite confident and resolute. I feel very excited right now, but I must start preparing for tomorrow’s final.”

Having fallen in the finals of the Badminton Asia Championships and the Indonesia Open, besides the German Open, Chen Yufei will have her chance to win her first major on home soil tomorrow. 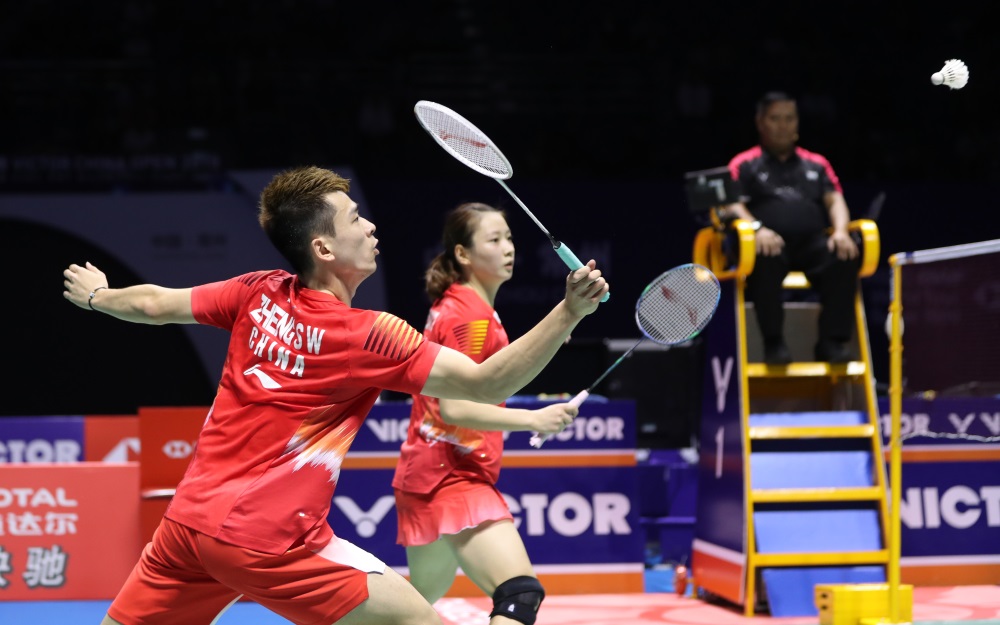 The Mixed Doubles will be an all-China affair as top seeds Zheng Siwei and Huang Yaqiong put out the challenge of Hong Kong’s Tang Chun Man/Tse Ying Suet, 21-19 21-15. The World No.1s made their seventh final this year and eleventh since November last year when they started their partnership. Having lost just two finals, the Chinese duo will hope to win their ninth title, and fourth on the trot.

Standing in their way will be compatriots Zhang Nan and Li Yinhui, who reached their first final this year with an upset of Asian champions Wang Yilyu/Huang Dongping, 21-10 19-21 21-14.

Women’s Doubles World champions Mayu Matsumoto and Wakana Nagahara stopped the impressive run of Bulgaria’s Stefani Stoeva and Gabriela Stoeva, 21-16 21-12. The Stoevas had beaten Asian Games champions Chen Qingchen and Jia Yifan yesterday with a powerful attacking performance, but the Japanese were up to the challenge today, and they kept the Bulgarians under pressure for most of the match.