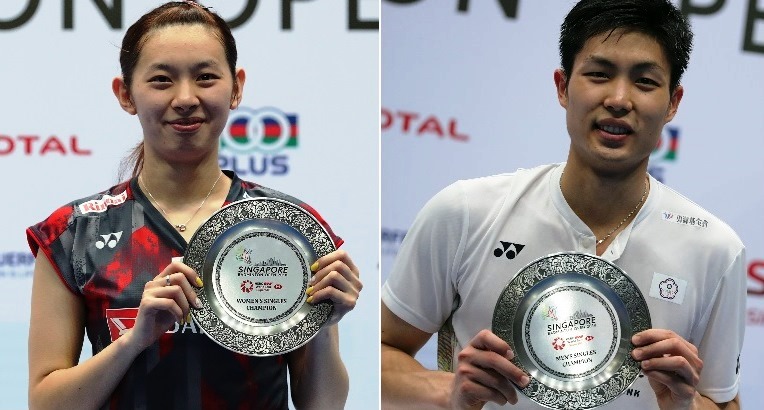 glory that both believe will inspire them in the future.

In Chou’s case he hopes that motivation comes as early as next week when he tackles the best Men’s Singles players for the World Championship title in Nanjing, China. The 28-year-old was speaking in the aftermath of a well-paced 21-13 21-13 victory over his Chinese Taipei team-mate, Hsu Jen Hao, at Singapore Indoor Stadium.

“This will give me a lot of confidence for the World Championships. The last time I won a major Tour title was in 2014. It has been four years – a rather long time since I’ve last won – so this is a breakthrough. I feel that I have been improving and that I can win more titles,” said the top seed who only lost one game throughout the five-round event.

Meanwhile, Takahashi – who turns 26 next Sunday – gave herself an early birthday gift, winning her third title of the year in four finals; the first Japanese woman to win in Singapore.

Takahashi, the younger sister of Japan’s Olympic gold medallist Ayaka Takahashi, shared the story of her comeback from injury, revealing that two years ago she was on the verge of quitting badminton. However, she was inspired by her sister’s Women’s Doubles accomplishment at Rio 2016 as well as by encouragement from the older Takahashi.

“My sister said ‘Let’s play badminton together, and let’s win together’. That comment changed me. If she hadn’t said that, I don’t think I would be here,” said the winner who has also been successful in New Zealand and Switzerland this season.