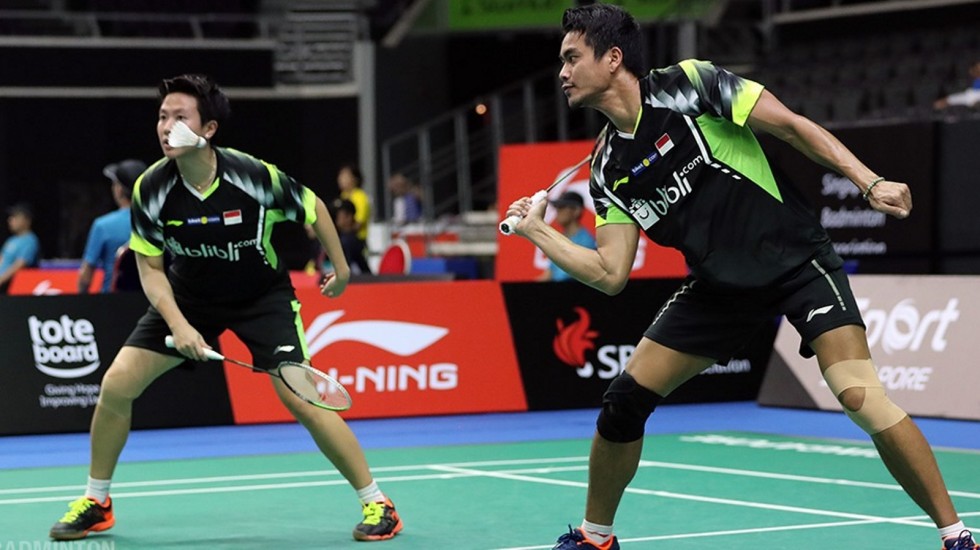 Tontowi Ahmad and Liliyana Natsir’s fabled career almost added an unwelcome chapter today as the Olympic and World champions flirted with serious danger against a pair of their youthful compatriots in the Singapore Badminton Open 2018 semi-finals.

In fact, the top seeds had to save two game points versus Akbar Bintang Cahyono and Winny Oktavina Kandow in the first game before scrambling

into the lead on their fourth opportunity. The vastly experienced duo pulled themselves together after the change of sides and, seizing the lead from 8-8, maintained their advantage until the winning point.

Sighing with relief, Ahmad and Natsir (featured image) were thankful to escape with their reputations intact and the score in their favour: 26-24 21-17 in 31 minutes.

“We kept making a lot of easy errors and, of course, they wanted to beat us. They were attacking well and I was thinking ‘No, we can’t lose this match. We are senior’,” said Natsir, a bit of ego kicking in.

“At the start of the second game I told Tontowi that we need to focus more, so then we were able to control the match.”

Smiling, Natsir acknowledged that they were lucky to get through the first game which put pressure on Cahyono and Kandow. Ultimately, that played into her and Ahmad’s hands against junior rivals in their first outing at this level. The result put Natsir into her eighth Singapore final and Ahmad into his fourth.

They will be in uncharted territory in the final, facing Malaysia’s Goh Soon Huat and Shevon Jemie Lai for the first time. The No.2 seeds won their semi-final efficiently against Thailand’s Dechapol Puavaranukroh and Sapsiree Taerattanachai (21-18 21-14) and are relishing a great match against the esteemed Indonesians. 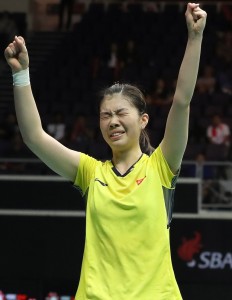 The tall 19-year-old elevated her attack in the decider as her opponent’s resistance waned, eventually triumphing 21-15 12-21 21-14 in 66 minutes. Flashing back to the hard-fought, China-Thailand Uber Cup semi-final in May, an emotional Gao recalled the bitter lessons learnt from that defeat by Jindapol; lessons that served her well this time around.

“It was painful but gained a lot of experience from that match. I learnt the importance of being mentally strong and handling pressure in a big tournament. I wanted to win today and I was mentally stronger,” noted the blossoming Chinese player.

There was also a show of mental prowess from 25-year-old Sayaka Takahashi who advanced to challenge Gao in the championship match by ousting another Chinese youngster, Han Yue. The Japanese overcame a poor start to grab command of their semi-final, showing off a wide-ranging shot selection that earned her a 21-18 21-14 victory.

“I felt tired at the start but then I started thinking positively and that change in mindset helped me win,” explained the left-hander who climbed from 11-16 down to take the first game.

Takahashi, who will be competing in her fourth final this season and hunting her third crown, said she will have to be patient against Gao and wait for her chance to attack. 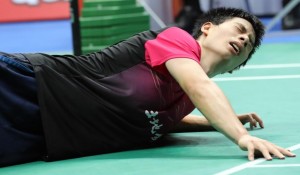 Winning 21-15 21-11, Hsu collapsed on court at the end and later declared “I feel like I just finished a marathon”.

“I have played Tien Minh 4-5 times and I have never defeated him before now. Today’s match was about who had more patience and better stamina. I am younger so maybe I had an advantage in terms of stamina, but he was a really good opponent. He was injured but he continued to rally with me, it was quite unbelievable,” said Hsu.

A disappointed Nguyen said he felt he could still win the match despite the first-game setback but the decisive factor was that the 35-year-old got cramp in his right thigh which hampered his movement.

Though the Vietnamese failed in his quest, veterans will still have a voice in tomorrow’s final with 30-year-old Mohammad Ahsan and Hendra Setiawan, aged 33, progressing to a Men’s Doubles showdown with a pair of younger Chinese. The Indonesians swept past their countrymen, Angga Pratama/Rian Agung Saputro, 21-16 21-13, to give themselves a shot at the title. Shortly, thereafter Ou Xuanyi, 24, and 19-year-old Ren Xiangyu held off their fellow Chinese, Han Chengkai, and Zhou Haodong (21-17 26-24).

“We did not expect to be in the final, especially as we are a new pair. We just wanted to do our best in every match. We won’t focus on who our opponents are in the final but just trying to win every point we can,” said Ou. 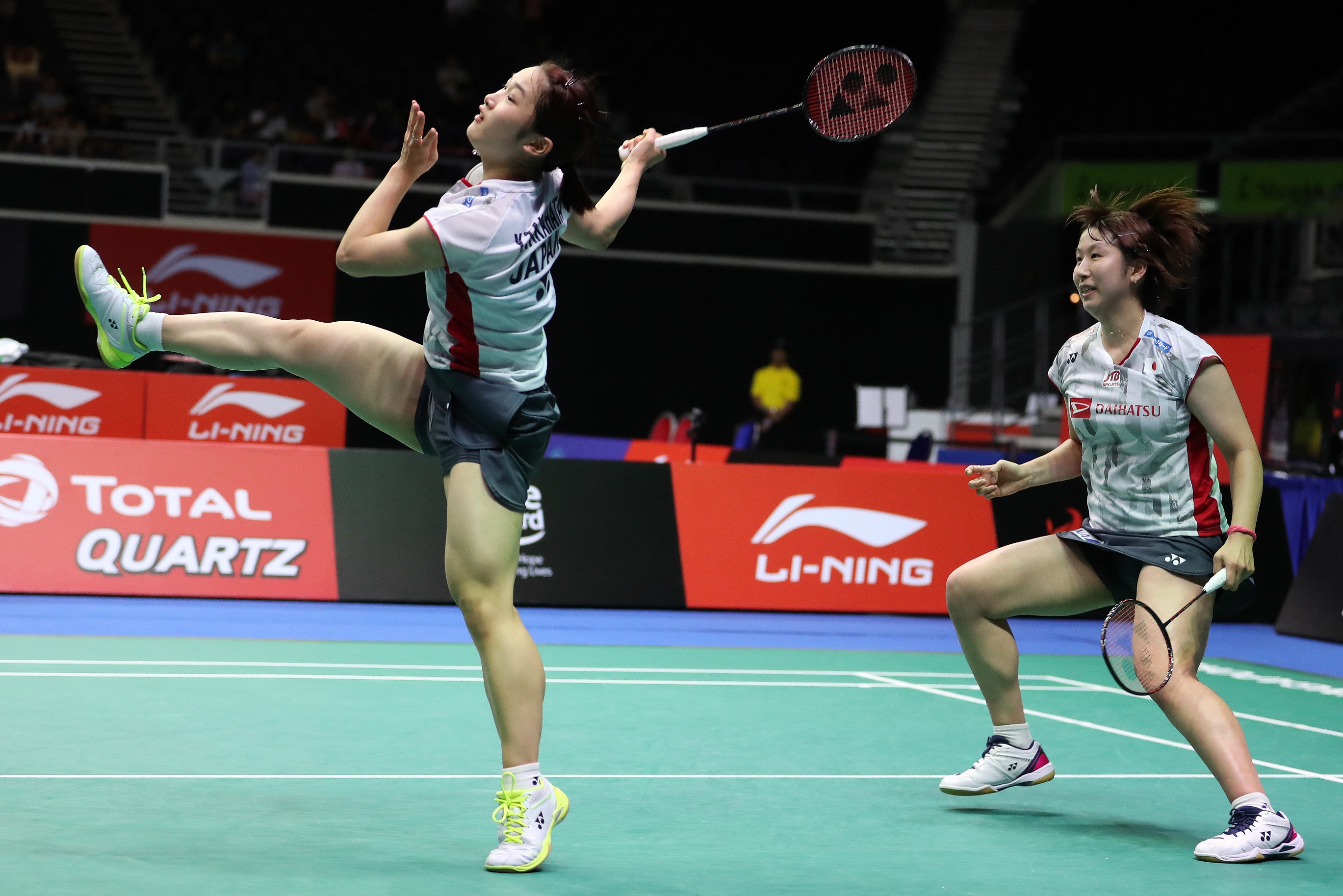 In Women’s Doubles, Japan’s production line of successful combinations was to the fore again as Ayako Sakuramoto/Yukiko Takahata and Nami Matsuyama/Chiharu Shida confirmed an all-Japan tussle for the title. Sakuramoto and Takahata dismissed Thai top seeds, Jongkolphan Kititharakul and Rawinda Prajongjai, in straight games (21-17 21-19) to reach their fifth Tour final in five events; having won all four previous finals. Matsuyama and Shida bounced back from dropping the second game to thwart Germany’s Isabel Herttrich/Carla Nelte (21-18 17-21 21-16).