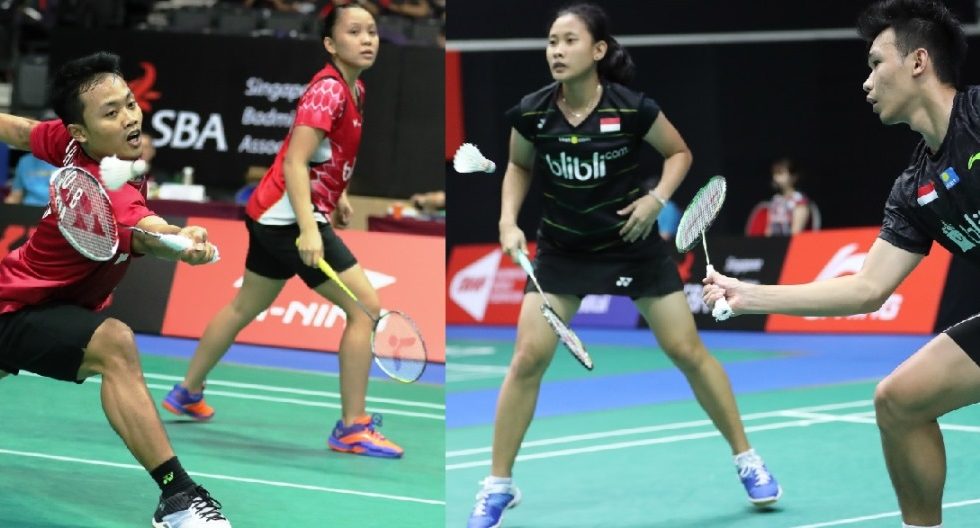 Inspired by their star-studded seniors, two young Indonesian pairs beat the best of Germany in Mixed Doubles this afternoon at the Singapore Badminton Open 2018 – with two England tandems losing later too.

Unfolding along similar storylines, the Germany-Indonesia matches saw the more experienced Europeans seize the ascendancy, only for their youthful rivals to fight back courageously, forcing and winning decisive third games – much to the delight of their coach Vita Marissa. Having been elevated to the top flight this season, the reigning World Junior champions – both 19 years old – displayed a calmness and resolve beyond their age to topple the No.5 seeds who had fancied making a deep run at this tournament.

“We are excited to reach the quarter-finals. We needed time to adapt to the court situation in the first game. In the second game, we turned things around and we focused on attacking Herttrich,” said Rivaldy.

In her assessment, Herttrich lamented that she and Lamsfuss squandered a good start.

“I don’t know what happened after. It is a big disappointment. We expected more. We wanted more. The draw was not bad and we felt we could win this,” she said ruefully; her partner adding that Rivaldy played well in mid-court with hard, flat shots.

The dust had not settled on this drama before Indonesia caused further headaches for Germany. This time it came in the form of Akbar Bintang Cahyono and Winny Oktavina Kandow (featured image; left). The latter overcame some nervous moments to down Marvin Emil Seidel and Linda Efler – 17-21 21-17 24-22 in 54 minutes.

Having been called for a service fault on their first match point, Cahyono then fought doggedly with his partner to save two match points for the No.6 seeds; the Indonesians grabbing victory the second time around.

“We were the underdogs but we believed that we could beat them and we are very happy,” declared 19-year-old Kandow.

Both pairs gratefully acknowledged the influence of Olympic and World champions, Tontowi Ahmad and Liliyana Natsir – the top seeds who had earlier cruised to the quarter-finals – not only for motivating them but also for providing priceless insights.

“They are inspiring and they give us advice on how to prepare for specific opponents and their styles of play,” noted Cahyono, aged 22. England also fared badly in Mixed Doubles, losing two exciting and tough battles. Marcus Ellis/Lauren Smith went down to Liao Min Chun/Chen Hsiao Huan in tight games (23-21 27-25) which could have gone either way. The Chinese Taipei winners saved two game points in the opener and held off the No.3 seeds in a nail-biting finish which saw some fast-paced exchanges, especially between Ellis and Liao who stared each other down at net.

Later in the evening, fate was again not kind to England as Chris and Gabby Adcock fell short versus the resurgent Dechapol Puavaranukroh and Sapsiree Taerattanachai. The latter had three chances to win in straight games but, to their credit, the Adcocks hung in and forced a decider. Another see-saw struggle ensued and, just when it looked like fortunes were swinging the No.4 seeds’ way at 14-10 up, their Thai rivals struck back and stayed within a point of the Commonwealth champions until 19-19. It was then Taerattanachai rose to the occasion, intercepting the shuttle at net to earn a fourth match point. She then flick-served to Chris Adcock who soared backwards to snap a left-handed smash which flew wide; victory to Thailand, 21-18 25-27 21-19, in 75 minutes!

“We were nervous at the end of the second game. We couldn’t focus and we were not confident with our service,” said Taerattanachai, estimating they are 80 per cent back to their normal standard. From a European perspective, it was a horrible day at the office with only Germany’s Women’s Doubles contenders, Herttrich and Carla Nelte, reaching the quarter-finals. Among the other casualties were Beatriz Corrales (Spain; Women’s Singles); Peter Briggs and Tom Wolfenden (England; Men’s Doubles) and Chloe Birch/Jenny Moore (England; Women’s Doubles).

The big news in Women’s Singles was the demise of Michelle Li whose four weeks on the road showed in a tired effort versus Minatsu Mitani. The former top-ten player showcased her trademark resilience in ousting the Canadian, 21-14 21-14.

“My movement and my serve were good. I have been injured but I hope to keep playing well now and to get back to the highest level of competition,” said the 26-year-old Japanese; her right knee heavily strapped.

She faces her compatriot, Sayaka Takahashi, for a semi-final berth while China is also assured of a semi-finalist, with Cai Yanyan and Gao Fangjie, battling each other tomorrow. Their team-mate, Han Yue, clashes with Yulia Yosephin Susanto, and No.2 seed, Nitchaon Jindapol of Thailand, takes on Chinese Taipei’s Chen Su Yu. The Women’s Doubles quarter-finals will feature top seeds, Jongkolphan Kititharakul and Rawinda Prajongjai (Thailand), against China’s Tang Jinhua/Yu Xiaohan, while another pair from either country as well as two Japanese partnerships are in the mix to determine the other semi-finalists.

There will be two Indonesia-Thailand clashes in the Men’s Doubles quarter-finals while China are up against rivals from Chinese Taipei and Malaysia in the other two fixtures.