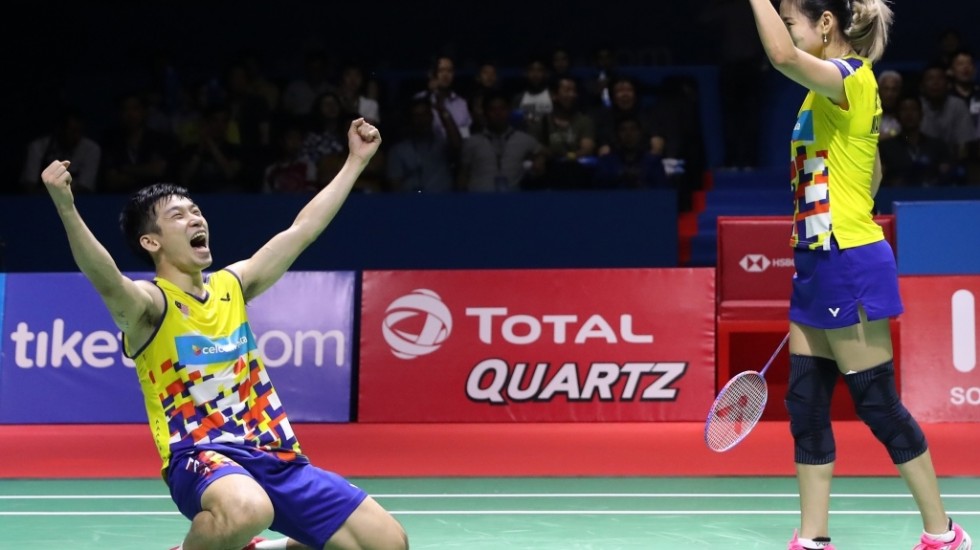 An ecstatic Goh Liu Ying today savoured her latest success in another comeback from injury – winning the net battle versus Huang Yaqiong as she and Chan Peng Soon (featured image) became the first Malaysian pair to reach the Mixed Doubles final in Indonesia.

Their 21-18 21-16 triumph against the in-form Huang and Zheng Siwei in the semi-finals of the BLIBLI Indonesia Open 2018 propelled them into tomorrow’s title-decider; a tantalising showdown with the defending champions and darlings of Indonesian badminton, Tontowi Ahmad/ Liliyana Natsir. The latter brushed aside their younger team-mates, Hafiz Faizal and Gloria Emanuelle Widjaja, 21-18 21-8, in an anticlimactic encounter.

It will be the first meeting of the two pairs since Ahmad and Natsir beat their south-east Asian neighbours for gold at the Rio 2016 Olympic Games.

Despite the high of this afternoon’s victory, the challengers are under no illusions about what they will face in the final: a lop-sided 9-1 head-to-head record in the Indonesians’ favour plus a tidal wave of home support for the reigning duo.

“We expect to play against not only them but the whole stadium,” quipped Goh, chuckling as she and Chan fielded questions from reporters.

Having endured knee and shoulder injuries that have required surgery in recent years, the 29-year-old is no stranger to adversity and vowed to continue fighting her way back to her best form. Her steely determination was to the fore as she and Chan produced late surges in both games to upstage the Chinese who won the CELCOM AXIATA Malaysia Open 2018 last weekend. Goh’s performance was complimented by Huang who conceded that her rival got the better of her at the net.

“She (Goh) is more experienced than me and her awareness is very good. We couldn’t counteract that and we lost focus from there,’ said Huang.

For her own part, Goh revealed that she went into the match well prepared for the fight up front.

“I really analysed her (Huang) net play, so I am quite happy about how I handled that as well as how we played overall. This is very satisfying,” said the player who contemplated retirement amid repeated injuries.

Retirement is also on Natsir’s mind but the iconic 32-year-old yearns for some more silverware before she calls it quits – and the US$92,500 winners cheque will do nicely also!

Meanwhile, the finals will showcase other riveting clashes, with world No.1 Viktor Axelsen keen to become only the second European to be crowned Men’s Singles champion in Jakarta, following his Danish compatriot, Jan Jorgensen’s 2014 conquest. Axelsen fought back to down China’s Shi Yuqi, 18-21 21-14 21-11, in the semi-finals. His quest for glory does not get any easier as Kento Momota lies in wait. The 23-year-old Japanese has rocketed up the rankings and back into the headlines in recent months and tonight earned more praise in an attacking rout of Malaysian veteran Lee Chong Wei: 23-21 21-12. “I am proud that I performed well in this important match. To be in the final at Indonesia Open is a dream coming true for me,” said Axelsen, adding that he is “as ready as can be” for the final and is very motivated to win what he expects will be another tough match.

Elsewhere, Chen Yufei set up an intriguing finale versus Women’s Singles queen, Tai Tzu Ying. While the Chinese Taipei top seed produced another polished display – dismissing China’s He Bingjiao 21-13 21-18 – Chen had to work hard for her first appearance in a top-level tour final. At 13-18 down in the decider, the 20-year-old Chinese refused to give up and clawed back into reckoning versus last year’s Indonesia Open runner-up, Sung Ji Hyun; winning ten of the last 13 points.

“I am so thankful to win. This is a big milestone for me. I have matured a lot over the past year and I am trying to be more consistent with my training and other things like my diet,” said a smiling Chen.

By contrast, the vanquished Sung rued her missed opportunity, citing indecision and “playing too safe” at critical moments for her downfall.

Having dodged danger in the quarter-finals, Indonesia’s Men’s Doubles top guns, Marcus Fernaldi Gideon/Kevin Sanjaya Sukamuljo, are dead-set on grabbing their opportunity for a first Indonesia Open crown. The top seeds will oppose Takuto Inoue/Yuki Kaneko of Japan for the title, after blowing past their compatriots Fajar Alfian/Muhammad Rian Ardianto (21-13 21-10) this afternoon. The Japanese are already assured of the Women’s Doubles honour with Mayu Matsumoto and Wakana Nagahara across the net from their team-mates, Yuki Fukushima and Sayaka Hirota. The former stunned defending champions and top seeds, Chen Qingchen/Jia Yifan, 21-13 21-18, to reach the Super 1000 final while Fukushima/Hirota outlasted their peers, Misaki Matsutomo/Ayaka Takahashi (25-23 12-21 21-13).