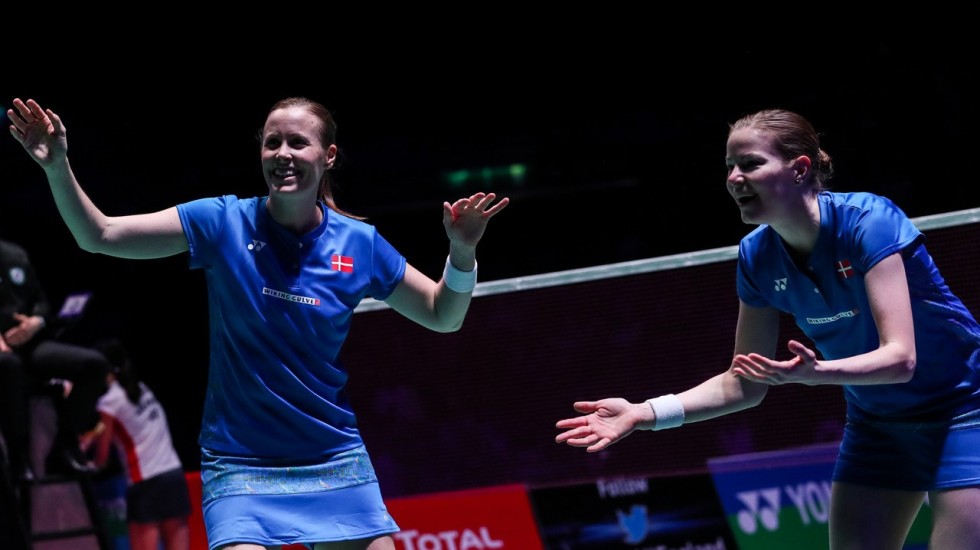 It’s beginning to look a lot like last year’s All England finals as two winners and two runners-up from a year ago advanced to tomorrow’s showpiece in Birmingham earlier today.

Results of the morning’s semi-finals of the YONEX All England Open Badminton Championships 2018 saw Marcus Fernaldi Gideon/Kevin Sanjaya Sukamuljo earn a crack at defending their Men’s Doubles crown while Tai Tzu Ying came through a testing bout to leave her one win away from retaining the Women’s Singles title. There was also happy hunting for Denmark’s Women Doubles titans, Kamilla Rytter Juhl/Christinna Pedersen (featured image), and Men’s Singles player, Shi Yuqi; both securing another opportunity to amend for their runners-up conclusions at the 2017 All England tournament.

The Danes – who lost to Chang Ye Na/Lee So Hee of Korea last March – again triumphed over another new combination in the Asian production line of Women’s Doubles partnership. On this occasion, it was the turn of young guns Mayu Matsumoto/Wakana Nagahara to try to break down the steely European champions and though the Japanese saved two match points, they yielded to the third as Juhl produced some big shots in the dying exchanges.

“We are so pleased to be in the All England final again. They were fun to play but also difficult. There were ups and downs. When we were struggling, we tried to fight our very best and that’s why we still had the chance to win the second game, though we were two or three points behind,” said Pedersen after the 21-15 22-20 victory.

The effervescent pair was all smiles as they contemplated the chance to put their hands on the coveted silverware. However, the veterans agreed the final against another Japanese duo – either Shiho Tanaka/Koharu Yonemoto or Yuki Fukushima/Sayaka Hirota – will be a challenge whomever they face.

“They are much the same style of play. It’s going to be tough either way. Both pairs have played some big finals,” said Juhl.

Men’s Singles finalist, Shi Yuqi, was equally thrilled to reach the showpiece final again, with a comfortable 21-17 21-14 win over Son Wan Ho. His triumph ensured this year’s championship will go to China as six-time All England king, Lin Dan, takes on compatriot Huang Yuxiang in the other men’s solo semi-final.

“This is my second time in the All England Open final and I focused on my technique. I felt very relaxed,” said 22-year-old Shi who screamed with excitement as he secured match point.

Meanwhile, Gideon and Sukamuljo are keen to continue their All England reign, noting they have “prepared so much for this tournament”. Today, the Indonesian champions prevailed in two contrasting games versus Mads Conrad-Petersen/Mads Pieler. Having breezed through the first with their trademark brand of crisp, flamboyant attacks, the title-holders had to dig deep, fighting their way from 7-11 down in the second game to wrestle control at 14-14 and maintain their advantage for a 21-11 21-19 passage into the final.

“It means a lot for us to be back in the final. Sometimes we feel pressure because we are No.1 and everybody wants to beat us but we remain focused on our goals and on playing our best. Tomorrow will be challenging, whoever we play. It doesn’t matter,” said 27-year-old Gideon.

That sentiment held true for Tai who was relieved to battle another day after Chen Yufei threatened a significant upset. The ever-improving Chinese player extended her Chinese Taipei rival to three games which spanned 64 minutes before the crafty Tai triumphed 21-15 20-22 21-13. Chiding herself for being impatient and trying to end the match quickly, the 23-year-old top seed blamed that indiscipline for a rash of errors in the second game which saw her talented opponent grab four game points. To her credit, the world No.1 fought back tenaciously to 20-20 but Chen took the next two points to necessitate a decider. Tai wasted little time in stamping her authority on the third game, increasing her lead after switching sides at 11-8.

“In the last few points of the second game I came back but I couldn’t handle her attack, so that cost me. In the third, I think both of us were quite tired. I tried to control my game and make sure I played steadier manner. I’m happy I won,” said Tai, complimenting Chen for being a worthy adversary. The lone departure from the script of repeat finalists was the success of Yuta Watanabe and Arisa Higashino in their Mixed Doubles semi-final. Facing star veteran, Zhang Nan, and Li Yinhui – the No.8 seeds – the young Japanese played fearlessly and seized their chances to wrap up matters, 21-14 21-18, in 43 minutes to earn their first appearance in an All England final.

Away From Puzzling Opponents, Tai Works on Jigsaw 14 May 2020

A Time to Create Music, for Teen Talent Lauren Lam 7 May 2020

@bwfmedia
Are you a Tai Tzu Ying fan? Then this quiz is for you!…