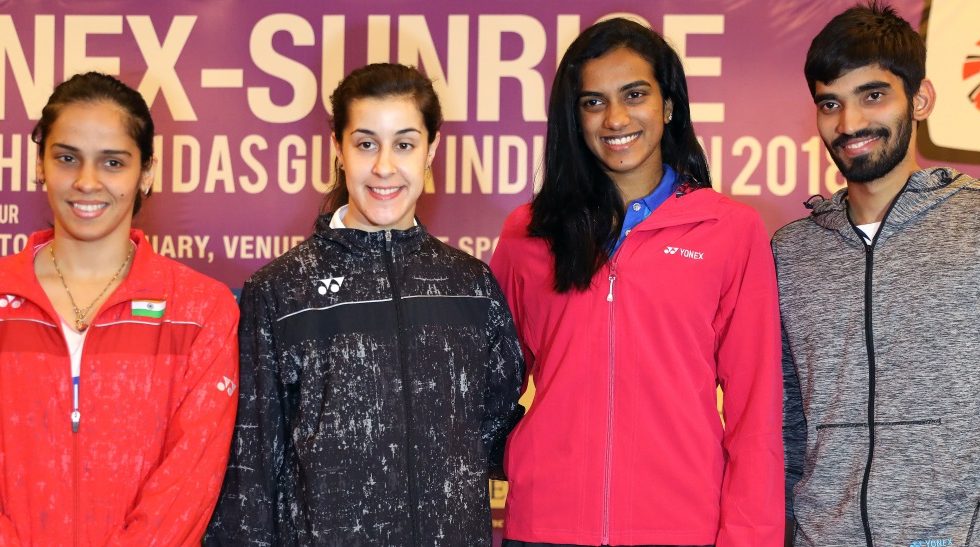 The HSBC BWF World Tour moved into New Delhi this week for the Yonex-Sunrise Dr Akhilesh Das Gupta India Open 2018, with the country’s most popular stars confident of living up to expectations.

Saina Nehwal, Pusarla V Sindhu and Kidambi Srikanth lead India’s challenge into an event they have each won; for Nehwal in particular, this week would be a good test to see if her form holds, as she was runner-up in Indonesia last week.

The Indian was mostly out of the limelight last year, but 2018 seems to

have begun well with some impressive performances in Indonesia. The fourth seed’s biggest challenge early on could be the quarter-finals, against USA’s Beiwen Zhang, followed by a likely semi-final against Spain’s Carolina Marin. A Nehwal-Pusarla final is a strong possibility; but players like Marin and Zhang in the lower half and Thailand’s Ratchanok Intanon in the top half could play spoilsport for the home crowd. The dark horse to watch out for is China’s Gao Fangjie, runner-up at the China Open last year, who is in Marin’s quarter.

Nehwal was happy with her showing in Indonesia and said she was simply looking at staying fit during the season.

“I’m looking forward to train hard and stay fit. I had only six good training sessions with Gopi Sir (head coach Gopichand) after the Premier Badminton League. I wouldn’t say I’m one of the contenders here as my results last year weren’t (exceptional)… but I’m happy with my results in Indonesia.”

Kidambi stated that recent months have seen him battle injury and he was being cautious during the start of the year. Kidambi is seeded second, and will have to be wary of Hong Kong’s Lee Cheuk Yiu in his opening encounter. His quarter-final challenge might come from compatriot Sameer Verma or Denmark’s Anders Antonsen, while China’s Shi Yuqi or Chinese Taipei’s Wang Tzu Wei are possible semi-final contenders.

At the press conference today announcing the start of competition, Devender Singh, Senior Vice-President of Badminton Association of India, welcomed participants to the tournament. He touched on the efforts of BAI to spread the sport throughout India: “We are proud to host this event. We’ve been trying to create an eco-system to identify and nurture talent,” Singh said. “We would like academies in all parts of India.” BWF Vice-President – Pan Am, Vishu Tolan, stated that he expected some great matches during the week: “Hold tight, sit back, and enjoy the ride! We can expect some fireworks, especially on the women’s side.”

Tolan extended thanks to all those who had worked towards the event: “Thanks to BAI for hosting this tournament. Thanks to our sponsors, volunteers and tournament officials. I look forward to some great games.”

In a message, Jayant Rikhye, Group General Manager and CEO of HSBC India, said: “We are proud to be associated with the Badminton World Federation as the Principal Global Partner for the HSBC BWF World Tour. We are committed to supporting this journey and taking this sport to a wider audience in India, across Asia and beyond, through this global partnership with BWF. In India, we are especially thrilled to partner with the prestigious BWF badminton event, the India Open 2018.”