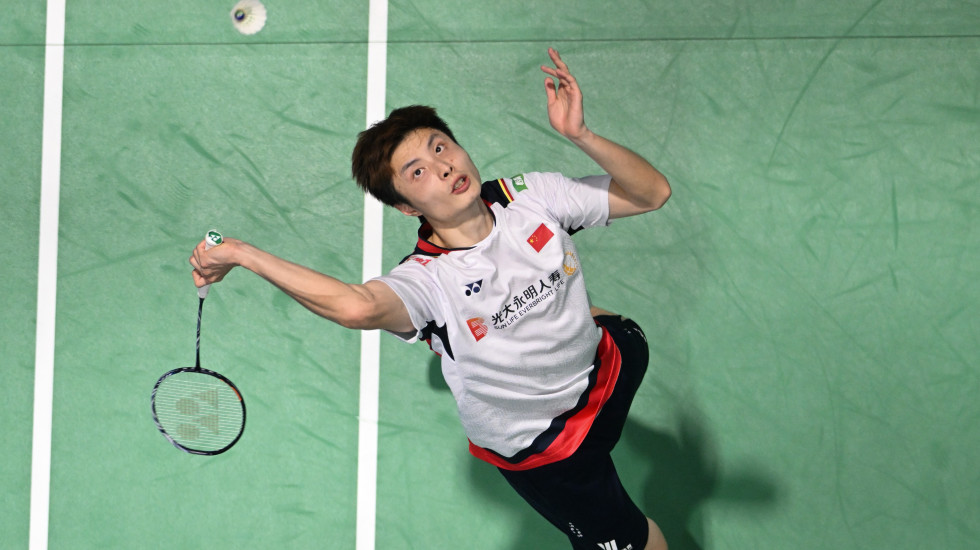 The Chinese world No.29, who had returned to competitive badminton in August after a 10-month layoff, had won the Denmark Open last month. After first round exits at the French Open and the HYLO Open, Shi stormed past compatriot Lu Guang Zu in the final today, 19-21 21-18 21-5.

“I am feeling exhausted but luckily I could win the game today,” said Shi. “The process was very important. In the first two games, I could tell that I wasn’t fully recovered from yesterday’s game, but in the third I actually felt more energetic and my footwork was much better so that’s how I won the match.”

The runner-up acknowledged that fatigue had played a role in his defeat.

“In 2018, I won my first World Tour title here so that was early on in my career. Since then, I have been making progress. I wasn’t able to get another one, but this year I have qualified for the BWF World Tour Finals so I will keep fighting. In the third game, I felt very fatigued and felt a lot of tightness so I was making mistakes and I couldn’t prevent Shi Yu Qi from keeping up a good attack,” said Lu Guang Zu.

It was a good day for China overall, as they picked up three titles. Men’s doubles duo Liu Yu Chen/Ou Xuan Yi held off a strong second game challenge from Malaysia’s Ong Yew Sin/Teo Ee Yi, 21-16 22-20. This was their first title since winning the Indonesia Open in June.

The Chinese had a tough path to the final, beating Choi Sol Gyu/Kim Won Ho in the second round in three games, Olympic champions Lee Yang/Wang Chi-Lin in the quarterfinals, and Lee Jhe-Huei/Yang Po-Hsuan in the semifinals in a thriller.

“We haven’t been to a final in a while, and our mentality makes us think too much about the results every time we go to the final,” said Zhang Shu Xian. “This time though, we were trying some different methods. We were not familiar with it when we try it, but we decided to use it, and hoped that there would be a change in this game.”

Korea’s second title came through women’s singles star An Se Young, as she made a successful return after skipping the European leg. The world No.2 eased past Indonesia’s Gregoria Mariska Tunjung 21-17 21-9.