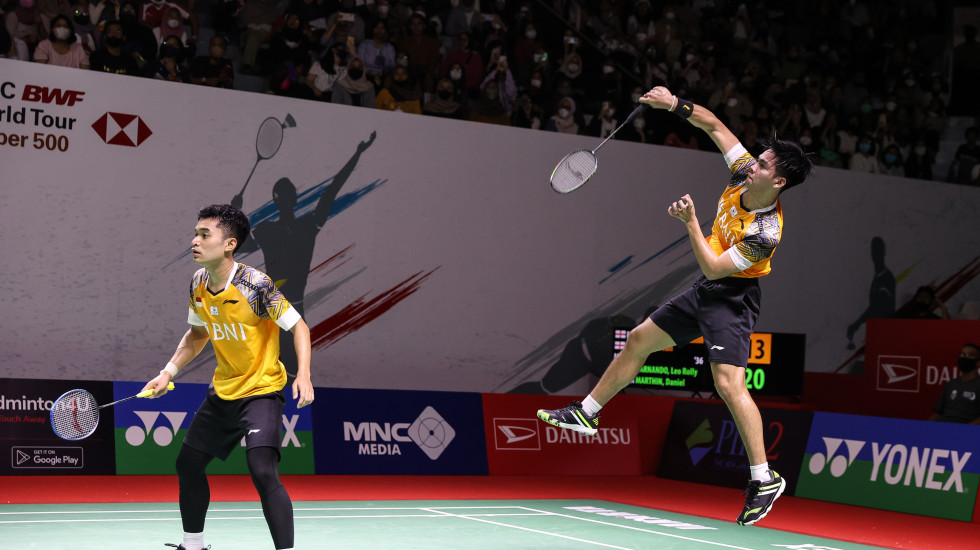 Marthin said the pair took all the chances they could on the opening day to seal their win.

The DAIHATSU Indonesia Masters 2022 opened with a mixed bag of home triumphs and upsets as All England champions Muhammad Shohibul Fikri/Bagas Maulana were dumped out by teammates Sabar Karyaman Gutama/Moh Reza Pahlevi Isfahani 19-21 21-12 21-16 in front of a packed Istora Senayan.

It is the first time Jakarta has seen a roaring crowd in almost three years since the COVID-19 pandemic put paid to spectators attending tournaments in early 2020.

Among those to benefit from home support were Leo Rolly Carnando/Daniel Marthin, who were spectacular against Ben Lane/Sean Vendy, winning 10-21 21-13 21-12.

Post-match, Marthin said: “It was an emotional match for me, defeating a European pair always is but winning at home makes it even more special.

“We just wanted to attack. When we saw chances, we took them.”

Carnando added his delight at having the fans return: “We are happy to have the crowd back and we want to keep winning for them.”

“It was a bit of both of us doing things wrong, and them doing things right. They played well, we were a little shaky in the beginning. It’s always tough in the first round to get your best game going,” said Rasmussen.

“We told each other it was important to enjoy the crowd being back, and we did. We didn’t play the best first game, but during our warm-up, the fans were cheering for us each time we made a move. It’s amazing and we’ve really been looking forward to it for months now. It’s great being here and we are enjoying it.”

Astrup jested: “I enjoyed the warm-up more. The fans were screaming each time we practiced a shot. It was amazing.”

♦ Alongside Kevin Sanjaya Sukamuljo, Marcus Fernaldi Gideon marked his comeback from an ankle surgery with a 21-16 21-19 win over the Popov brothers.